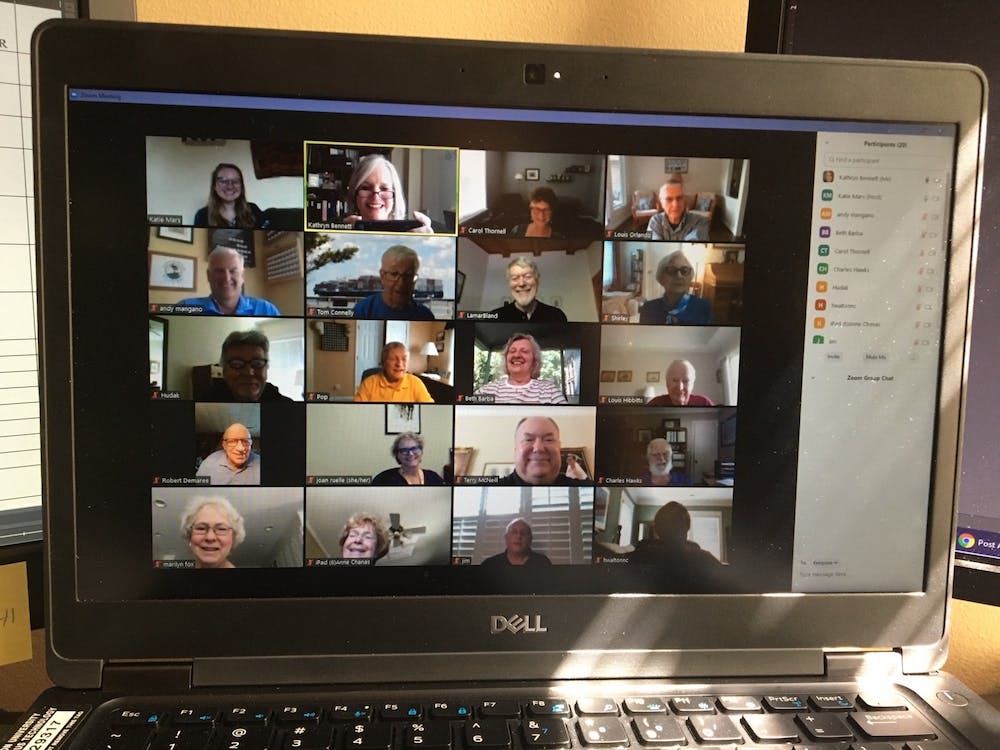 Life@Elon provides senior citizens a chance to continue their education and still has over 300 members from their shift online. An example of a class this year is Zoom101 which shows proper Zoom etiquette such as what to wear, good lighting, and not interrupting others.

The members of Life@Elon are not showing up to class late this semester, even though many of them have never used Zoom prior to the program. They take their pre-class conversation time very seriously.

For a decade, Life@Elon has been helping senior citizens in the Elon community continue their education. Although they can’t meet in their usual home of Johnston Hall because of the coronavirus pandemic, Life@Elon is still promoting their mission of lifelong learning online. For $100, members have access to twelve classes each semester. Even without their mid-class snacks and coffee, the program has had a smooth transition online.

Kathryn Bennett — the program’s coordinator — has been involved with Life@Elon since it started. Originally, the program was targeted at alumni, but after publications in the area picked up the story, their local membership of locals grew immensely due to a high volume of community members wanting to join.

“We decided if we could just get 50, and then the phones started ringing and we had 100 and we were like, ‘what are we gonna do?’’” Bennett said.

Since then the program has grown to nearly 500 members. However, this fall, the enrollment dropped for the first time since the program started. While they had only 350 members sign up, Bennett and her team were still shocked by the return rate after they told members they were transitioning to online classes.

“We were shocked how eager the members were. They didn’t want to stop because of this change,” Bennett said.

Luigi Orlando joined Life@Elon last year and has now become a member of the new technology team. Orlando recently moved from Wilmington where he and his wife were in a lifelong learning program. It became an important part of their life in Wilmington and they wanted to continue in a similar program upon moving to Elon. Overall, Orlando was surprised at the abundance of opportunities..

“Me and my wife were up there on campus three, four times a week [for] Life@Elon, going to lectures, movies, sports or whatever, and I can’t wait to get back to that, ” Orlando said.

Coming from a much larger program at the University of North Carolina at Wilmington, Orlando said he has appreciated the intimacy of the program.

“I have got to know individuals pretty intimately as a result of working on these teams, and that’s connecting. Connecting is key, ” Orlando said.

Trout has been teaching online at Saint Joseph’s University for 14 years. Her past experience with systems such as Zoom and Webex made her an important part of the early steps of development. Once they decided on using Zoom to continue the program, the team attempted to make the app seem much easier to use for members.

“We looked at it all like a funnel. We took all of this information and said ‘how much of it do we need?’ And then went from there, ” Trout said.

Trout said the program leaders decided to prioritize teaching members the basics of Zoom first. They did this by creating a training manual called “Zoom 101.” The training consisted of both videos and writing.

“So we had Zoom 101 training and then additional individual training for those who need it where someone would call them up and talk them through like you would if you called a tech services department, ” Trout said.

The training was broken down into two categories to make it more effective: mobile devices and computers. This allowed the team to make sure that as many people as possible could get involved.

Besides teaching members the basic technology of the program, Zoom 101 also instructed viewers on proper Zoom etiquette such as what to wear, good lighting and not interrupting the speakers. They also plan to launch a “Zoom 201” soon, which will help members discover how to change their background and much more.

The change to online did not alter the structure of the classes. They have four classes a week: two on Tuesdays and two on Wednesdays. Each week there is a new presenter who leads these sessions. Typically in between each class, the presenter will be brought to lunch. Bennett said they knew they wanted to keep this structure as much as possible.

“Some of our members have been here for all ten years and made friends with these people and or they joined because they were friends with people in that class we felt like to keep the community and one way we could do that was by keeping or four class, ” Bennett said.

Throughout the process of transitioning online, the executive team made sure that members would still be able to have the social aspect of this program. Typically, along with weekly classes there are events such as wine tastings and book clubs. This year they have “”Fun Fridays.”

“Fun Fridays are going to be fun little things that we can do so one of our members — our student workers — are making videos so that members can just log in and watch them together, ” Bennett said.

So far, the program has released a cooking video and plans on having ones covering TikTok and other modern things. Bennett said they want their members to still have a sense of community within the program. They also allow members to join twenty minutes early to have pre class chats, which allows members to gain more than just knowledge.

Bennet says that Life@Elon is another way to further seniors’ connection to the university.

“There are people moving here from all of their country, and they are moving to a college town because they know some of the programming and library and athletics and all of those things a university can provide,” Bennett said. “That’s appealing to them, so this is just another thing.”