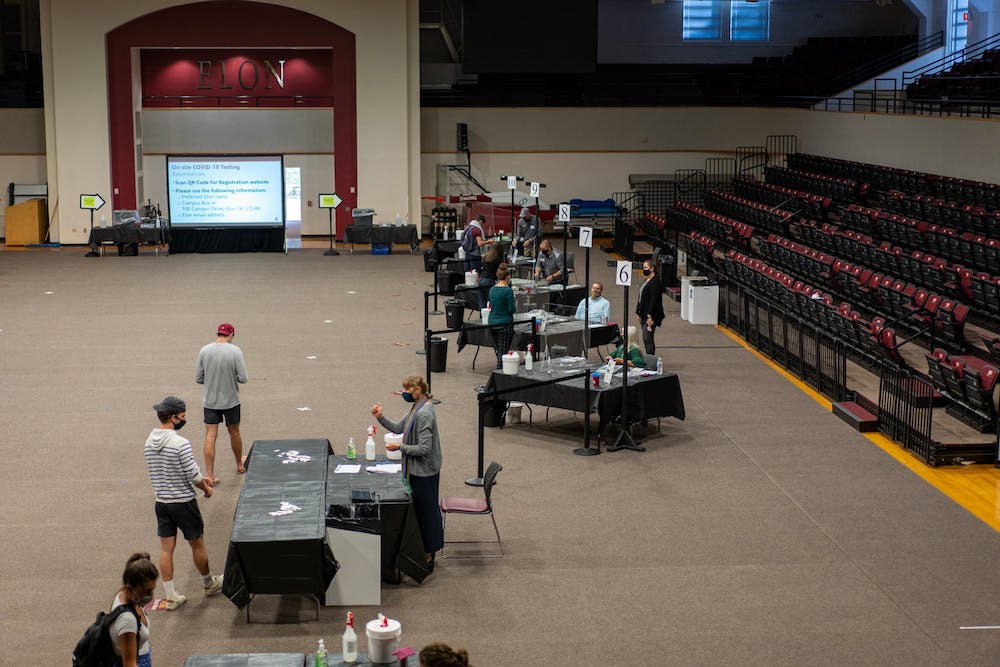 Photo by Clare Grant | Elon News Network
Elon University has started “expanded testing” for all undergraduates. They are aiming to include 5,000 students by the end of this week.

Within the past two weeks, ten clusters have been identified by the Alamance County Health Department amongst Elon University students. Clusters of COVID-19 cases have been popping up in residence halls and greek organizations across campus.

Seven fraternities and sororities and three freshman dorms all have had clusters.

152 cases have been linked to those eight clusters as of Oct. 27, according to university spokesperson Owen Covington.

The North Carolina Department of Health and Human Services defines a cluster in a non-congregate living setting — such as colleges and universities — as five symptomatic or positive cases within a 14-day period that are likely to be linked.

The seven greek organizations with clusters have been identified as having a cluster in their organization because social gatherings that members of these organizations held determined the link in cases, according to Covington. But multiple cases within an organization without an epidemiological linkage would not be considered a cluster.

“The social gatherings that were part of these students’ membership in the organization that was determined to be the linkage,” Covington wrote. “Absent that epidemiological linkage, multiple cases would not have been identified as a cluster just by virtue of the students belonging to the same organization.”

Although the health department is responsible for contact tracing and students who have tested positive are responsible for identifying close contacts which can be members of their organization. The university is also cross-referencing those who have reported positive cases and membership to organizations, according to Dan Anderson, vice president for university communications.

“We have been looking at cases and cross-referencing with membership in organizations or with residential areas so that we can see where there are patterns that show up,” Anderson said.

The spike in cases from these clusters triggered the university’s move two alert levels up on its model indicating the status of the pandemic at Elon. This isn’t the first time that clusters have triggered a change in alert levels. Three clusters among student-athletes triggered the model to move up from Level 1 to Level 3 in four days in late September.

The latest clusters and the previous ones both have all linked to social gatherings.

According to data from NCDHHS, there have been 175 clusters at colleges and universities in North Carolina since May 22 resulting in 1,959 positive cases of COVID-19 associated with those clusters. In August, the number of clusters at higher education facilities peaked with over 500 cases.