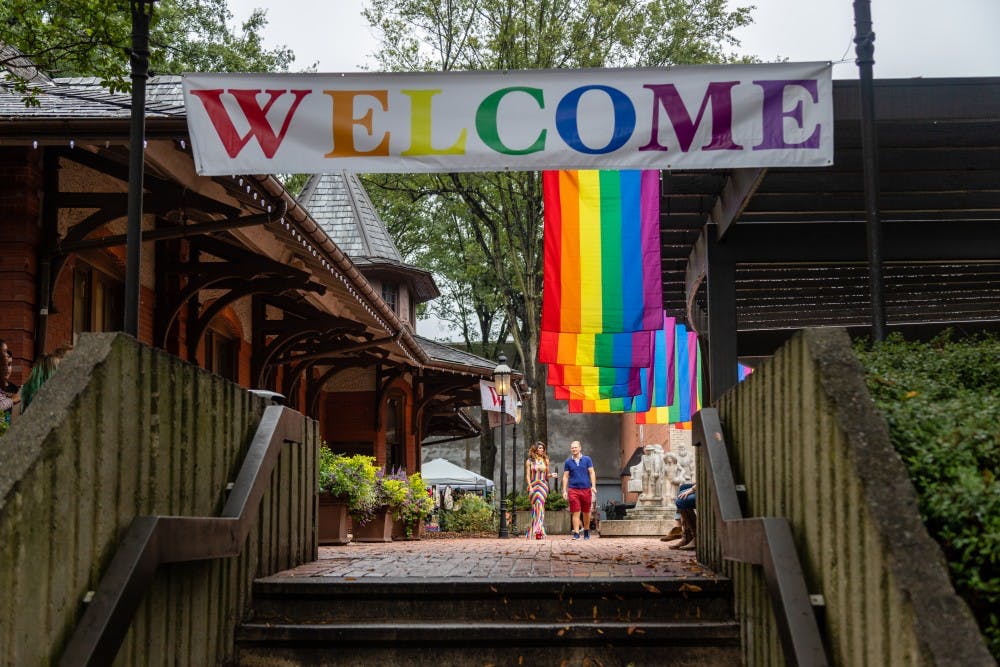 Burlington Downtown Depot was full of decorations in honor of the Alamance Pride Festival on Saturday, October 6, 2018. [Jess Rapfogel].

Every October since 2015, Alamance Pride, a nonprofit that serves the LGBTQIA community, has held an annual Pride festival in downtown Burlington. This year’s sixth annual event was held virtually due to the coronavirus pandemic, and featured performers like Stormie Daie, who is often referred to as the First Lady of Alamance Pride, Megan Doss, Kylie Coyote and Naomi Dix.

Ken Smith, president and a founding board member of Alamance Pride said Pride began when the board launched Alamance Pride’s first pride festival, which had a turnout of about 1,000 people. This year’s virtual live stream on Facebook had over 4,000 participants.

Smith said he found it interesting how many times the event had been shared and watched.

“We didn't necessarily lose any traction, and I was impressed that as many people were watching and participating,” Smith said “We weren't sure what to expect in this kind of environment, but we were really pleased.”

Elon students have been involved in Alamance Pride in years past, participating in setup the day before and helping vendors setup and break down.

Students are not the only Elon University community members involved in Alamance Pride. Lecturer of sociology Laurin Kier serves as treasurer of Alamance County Pride, and is one of the founding members of the group. While this year’s event was virtual and Kier said she “missed getting to see first-hand the delight on folks’ faces,” she hopes Pride will be back stronger next year.

“It has been an amazing experience for an LGBTQIA organization here in traditionally conservative Alamance County to be well received, but that has pretty much been our experience,” Kier said.

Smith said there are financial challenges with hosting pride in a rural community like Alamance due to the smaller population base to fund LGBTQIA services compared to larger cities like Charlotte or Greensboro.

“I think there are more opportunities to get connected with people than there have ever been. So while we may not have some ‘big city’ services, I think our community is more involved than you would have historically seen in smaller communities,” Smith said.

Both Smith and his husband work as realtors at Allen Tate in Burlington. Helping people relocate to Alamance County gave them new insights on the LGBTQIA community in the county.

“One thing I have learned is that the LGBTQIA population is much larger than I think anyone has ever realized,” Smith said. “People are not necessarily closeted the way they may have been a decade or decades ago. I think a mistake that has been made over the decades is people assume that there isn’t any LGBTQIA representation in smaller communities.”

As well as changing the format of the Alamance Pride event, the coronavirus pandemic has also had an impact on the LGBTQIA community as a whole. Smith said although different from the issues facing the LGBTQIA community in the 1980s with HIV and AIDS, those identifying as LGBTQIA are not unfamiliar with the adversity brought by pandemic.

“We are doing what we need to do to take care of ourselves and one another as best we can, so that when this is over, we can see one another and be together again,” Smith said. “But we're going to look forward to better days, because we know they will come.”