Recruitment in the age of coronavirus: A different look at Friday night lights 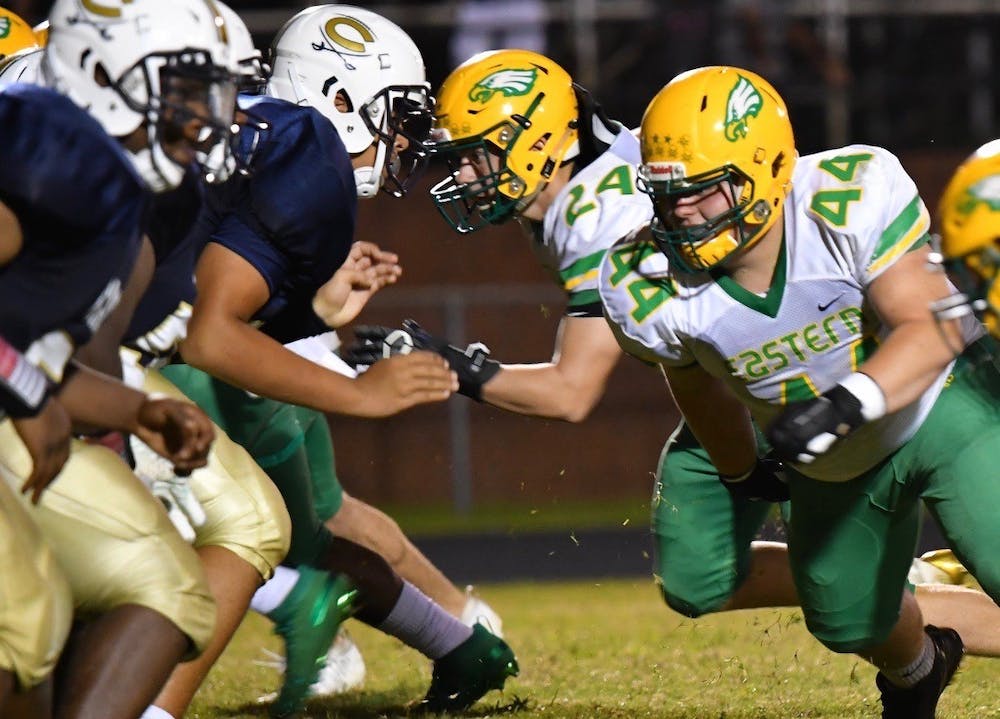 Dontae Neddham of Cummings High School holds his ground against Eastern Alamance High School. Neddham, a senior at Cummings, has had to make adjustments to his training to keep his hopes of being recruited by a college team alive. Photo courtesy of Dontae Neddham.

Prospective college athletes are faced with lots of uncertainty as they decide where they want to continue their education and football career. Division 1 athletics have instituted a recruiting freeze, and lower levels have altered the way that they are recruiting players due to the pandemic.

Jackson Stokes, a senior free safety and quarterback from Eastern Alamance High School said that he was quite uncertain about committing to a school without an in-person visit.

“It’s hard, because you can do as much online research and everything that you want. But until you actually go and visit a school and talk in person and everything, it’s really hard to know what kind of school it is and the atmosphere and everything around it,” Stokes said.

"It's hard, because you can do as much online research and everything that you want. But until you actually go and visit a school and talk in person and everything, it's really hard to know what kind of school it is and the atmosphere and everything around it."

Coult Fussell, a senior quarterback from Walter M. Williams High School, is also unsure about going to school without the experience of an in-person tour.

“Real visitors, they’re walking around, you get to see everything and then [with] virtual, it’s like, you know, they show you their highlights of campus and the city and everything like that,” Fussell said. “It’s a little bit harder to ask questions because you don’t really see stuff that you might want to ask about.”

Amid all of the uncertainty, high school football players in North Carolina will have to wait until the spring season to play while states in the surrounding area are playing in the fall. This will create some challenges in players’ routines. Tyrese Crisp, an outside linebacker and running back for Cummings High School, noted the challenges that come with an adjusted schedule.

“You know, as soon as we hit the field, it’s going to be hard because I think we have a game weeks after we have our [first] official practice,” Crisp said.

With the coronavirus pandemic, coaches have not been able to work out with their players, but they are getting creative about how they help keep their players in shape. Stokes said EAHS players participate in “Zoom workouts” with the team to help maintain their conditioning.

“We’re also participating in zooms every day, like bodyweight squats, push-ups, things like that bodyweight workout, so we can stay in shape” Stokes said.

Dontae Neddham, a senior center for Cummings High School said the coaches at Cummings, like head coach David Grimm, have requested that their players send in videos of themselves working out so coaches can keep track of the player’s progress.

“He encourages us to work out. And he asks us to send him a short video of us working out every day, so he knows we’re getting that in,” Neddham said.

College prospects around Alamance County have differing opinions about the spring season, knowing that surrounding states are playing football in the fall. Players who have not yet committed and are headed into their senior year are faced with some tough challenges about how and where they want to proceed to the next level.

“I think colleges are gonna be as fair as they can in the recruiting process, and I don’t think they’re gonna hold the fact that I haven’t had a senior season yet against me” Stokes said.

Fussell noted that he transferred to Williams High School from a smaller school to broaden his collegiate options, but that the pandemic has shifted his plans.

“Especially coming from, like, a small school, you know, I transferred here to hopefully have a decision going into this winter of where I would want to go or have options,” Fussell said, “but, you know, we got our season postponed, so it’s real tough, not having the fall season, having to wait till spring when most kids are making their decisions just for me to get my options.”

High school players have had to exercise extra discipline this year in order to stay conditioned and in top shape for the season without the supervision of their coaches.

Neddham said the break has helped him become a stronger player, and he thinks that it has made the team stronger as well.

Crisp echoed Neddham’s sentiment of personal improvement during this time.

“I’m just taking this time to get better,” he said.

High school players in the state can’t wait to get back on the gridiron, and are itching to play ball.