Elon football seniors step up for team during delayed season 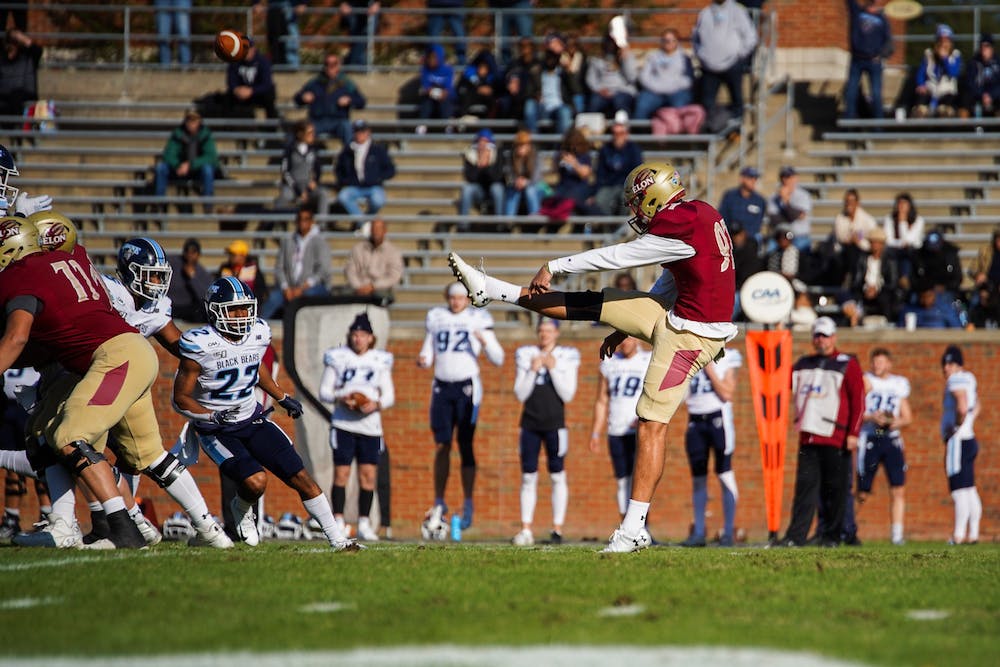 Photo by Clare Grant | Elon News Network
Elon University now redshirt senior and punter Hunter Stephenson punts the ball to the Maine Black Bears in Rhodes Stadium on Nov. 9, 2019. While Elon football is preparing for a possible spring season, Stephenson stressed the importance of staying motivated during this time to the rest of the team.

As Elon football sets its sights on a spring season after the coronavirus pandemic squashed a traditional fall campaign, head coach Tony Trisciani said that he is impressed by the leadership his veterans have displayed while preparing for the spring season.

“I’m impressed with our seniors and our senior leadership. As challenging as it’s been, those guys have really focused on what’s important, and that’s team unity, player development and healthy habits. You know, keeping COVID out of our locker room,” Trisciani said. “So really, those three things are what we’ve been focused on and our guys have really stepped up.”

“I can teach these guys that we’ve got a great team, we’ve got a great coaching staff. And it really only gets better from when you come in freshman year to when you get to my age.” Stephenson said. “So it’s all about really keeping these guys motivated and hungry and showing them that we do have the opportunity to do something special.”

"So it's all about really keeping these guys motivated and hungry and showing them that we do have the opportunity to do something special."

Redshirt senior tight end Donovan Williams is entering his first season with the Phoenix after transferring from the University of Connecticut. While Williams is new to the team, he brings four years of college football experience from his previous school. In his role as a leader, he said it is important to remain focused during this long delay.

“I think the biggest thing is just not to be too wide-eyed and have tunnel vision focused on that ultimate goal, and that is getting back on the field and just being able to play,” Williams said. “I think if you attack each day with that same mentality, keep a consistent schedule, keeping consistent work ethic and everything else takes care of itself.”

Due to the NCAA Board of Governors deciding that this season will not contribute to an athlete’s eligibility, veteran leaders like Stephenson and Williams will have the opportunity to remain with Elon for another season. Both redshirt seniors expressed an interest in pursuing a football career after college, as has senior quarterback Davis Cheek.

Cheek said that his desire is to pursue a career in the NFL after college, but his present focus still remains with the Phoenix.

“There’s a pretty good chance that I can play in the spring and then come back for the fall for [what] would be truly my final year of eligibility. So I mean, if that’s the case, that’d be awesome. And I’d love to do that,” Cheek said. “My personal goal is to play in the NFL, but at the end of the day, my personal goals don’t outweigh the team goals. So whatever works best for the team, that’s more what I try to do and that’s what I usually stick to.”

Williams noted that remaining with the team an extra season could benefit his development as well.

“Obviously, I’m gonna play in the spring and then it was a no-brainer after talking to Coach A — Coach Acitelli — and Coach Trisciani that it’d be best for me and a bunch of other guys that come back for that extra year,” Williams said. “And that’s just another year of experience, another year to play for a championship, have a successful season and then develop our individual game.”

Trisciani expressed a similar sentiment when discussing what it could mean to the individual players and team if they elect to come back for another season.

“For our guys, this is really a blessing in disguise for them to help develop their skills and get the numbers in the production that are important to be NFL players and prospects,” Trisciani said.

Moving forward, Cheek said the key to finding success for himself is to help his team succeed.

“I think that we’re building a really good team to where everyone’s taking that process very seriously. So I think that we can have team success and if we have team success, then that means personal success for everyone involved,” Cheek said. “And that’s more that’s more the way that I see it. Is not as much, ‘Hey, I want to go out and get mine.’ More, ‘Hey, I want to go out. And I want to facilitate so that way everyone on our team gets everything they want.’”