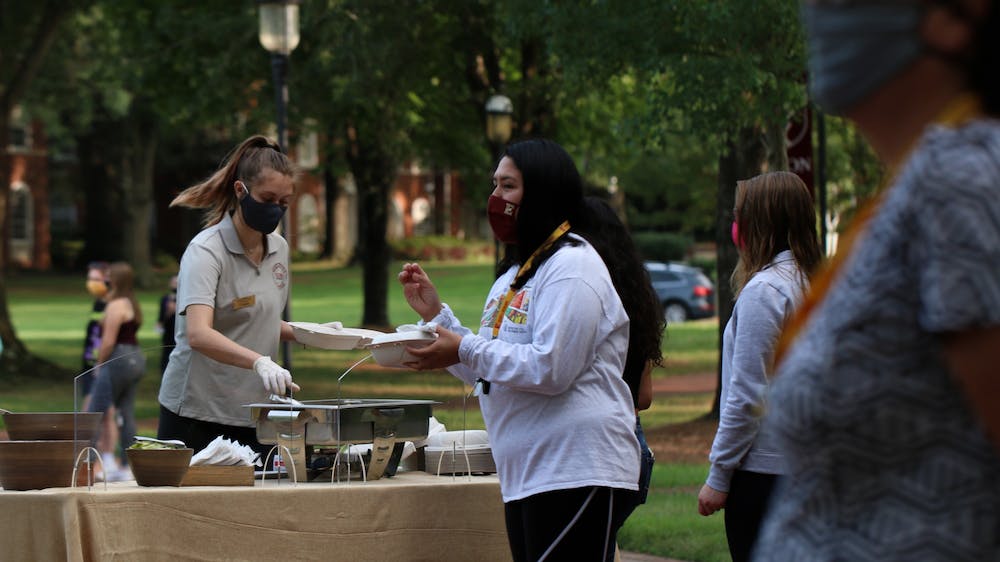 Hispanic Heritage Month is officially observed from Sept. 15 to Oct. 15, beginning on the anniversary of independence for Costa Rica, El Salvador, Guatemala, Honduras and Nicaragua. Mexico and Chile also celebrate their independence on Sept. 16 and Sept.18, respectively.

The kickoff was organized by El Centro, Elon’s Spanish language center, to advocate and celebrate Elon’s Latinx community while increasing visibility within the greater student body.

“The heritage months are great opportunities to focus on identities,” said Sylvia Muñoz, director of El Centro. “We need to celebrate that heritage all year round, but today is a great opportunity to start raising that awareness.”

For El Centro student leader Ana Eguiguren, the purpose of the kickoff was twofold.

While she hoped the greater Elon community could learn more about Hispanic culture, she also wanted Latinx students, especially freshmen, to feel a sense of belonging on Elon’s campus. Eguiguren, a senior from Quito, Ecuador, said the El Centro community was a major reason she chose Elon.

“It's a statement that we are here, and we are proud of you,” Eguiguren said. “I’m seen here, I’m valued and I have something to do here.”

And even though the coronavirus pandemic put limitations on social gatherings, Muñoz and El Centro’s student leaders worked hard to create a month of safe activities students could participate in.

“We still need to celebrate,” Muñoz said. “For those that hold minoritized identities, I think for them and the community, it would be a disservice to not share this.”

Moving inside the gym, attendees were greeted by Latin music and a display of Central and South American flags. Attendees were encouraged to social distance but still share in their appreciation of Hispanic heritage and culture.

Junior Bella Martínez began with a spoken word piece in which she recounted her journey to embrace her Latinx identity. She painted a sober picture of the discrimination faced by many Latinx Americans but encouraged the audience to be steadfast in themselves.

The kickoff closed with a game of Kahoot testing the audience on their knowledge of Latin American geography and culture. As the crowd dispersed, students were quick to voice their gratitude for El Centro and their Hispanic Heritage Month programs.

“It’s amazing to have these events,” said senior Gaby Jimenez. “It feels like family, and I feel represented on campus.”

“It makes us miss home a little less,” Figureroa said.