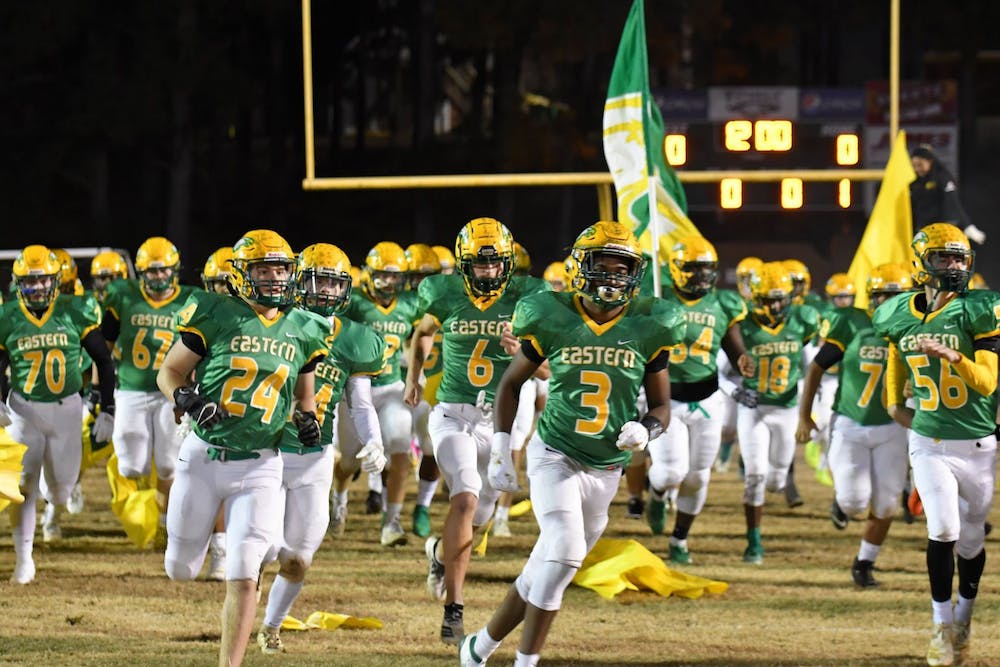 The Eastern Alamance football team runs onto the field for their game against Hunt High School. Photo courtesy of Bailey Pennington.

You know the lighting rule? Where if lightning goes off, you wait half an hour and you keep waiting till there’s no more lightning? That’s what this has all felt like.”

John Kirby, head football coach of Eastern Alamance High School, was planning on starting his preseason in mid-June. Now, like a football game delayed by lightning, the Eagles’ season is in limbo because of the continued fallout from the coronavirus pandemic.

Kirby said the start date continued to be pushed back until the North Carolina High School Athletic Association announced that preseasons would be permitted to start on Feb. 8, 2021, meaning no North Carolina high school will be playing football this fall.

This Friday, Aug. 21, would’ve been EAHS’ first game against Graham High School. Instead, all North Carolina High School Athletic Association schools are continuing to wait for the day when play can resume.

While the Eagles have not been able to work out together since the postponement of their season, Kirby said they have been able to meet virtually over Zoom. The team started off by splitting meetings based on offense and defense, then broke it down to individual players.

“It’s probably as good as it could be; it’s not ideal. You don’t have them all there all the time, I think that sometimes, I don’t know how much focus you can get through Zoom,” Kirby said.

Western Alamance High School football head coach Jeff Snuffer said he has not been holding Zoom meetings, but his team has been working out individually.

“A lot of guys are lifting on their own and staying in shape. Our quarterback has been throwing all summer,” Snuffer said about some of his players. He said he mostly talks to his captains, and leaves the leadership to them for now.

Both Snuffer and Kirby’s high schools have transitioned to distance learning. Snuffer said WAHS has been told by their administration that they will be online for the first nine weeks of instruction, at which point the school will determine how to continue.

With the coronavirus pandemic shutting down colleges across the country, high school athletes have had in-person interactions with college coaches limited, if not completely cut off. Kirby and Snuffer both have athletes who are trying to go through the college recruiting process. Kirby said the situation will hurt the players on the verge of being recruited more than the “shoe-in” players with multiple offers.

“Division 1 guys, they’re recognized a lot of times by these different social outlets, like 247 and Rivals and different websites — that’s their job to find these guys. They promote them, they rank them. Those guys have already been seen; they’ve already been identified,” Kirby said. “The guys who are maybe on the bubble, I think that this is gonna hurt.”

EAHS’s schedule is similar to a college schedule, meaning that it runs on a “four block schedule” where students take four classes every day. Students have to reach a certain amount of credits in order to graduate, which means that some students have the ability to graduate high school early.

Snuffer said that normally, college coaches would be visiting his high school and high schools around the area year-round. He said if a coach was interested in a player, the college recruiter would receive that player’s transcript and then look at their highlight reels. The next step would be an invite to a combine in the summer in order for coaches to take a closer look at the players. Because of the coronavirus pandemic, college coaches have not been able to see players in person, and players have not been able to visit colleges.

“Right now, my quarterback has like nine offers. I think I might’ve had a few more guys that might have had a few more if they’d had a chance to work out this summer with some college prospects,” Snuffer said.

Snuffer said that although an abnormal situation, it’s one that everyone is in together. His team motto has always been to have a positive outlook, something he said isn’t changing anytime soon. He said a good mindset is more important than it has ever been.

“I’ve been telling our guys, ‘look, we don’t know when we’re going to play, when we’re going to be able to get together and do meetings or practices. Just prepare, have a positive response, be strong, be mentally tough, and take care of yourself,’” Snuffer said. “There’s so many questions you don’t know. We were ready to practice and it’s postponed. We think we’re gonna have a season and then they push it back. There’s been so many questions that I just can’t answer.”