In a press conference today, Cooper announced that North Carolina will remain in “Safer at Home” Phase 2 as a way to monitor the spread of COVID-19 as some students return back to school this fall 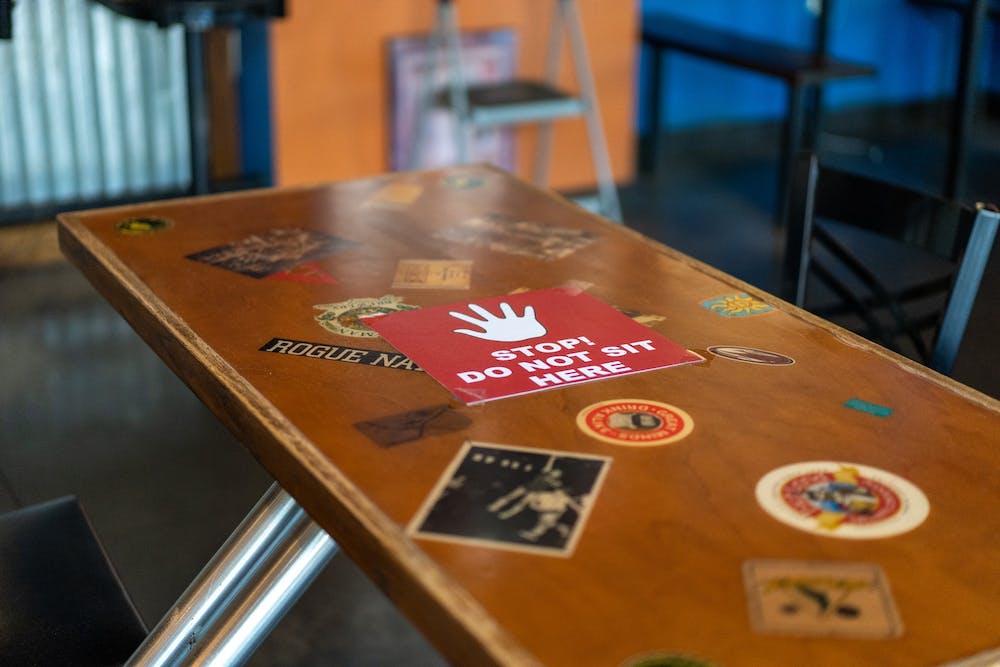 Photo by Clare Grant | Elon News Network
Signs have been paced on the tables to create distance between those dining in Pandora's Pies in Downtown Elon on July 2, 2020

North Carolina will remain in Phase 2 for another five weeks, Gov. Roy Cooper said in a press conference today.

“In keeping with our dimmer switch approach with schools opening, and in order to push for decreasing numbers which will keep people healthier and boost our economy, North Carolina will remain paused in Safer At Home Phase 2 for five weeks,” Cooper said.

Phase 2 guidelines include restaurants opened at reduced capacity, restricting gatherings to 10 people indoors and 25 outdoors, as well as continuing to keep bars and nightclubs closed, according to the North Carolina Department of Health and Human Services.

“We want to be able to have a good line of sight after those openings to make sure that we understand which way are our trends heading,” Cohen said.

The majority of schools are opening either in Plan B, which allows for hybrid instruction, or the fully remote Plan C, meaning that many K-12 students will be returning to a form of in-person instruction this fall, as many university students also return to the state for classes.

Recently, the Alamance Burlington School System switched from opening under Plan B to Plan C, offering remote learning for at least the first nine weeks of the school year.

The NCDHHS will continue monitoring trends based on four metrics: cases with COVID-like symptoms, lab-confirmed cases, positive tests as a percentage of total tests, and hospitalizations, Cohen said.

Cumulatively, there have been 129,288 lab-confirmed cases and 2,050 deaths in North Carolina, according to NCDHHS. Alamance County has reported 2,298 cumulative cases as of Aug. 5 and has had 41 deaths to date.

According to the data, North Carolina is seeing stabilization in case counts and the percentage of positive tests out of total tests is around 7-8%, but the goal is to decrease that percentage to around 5% or less, Cohen said. Hospitalizations have also started to level off, according to Cohen.

Despite this, the number of cases remains high.

“Stable is good, but decreasing is better,” Cooper said. “While we are seeing stabilization of our numbers, that doesn’t mean we can let up. We know this stability is fragile.”

Testing turnaround times have also improved, with most North Carolina labs giving back results in 3-4 days, according to Cohen; however, she said that the number of tests being taken has decreased over the past week.