The scenes of hundreds of students packing into residence halls like previous years was missing, as students this year move in over a two-day period in smaller groupings than before 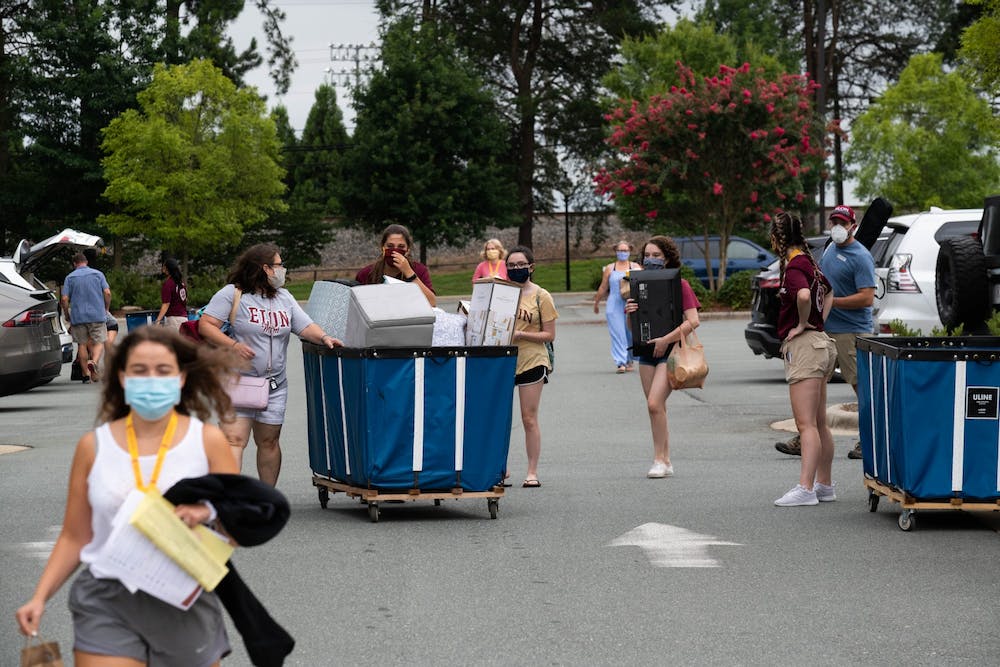 Photo by Thomas Denome | Elon News Network
Freshmen move into East Neighborhood with the help of orientation leaders and other Elon students on August 14, 2020.

Students and families were sparse in the Danieley and Colonnades neighborhoods for this year’s move-in compared to the hustle and bustle of past years. Students are arriving over a two-day period in much smaller batches than previously.

Senior Lauryn Harper, who has been an orientation leader for three years in a row, said the biggest difference for her this year was the pace.

“Last year was very hectic,” Harper said outside of the Danieley flats. “This year is a little bit different because of COVID, a lot of students aren’t really coming in and the pace is a lot slower.”

Harper had some concerns about being an OL this year because of her asthma, meaning she has to be more careful when interacting with others. She also wasn’t sure how everything would work in practice.

“I wasn’t sure how logistically it was going to play out and how safe we were really going to be,” Harper said. “I was definitely very nervous coming into orientation, but they’ve done a good job so far.”

Robby Maguire, a new transfer student to Elon University, said he was surprised at how helpful everyone was during his move.

“It was super easy, nice and streamlined. I liked how everyone was so hands-on in terms of just telling you where to go,” Maguire said. “They went above and beyond of what I expected.”

In Colonnades Neighborhood, freshman Tristan Corcoran moved in with help from his brother and parents. Like Maguire, Corcoran said the move went smoothly.

Despite the pandemic, Corcoran is looking forward to coming back to class after losing much of his senior year of high school this past spring.