Standing in solidarity: what it means to be an ally 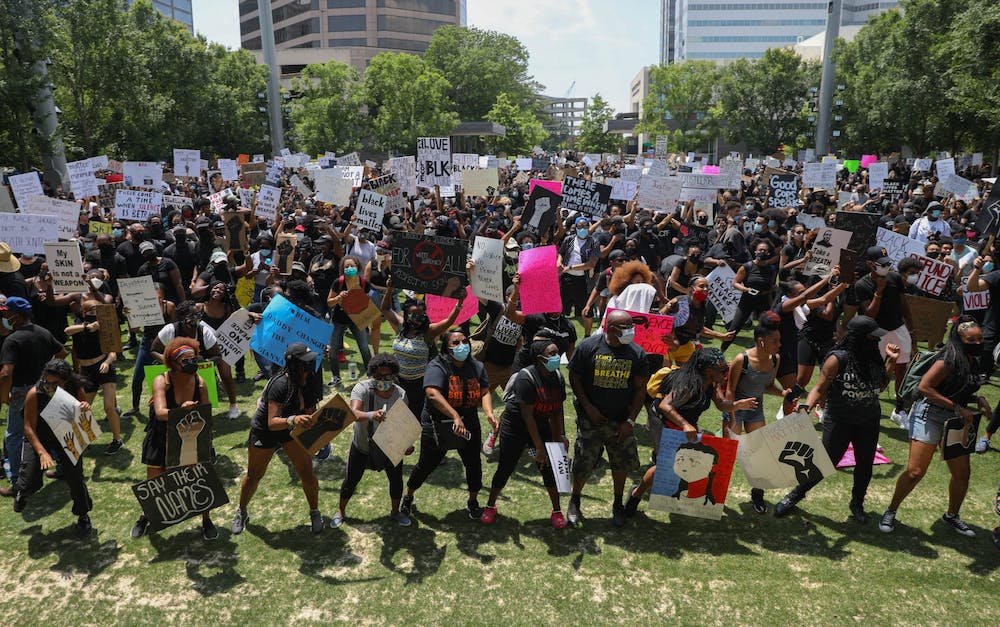 
Hundreds of demonstrators dance in LaBauer Park before the start of the anti-policy brutality protest organized by “Greensboro Rising” in Greensboro, North Carolina on Sunday, June 7, 2020. There were approximately 5,000 people at the park, according to on-site officials from Greensboro Downtown Parks Inc.

Being an ally begins by recognizing that there is an issue of racism, according to Damion Blake, assistant professor of political science and faculty fellow for race, ethnicity and diversity.

Blake is just one of many voices contributing thoughts to the idea of white allyship and standing in solidarity. As protests against police brutality and systemic racism in America continue after the police killings of George Floyd, Breonna Taylor and others, the idea of being an effective ally to the black community and using white privilege to support voices of color is once again entering conversations surrounding racial injustice.

Blake, a black professor at Elon, said people need to come to terms with the history of systemic racism in America once they recognize there is an issue. Understanding the political, social and economic racism against black communities is essential to create change, according to him.

“The country has made some progress, but its politics, economy and social sectors — housing, health care and educational sectors — still have this bias and prejudice against blacks and browns,” Blake said. “America's democracy started off on an inegalitarian basis, and unfortunately, that value and practice is still happening in several areas- law enforcement and the justice system, in education, healthcare and the economy.”

Stephanie Baker, assistant professor of public health studies, believes there isn’t just one answer to being an effective ally. She also said she prefers a term “more along the lines of co-conspirator,” rather than ally.

“Allies come and go when it’s convenient and are typically motivated to do the work because of the impact racism has on ‘those poor people,’” Baker said. “Co-conspirators see their place in the work and recognize that their liberation and freedom is tied to the fight against racism as well.”

According to Baker, there are different organizations that people can get involved in on the ground to help as well.

“There’s the Alamance Racial Equity Alliance and the Saxapahaw Social Justice Exchange in the broader community — in addition to Equity Committees for ABSS, I’m a part of the Alamance County Health Equity Collective,” Baker said. “At Elon, there is the CREDE and AAASE, which are really the foundational spaces for this work on campus.”

The Racial Equity Institute in Greensboro and the Durham Organizing Against Racism committee are also resources that are available, offering workshops to help people understand racism, Baker said.

At a recent discussion panel for student-athletes on racial injustice, Randy Williams, associate vice president for inclusive excellence and civic engagement, said he believes education on the broader issue of racism is important for those looking to be better allies.

“In order to be an ally, you have to understand what the issue is,” Williams said. “The core of what you would want these allies or potential allies to do is to check oneself, some self-evaluation, be much, much more conscious of spaces, and then educate oneself.”

Williams emphasized the need for white students and people to educate themselves on the history of racial oppression as a way to better understand the issues and experiences of black classmates and colleagues. According to him, those looking to be better allies need to understand how oppression developed.

“[Race] was not a tool or something developed to actually start and oppress people, but it was actually developed to advantage white people,” Williams said. “It was never intended to oppress anybody, but in the process of advantaging any one thing, any effect, you're going to oppress something else or someone else.”

For Charlotte Smith, the head coach of Elon’s women’s basketball team, people need to start becoming okay with being uncomfortable.

“Get comfortable with being uncomfortable,” Smith said during the same panel. After the protests broke out, Smith said one of her white friends called her asking her to help her “to understand the black experience.”

“We walked in my neighborhood for probably about an hour and a half, just talking about the black experience and just opening her mind and enlightening her to different things that she didn’t understand and didn’t know,” Smith said. “So get comfortable with being uncomfortable and ask questions to a black friend.”

“I think we often forget that being an ally is not really about the ally,” Payne said. “It must begin with listening to leaders in this community and educating yourself on the history of discrimination and resiliency of this community.”

For Payne, having people do their own research on racism is important as well.

“Stop just asking marginalized communities how to be an ally, how to create change, how not to be racist, et cetera,” Payne said. “There is academic literature out there and so much knowledge online. I would encourage you to do some research and work on your own before bombarding your Black friends in this time.”

Besides education, donating to organizations and sharing the thoughts of black leaders online are other ways to help lift up voices of color according to Payne.

“Everyone can do something,” Payne said. “From signing petitions, calling state legislators, creating helpful infographics, protesting, speaking to folks from your community to try and educate them, there is so much we can all do.”