With live productions stopped, the performing arts department has begun to broadcast plays on Facebook Live 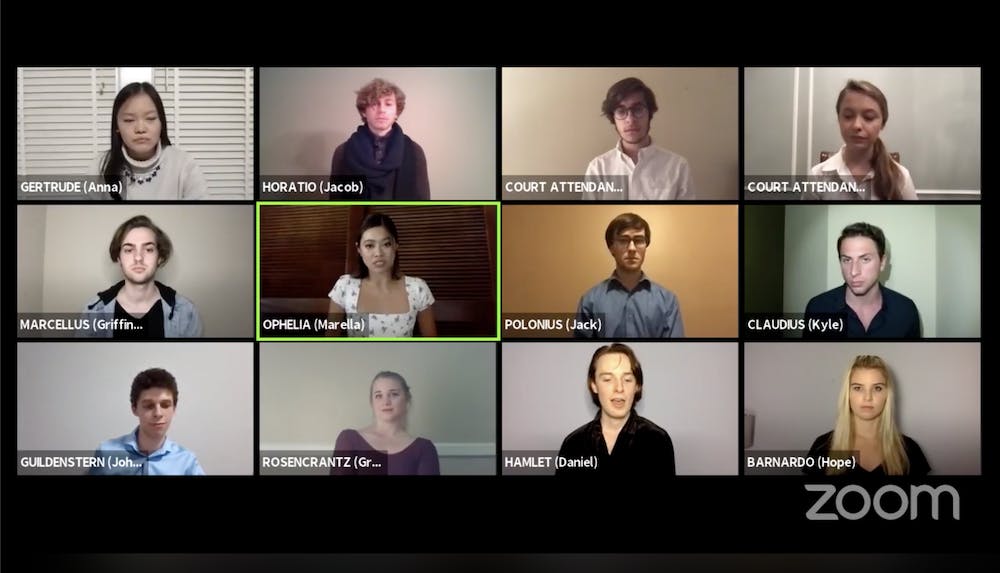 When most people think of a play, they see actors set on a stage in elaborate costumes, meticulously painted sets and red curtains being drawn between acts. Shakespeare performances are no different, requiring actors to memorize lengthy monologues or learn intricate combat choreography to present to a captive audience.

For senior and acting major Daniel Skinner, who was cast as the lead of “Hamlet”, the dream of putting on a full-scale production quickly came to a close. He said where some people freeze up at the thought of looking out onto an audience, the feeling of stepping onto a stage gives him a sense of fulfillment.

“You’re deeply in the moment and in some ways, whoever is on stage with you are the only people in the world,” Skinner said. “You’re still you underneath the costume and make-up, but everyone in the room has agreed to see what happens if that wasn’t true. I love it.”

Although the department was unable to put on a live show with sets and costumes, they continued to bring Shakespeare’s words to an audience, albeit unconventionally — through a Facebook live broadcast.

Elon Performing Arts livestreamed a reading of “Hamlet” at 7:30 p.m. on Saturday, April 4, despite cancelations of the spring semester’s live plays due to the coronavirus.

Skinner said there were new challenges in performing virtually — but that didn’t stop anyone from giving a full performance.

“We lost that sense of connection with the audience,” Skinner said. “Because the stakes were so high to give a quality, one-time performance, everyone gave it their all and supported each other all the way through."

Acting opposite of Skinner was Marella Sabio, another senior and a music theater as well as arts administration major. Although she understood the need to cancel the shows, it still came as a disappointment.

“My parents were coming to Elon to see a mainstage production for the first time and it was the first play they would see me perform as well,” Sabio said.

Performing from her home in California brought other challenges, including having to duck under her desk during dress rehearsal because of a few earthquakes. Despite having to perform virtually, she said Shakespeare’s words are enough to entertain.

“It's also interesting stripping away the movement and blocking from the piece and letting the words do all the work,” Sabio said. “It was an incredible experience to be a part of.”

"This virtual performance not only gave us some closure on letting the show go but also gave people stuck at home some alternative entertainment."

For senior Kyle Brincks, another acting major cast as the role of the villain, Claudius, the feelings were similar. Although he was hesitant that the play might not translate well over a screen, in the end he thought it was all worth it.

“I think a lot of us weren't ready to just let all that hard work go because we were fully staged and ready to go into technical rehearsals,” Brincks said. “This virtual performance not only gave us some closure on letting the show go but also gave people stuck at home some alternative entertainment.”

In any theater production, lighting and design are just as important as the acting. Senior and theatrical design major Tamir Eplan-Frankel was unable to see his technical elements come to life on the McCrary stage.

“I was very excited for my last show to be Hamlet, as this would be the first time I would get to design lighting in our largest performance space,” Eplan-Frankel said.

One of the most emotional moments for him was having to take down his show posters from his dorm when he moved out. He has 34 posters, representing each Elon production he has worked on over the years.

“Each of those posters represented upwards of eighty hours of my time each, some of them hundreds of hours,” Eplan-Frankel said. “Elon performing arts has been the most important part of my Elon career.”

Elon’s performing arts department also canceled "Grand Night" and “Violet” — as well as all student-directed and class productions — because of the coronavirus. For people like Skinner, this meant forgoing the hours already spent preparing for a live production.

According to Skinner, rehearsals for Hamlet started on Feb. 3, going for five days a week and over three hours a night. He said the cast spent about 105 hours in total working on Hamlet in total.

Freshman Zion Middleton was cast as Fortinbras and Reynaldo in Hamlet and in a few numbers for Grand Night — an annual showcase for the musical theater department. He said his first thought after hearing about the canceled performances was about the seniors.

“Many of the seniors were so passionate about the shows and they were playing their dream roles,” Middleton said. “Although this has been extremely impactful on my life as a performing arts major, I can’t help but feel extremely sympathetic for all the seniors who won’t get to have their final performance at Elon.”

Middleton said despite the disappointment, he was glad he got to be a part of the productions this year.

“It was truly a blessing that I was cast in Hamlet and some Grand Night numbers. The directors took a chance on me and my talents, and I could not be more grateful,” Middleton said. “Even though the shows are canceled, I know that I got better and I grew as an artist because of it.”

Skinner and Middleton said members of the performing arts department have been continuing to support each other during these difficult times.

“We are sharing our personal art with each other on social media and staying in touch,” Skinner said. “We’re encouraging each other to keep creating more than anything, since no amount of social distancing can ever stop that.”

Skinner said he was not surprised at the initial announcement of the cancelations, but still feels a sense of grief that the community will not get to experience the play how it was planned.

“Everyone has poured their hearts into these shows, and it’s terrible that the public won’t be able to see how incredible each of these productions were,” Skinner said. "I wasn’t shocked when I heard, given the CDC’s recommendations, but it’s phenomenally sad.”

Despite this, Skinner is glad they were able to still put on some kind of performance.

“As an Elon show, it was sad that it wasn’t realized in the way we wanted, but I think it became more than an Elon show,” Skinner said. “It became something much larger than all of us.”