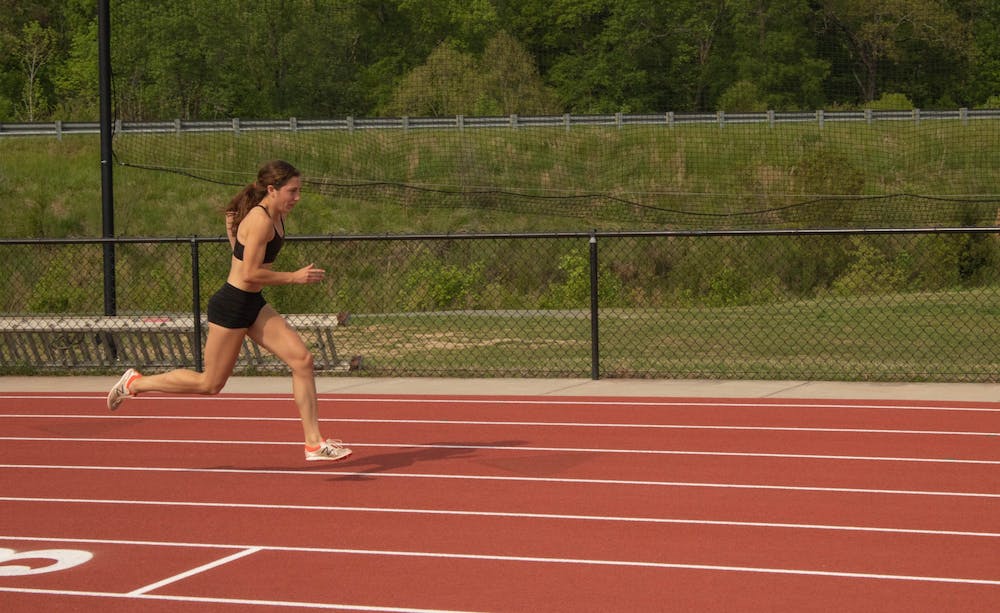 The women’s track and field seniors are chasing the glory of winning a championship after coming close the past three years.

The freshmen and sophomores are looking to follow in the footsteps of the upperclassmen with the goal of getting to the championship. With all of the cross country runners on track this spring, they look to bring Elon its second conference championship in the same year.

Director of Track & Field and Cross Country Mark Elliston said the team’s success hinges on each player’s ability to be there for one another.

"They push each other [and] encourage each other, That's really what it takes to be a team that can go in and do something worthwhile."

Director of Track and Field and Cross Country

“They push each other [and] encourage each other,” Elliston said. “That’s really what it takes to be a team that can go in and do something worthwhile.”

Senior Skylar Barthelmes said winning a conference championship would be a great testament to the team’s hard work.

The team features a number of returning accomplished athletes. In 2019, senior Melissa Anastasakis earned All-Colonial Athletic Association honors for the fourth straight season after finishing third at the CAA championships. Anastasakis ran a personal record time of 21:05.98 in the 6k at the Eastern Carolina University Pirate Invitational. Anastasakis was also the runner up at the James Madison University Invitational with a time of 21:39.0 in the 6k. At the NCAA Southeast regional championship, Anastasakis finished 49th overall.

As a senior player, Anastasakis is excited for underclassmen players to further develop as effective players, speaking to her role as a mentor on the team

“I’ve definitely progressed throughout my time here every year consistently, you know, improving my own personal marks,” Anastasakis said. “I hope that’s something that the incomers and my younger teammates kind of, you know, look up to and hopefully aspire to follow.”

Barthelmes in 2019 set a new school record in the weight throw with a mark of 55’ 8.25” (16.97m) at the Darius Dixon Memorial Invitation. Barthelmes placed second in the weight throw with a toss of 54’ 4” (16.56m) at the JDL College Team Challenge. Barthelmes finished fourth overall in the shot put with a throw of 42’ 3.25” (12.88m) at the JDL DMR Invitational. At the end of the season, Barthelmes’ record-breaking season earned her All-CAA in throws and in the javelin.

According to Barthelmes, her biggest personal goal for the season is to qualify for regionals.

Elon sophomore Jordan Haywood is in the top three for women’s outdoor 100-meter dash. Sitting in the third spot with a time of 12.06, Haywood sits behind Simone Jackson and Sydney Griffin who both ran in the 2016 season.

Teammate and sophomore Alex Tudor sits at the 6th spot for the fastest time for women’s outdoor for the 100- meter dash, with a time of 12:33.

“It’s always great too, you know, seeing teammates thriving, especially like the freshman group that we have. It’s been really strong. So just to see them continuously improving and like, meeting their goals and exceeding them. That’s always great,” Anastasakis said.

During the outdoor season, O’Malley continued her success. O’Malley was named 2019 All CAA for high jump and 4x100 meter relay team.

Younger players on the team speak to the mentorship from veteran athletes as being something that pushes them to improve.

“As a freshman, having that leader to look up to kind of help me a whole lot and feel like I had confidence and that people above me really felt like they cared about what I was doing. So I feel like being a leader is really important,” Barthelmes said.

Ahm came in and instantly set running records, earning recognition all throughout the season. She placed 11th overall at the CAA championship and earned All-CAA honors as a freshman athlete. To end her season on a high note, Ahm was named the 2019 CAA Women’s Rookie of the Year.

“It really catches on and inspires the others when they see their teammates not only get it done and working hard in practice, in the weight room, at home runs wherever they are on the track,” Elliston said. “It really does inspire them to step up their game, and to challenge them on the inside to say, ‘Am I doing everything I can?’”

The Elon track and field team will wrap up their indoor season in Albuquerque, New Mexico on March 13-14 for the NCAA Indoor Championships. The first outdoor meet of the 2020 season will be on March 19-21 at UNC Charlotte for the Charlotte Classic.