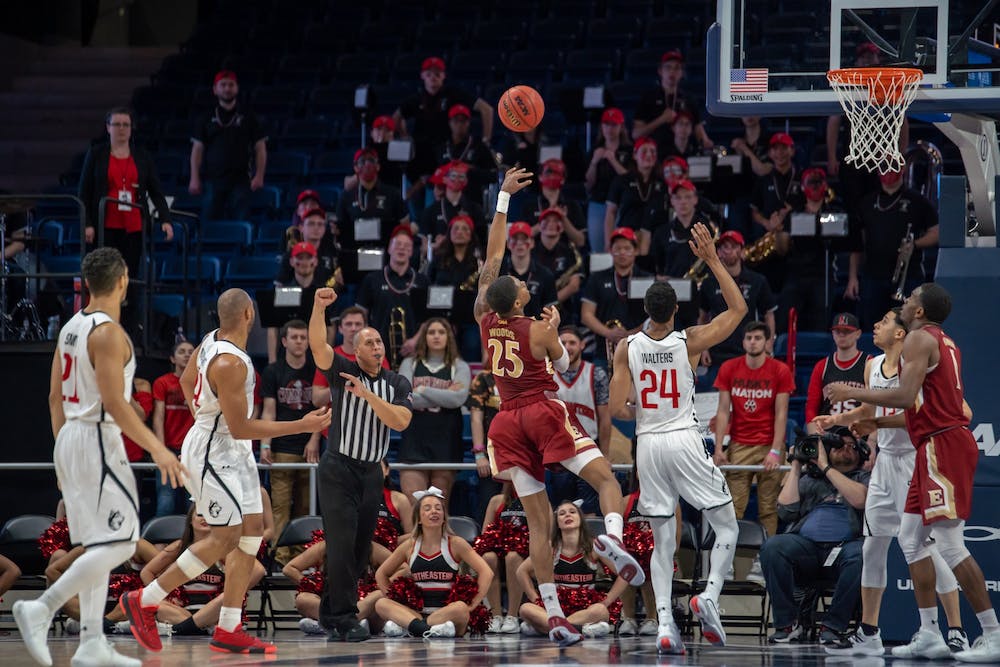 
Elon University freshman and forward Hunter Woods shoots the ball during the semifinal game of the CAA Tournament where the Phoenix lost to the Huskies 68-60 in the Entertainment and Sports Arena in Washington D.C. on Monday, March 9.

The final game of coach Mike Schrage’s first season with the Phoenix saw the team start slow after back-to-back emotional wins in the conference tournament. The Phoenix showed flashes down the stretch, but 20-point efforts by graduate guard Marcus Sheffield II and freshman guard Hunter McIntosh couldn’t overcome the Huskies.

“We finished the season the right way,” Schrage said. “We challenged our guys after our two last regular-season games to finish the right way, and we did, and I couldn't be more proud of this group.”

The Elon offense struggled to find any sort of footing early in the game and was quickly down 9-0. The first score for the Phoenix would come with 14:03 left in the first half thanks to a layup from McIntosh.

Northeastern would enter halftime with a commanding 37-21 lead.

The Phoenix struggled with hanging onto the ball early in Monday’s contest, committing 10 turnovers in the first half. The team averaged just under 12 turnovers per game in the regular season. Elon was unable to reverse its luck early in the second half. Northeastern continued to keep the game at arms-length, leading 45-28 with 15:28 left in the game.

Sheffield II struggled early in the game, but began to heat up in the second half. Sheffield would finish the night with 20 points and three 3-pointers in the final game of his collegiate career.

Later in the game, the Phoenix offense began to find a rhythm, and cut the deficit to 52-42 with 7:10 left in the game. However, the Phoenix were unable to overcome an impressive 3-point performance from the Huskies. Northeastern would finish the night shooting 52% from beyond the arc.

After the game, the 2019-2020 men’s basketball squad stood before the Elon fans for the final time before heading back to the locker room. Schrage said that this team’s resiliency is the legacy they will leave. The went from having a 12-20 regular season to making the program's first-ever semi-final appearance.

“This Team 107 is forever going to be reflected back as building the foundation and it's a launching pad,” Schrage said. “We believe in elevating this program to amazing heights.”