Wire-to-wire win put the Phoenix in the record books 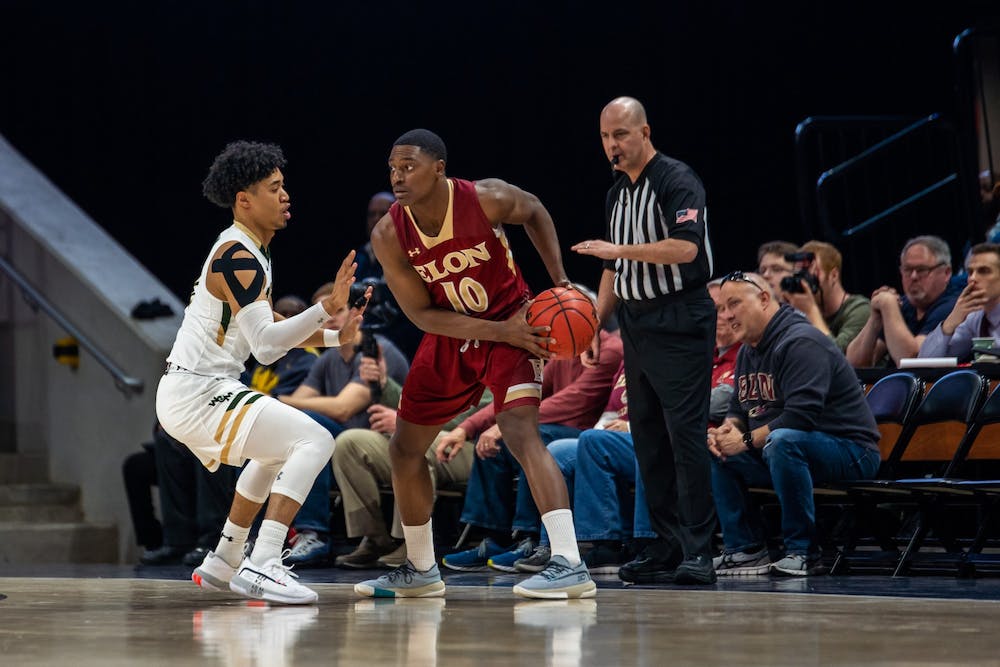 Photo by Clare Grant | Elon News Network
Elon Univeristy sophomore and guard Kris Wooten keeps the ball away from William and Mary defender during their quarter final game in the Entertainment and Sports Arena in Washington D.C. during the CAA Tournament on Sunday March, 8. The Phoenix beat the Griffin 68-63 and advance to the semifinals for the first time in Elon history.

WASHINGTON, D.C. — After a comeback victory Saturday night, Elon men’s basketball faced off against The College of William & Mary in the Colonial Athletic Association Championship quarterfinals on Sunday. The Phoenix pulled off the upset victory against the Tribe by a final score of 68-63, and advance to the CAA semifinals for the first time in the program’s history.

Unlike the first game of the tournament, the Phoenix offense came out firing. With 16:35 left in the first half, Elon held a 13-2 lead over the Tribe.

“The first two times we played them we tried to do something different than what we usually do,” Elon head coach Mike Schrage said. “For the most part we got back to doing what we do, and I thought for the most part the guys embraced it.”

William & Mary would eventually creep back into the game. With 8:49 left in the first half, the Tribe cut the Phoenix lead to 23-20. However, Elon was able to pull away once more and head to the locker room at halftime with a 40-31 lead.

The second half was a back-and-forth effort for the Phoenix. With 7:48 left in the game, William & Mary cut the Elon lead to 56-54. The Tribe would keep the game close towards the end, but was unable to claim the lead at any point in the game.

The Elon offense was hot from beyond the arc throughout the game, draining 13 three-pointers as a team.

Elon also got a boost from freshman forward Hunter Woods, who continued his production from the previous night. Woods has played every minute of the tournament so far and finished Sunday’s game with 20 points and 15 rebounds.

Woods credits his teammates for his success on the court.

“I just give credits to my teammates for making big-time plays,” Woods said. “We never got rattled, we kept our poise throughout the whole game. Big-time players make big-time plays.”

Schrage also expressed how much trust he has in the freshman forward.

“I trust him. I’ve always trusted him, but it grows over the course of the season,” Schrage said.

Elon will be playing in the CAA championship semifinals for the first time, and freshman guard Hunter McIntosh said that despite the ups and downs of the season, the team has remained positive.

“We took a lot of bumps and lumps early on in the season, but we just had the right attitude,” McIntosh said. “We have a belief in ourselves, belief in our work, so I think some of it is starting to come to fruition.”

Elon will continue its journey in the CAA Tournament Monday night against sixth-seeded Northeastern University. Tipoff for the semifinals is scheduled for 8:30 p.m.