Men's basketball leaves a building block for the future 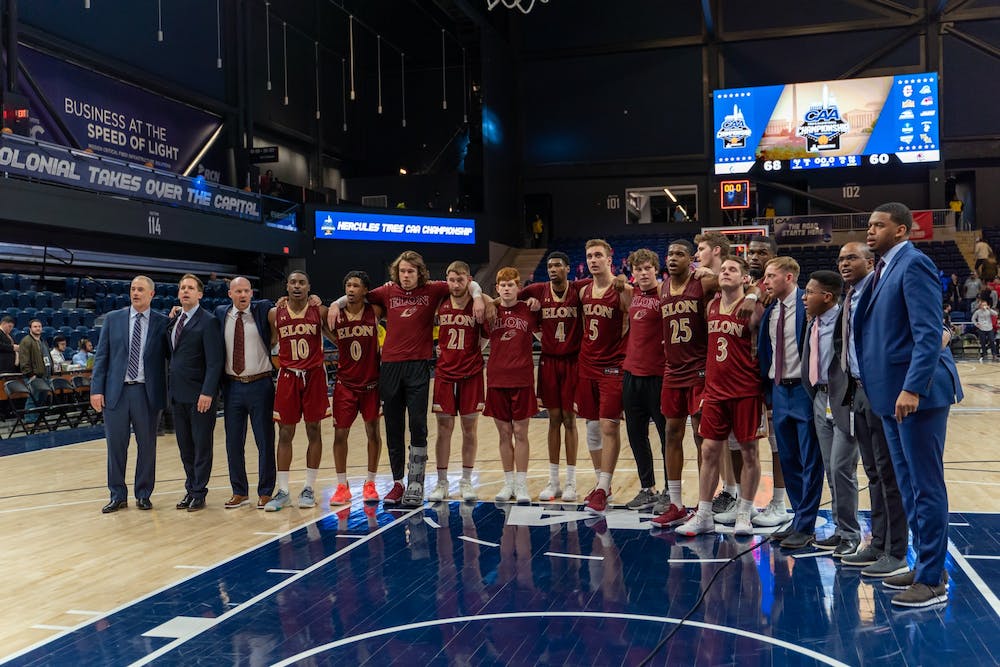 Photo by Clare Grant | Elon News Network
Elon University Men's Basketball Team comes together to listen to the Elon University Fight Song one last time in the 2019-2020 basketball season in the Entertainment and Sports Arena in Washington D.C. on Tuesday, March 10. The Phoenix made it to the semifinals for the first time in Elon history where they played the Northeastern Huskies and lost 68-60.

Momentum tends to carry, and Elon University’s men’s basketball team was no exception with its historic performance in the Colonial Athletic Association championship tournament.

When graduate guard/forward Marcus Sheffield II sank a jump shot with three seconds left against James Madison University, the Phoenix secured its first victory in the CAA tournament since 2015. The seventh-ranked Phoenix advanced to the CAA semifinals for the first time ever after another upset victory over the No. 2 ranked The College of William & Mary.

On day three of the tournament, Elon’s championship run came to an end with a 68-60 loss against Northeastern University in the semifinals. Elon head coach Mike Schrage said the Phoenix showed resilience against the Huskies, but the team wishes it could have pushed deeper into the postseason.

“We wanted to keep playing. We wanted to keep being together, despite the adversity we faced back in November, December, some in January,” Schrage said. “A lot of teams get sick of each other. It’s a long season, and didn’t sense this one bit from these guys. … They kept believing, kept staying together.”

Elon did not get off to the best start in the 2019-20 season. Following a loss to Towson University at home halfway through conference play, the Phoenix fell to a dismal 5-16 record on the season.

However, Elon started to find its footing in the final 10 games of the regular season, going 6-4 during that stretch. After the team’s victory against William & Mary, freshman guard Hunter McIntosh said the team has worked through growing pains, but a positive mindset led to the team’s success early in the tournament.

“We took a lot of bumps and lumps early on in the season, but we just had the right attitude,” McIntosh said. “We have a belief in ourselves, belief in our work, so I think some of it is starting to come to fruition.”

Moving forward from Schrage’s first season as head coach, strong performances from young players in the 2020 tournament may bode well for the future of the men’s basketball program.

By the time Elon’s journey in the tournament came to a close, sophomore forward Federico Poser racked up 35 points, hauled in nine rebounds and shot an impressive 70% from the field.

"We took a lot of bumps and lumps early on in the season, but we just had the right attitude, We have a belief in ourselves, belief in our work, so I think some of it is starting to come to fruition."

Freshman forward Hunter Woods showed his stamina and defensive prowess in the CAA championship. Woods subbed out of the game once in the tournament, exiting the game for just 97 seconds in the loss against Northeastern. In the upset victory against William & Mary, Woods collected 15 of his 34 total rebounds in the tournament.

Finally, CAA Rookie of the Year Hunter McIntosh was a major contributor for the Phoenix on day three of the tournament. Against Northeastern, McIntosh scored 20 points and drained four 3-pointers.

Following Elon’s loss to Northeastern, Schrage sat down for the postgame press conference with two departing members of the Phoenix at his side: redshirt junior guard Seth Fuller and Sheffield II.

Schrage talked about the relationship he formed with the duo and the example that Fuller and Sheffield have set for Elon athletes in the future.

“Seth, to have the fortune to coach him and be a part of our program this year. He’s the perfect example of what I want an Elon student athlete to be going forward,” Schrage said. “And then Marcus Sheffield, ... a man that I’ve known now for seven years. And just really lucky that he decided to be a part of this journey and both these guys will be forever remembered.”

Fuller believes the future of the men’s basketball program is bright and in good hands with the current coaching staff.

"This Team 107 is forever going to be reflected back as building the foundation, and it's a launching pad."

Sheffield II started every game in the 2019-20 season and averaged over 18 points and five rebounds per game.

After the final game of his collegiate career, Sheffield II, a transfer student from Stanford University, reflected on his lone season with Elon.

“Coming in, I didn’t really know what to expect being injured,” Sheffield II said. “I was able to bond with the team really well. Those guys definitely became like my brothers. I love them for sure.”

With the first chapter of the Schrage era coming to a close, the first year head coach said this team will serve as an example for future squads.

“This Team 107 is forever going to be reflected back as building the foundation, and it’s a launching pad. We believe in elevating this program to amazing heights,” Schrage said. “We’re an amazing school, amazing new arena, amazing support. So we’re looking forward. This was a great, great start.”