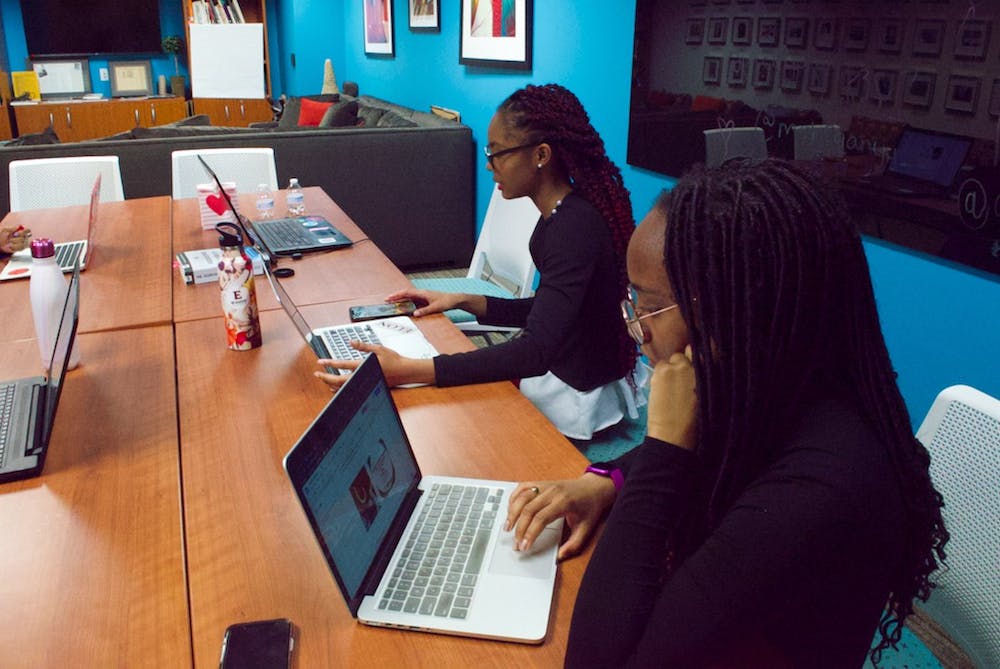 Photo by Anaya Jones | Elon News Network
Left to right: Eukela Little and Alicia Clanton are in charge of launching the BlackbELONg Magazine work together on the publication.

In November 2019, sophomore Anaya Jones said she came up with the idea for BlackbELONg Magazine, a publication she said she hoped would open doors for the black community on campus.

After months of preparation, the magazine officially launched its online publication in February. The team of seven women worked together to create “a space where black students on this campus can feel heard, can feel special and that they are needed and necessary on this campus,” Jones said.

Though they are an all female team now, they welcome anyone who wants to get involved, Jones said.

Sophomore Lindsay Gray, a member of the team, said during the creation process she and Jones emphasized the idea of the website satisfying different readers’ wants and needs to “give a safe environment where people can read articles for motivation, inspiration, their own personal enjoyment or just for additional information.”

Jones said the team plans to highlight a wide variety of stories from feature pieces on students and organizations to news that affects the black community on campus. BlackbELONg Magazine’s stories will also expand beyond Elon University’s campus.

Only 5.4% of the student body identifies as African American, according to the 2019-20 Elon FactBook, which is why Jones said she hopes readers are empowered by each piece.

Jones and her team also said they want readers to be intrigued and want to start conversations or ask questions about what they are reading.

“We want people to feel the excellence. We want people to know that this is what you are getting on Elon’s campus from the black community. Yes, we are small in numbers. But no, we are not small in strength,” Jones said.

A special section on the website is an “experiences” section, which Jones said was an important aspect to include. All pieces written in this section are anonymous and allow students to share their experiences on campus.

“All of our experiences are not the same whether people want to talk about it or see it. Depending on your skin color, you do have a different experience on this campus,” Jones said.

Jones and Gray said they are both happy with where BlackbELONg Magazine is at right now. The team has talked about creating physical copies but wants to expand its website first to make a lasting effect on campus.

“I don’t want it to leave when I graduate. I want it to be something that students know about when they get here and they want to join,” Jones said.

They also hope to expand and add more visual elements to the website. One way that Gray plans to do this is to create videos for different events on campus.

“Videos will include interviews or stories that shine light on different aspects of the black community and public events hosted by the Black Student Union,” Gray said.

There is a section on the BlackbELONg Magazine website that allows anyone to add a story idea they believe should be featured. Although they are not yet recognized as a student media organization by the university, it is something that Jones believes will “come when it’s meant to happen”.

So far the website has featured stories such as “Celebrating Black Beauty” and “Being Black at Elon University: T-Pain.”