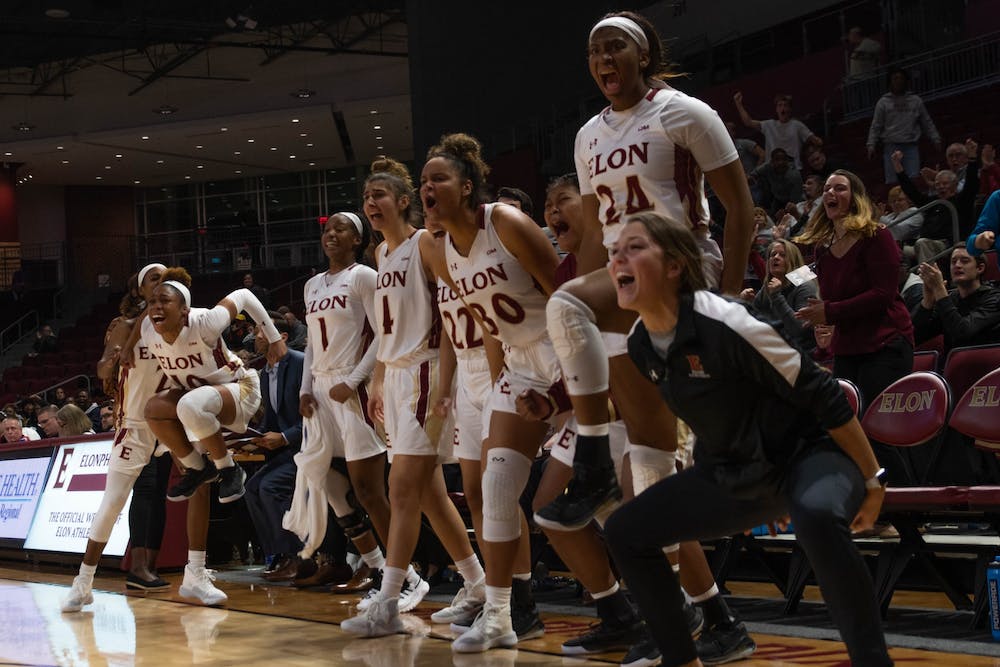 For the first time in program history, the Colonial Athletic Association’s women’s basketball tournament will be held in Schar Center at Elon University. This will be head coach Charlotte Smith’s sixth CAA tournament appearance.

This will be sophomore guard Brie Perpignan’s first CAA tournament at home. Perpignan said she feels confident going into the tournament because the Schar Center is “our house.”

“We have a feel for the gym. We just know we’re gonna go off in our house,” Perpignan said. “Once the game starts, once the ref blows the whistle, you’re just locked in and you don’t really notice a big difference of other team’s court, but just knowing we’re in our house is really that mentality.”

"You know, it's been a rocky road, but we've stayed the course and tried to stay unified as a team."

“It’s been a rocky road, but we’ve stayed the course and tried to stay unified as a team,” Smith said.

Under Smith, the Phoenix has already won two CAA tournaments, receiving a bid into the NCAA tournament after both victories.

Before those two victories, Smith said the original transition into the CAA made tournament play that year a little rocky. Although, she said once the team felt comfortable enough in the league, it was a chance for the team to come together and win its first championship.

“The first year we won at James Madison and that was huge for us because that was actually the first time that we had won on their court,” Smith said.

Smith said last year, the Phoenix had graduated several offensive players and she wasn’t sure if the team was convinced it could win another championship. She said watching Towson University win last year’s tournament over favored James Madison University gave her team some confidence that it is anyone’s game.

“That opened their eyes to like, ‘Maybe this lady knows what she’s talking about just a little bit,’” Smith said. “I felt the same way even this year, that it was wide open. You can just look at it. Even though James Madison doesn’t have a lot of losses, nor Drexel, they are teams that are beatable.”

Drexel University and JMU earned the No. 1 and No. 2 seed respectively and will not play in the first round of games. If Elon were to win against the Pride on Wednesday, it would go on to play the Dukes on March 12 at 5 p.m. The Phoenix have yet to beat the Dukes this season.

Smith and the Phoenix have found an alternative way to prepare for this mentality: by reading and watching a book and video series done by Brett Ledbetter and Becky Burleigh called “What Drives Winning.”

“Of course the stakes are higher,” Smith said. “What we’ve done is we’ve been watching a lot of ‘What Drives Winning’ videos, and we followed ‘What Drives Winning’ when they had about three videos on Oregon women’s basketball. The one thing that I hope they take away from those videos is that pressure creates abnormal behavior.”

Smith said she wanted to teach her team how to defuse pressure and doesn’t want the women to play “abnormally.” Perpignan said the videos helped the team gain a new perspective on situations that arise on the court.

“Saying our different inputs and what we got out of them made us realize, ‘OK, when we do face adversity or any other situation that we’ve noticed in those videos,’ we know how we all feel about it in just being able to talk about it and overcoming it,” Perpignan said.

Despite the added pressure of tournament play, Perpignan and the rest of the Phoenix are ready to get started with what its whole season has been leading up to.

“I love the feel of tournament play,” Perpignan said. “Everybody brings the best version of themself. We definitely know we’re going to bring our best version of ourselves to just stepping on the court, having fun and being the best team that we know we’re able to be.”