Close in the dugout, closing on a title 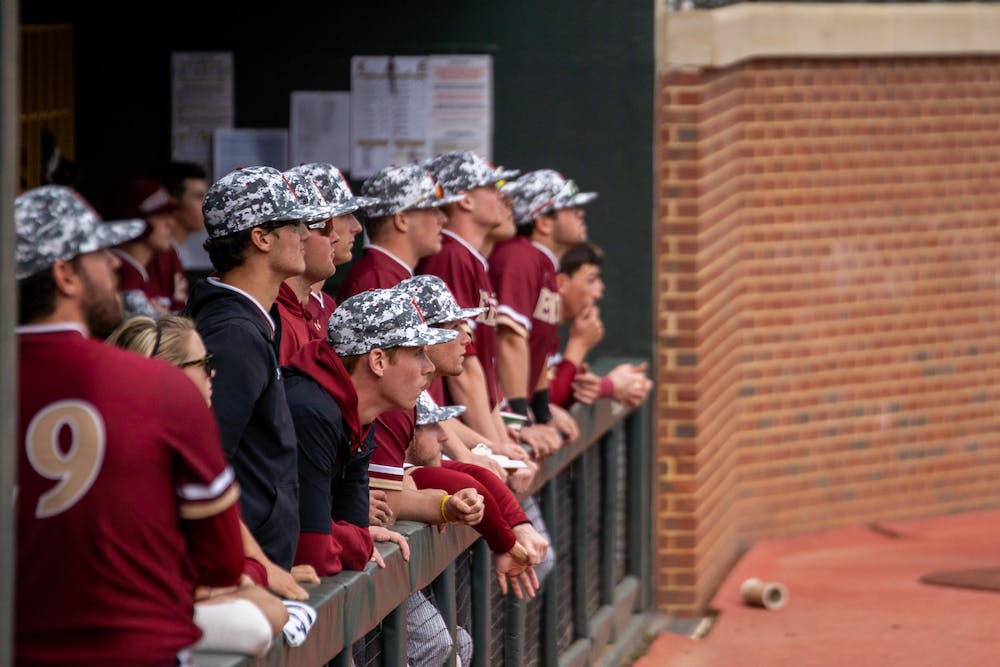 
The Elon University baseball team watches the game against the University of North Carolina Tarheels at UNC in Boshamer Stadium on Tuesday, Feb. 18. The Phoenix lost to the Tarheels 7-1

As Elon (6-6) takes the field, a unique set of skills and experience flood the diamond. This year’s team features freshman pitchers and position players navigating their first collegiate season, sophomores taking on larger roles and upperclassmen trying to lead the Phoenix back to the top of the Colonial Athletic Association standings.

Senior utility player Garrett Stonehouse echoed a similar sentiment and said this year’s squad is talented enough to get back to the top.

“We have a big picture and we want to obviously fulfill that goal,” Stonehouse said. “[We] came up a little short last year, and that’s kind of been our motivation. We want to get to that next step, and we obviously believe that we have enough talent to do so.”

The Phoenix has steadily risen in the conference ranks since entering the CAA and was able to finish the 2019 regular season in first place. In 2017, Stonehouse’s first year, Elon finished in sixth place in the conference.

Now in his fourth season as a Phoenix, Stonehouse said this year’s upperclassmen and freshman have a closer relationship than previous seasons.

“We’re a tight-knit group. … We do everything together on and off the field, and that’s something we never really had, especially in the early years,” Stonehouse said. “It’s not just your senior class out there doing that; it’s from freshmen. Your freshmen hanging out with seniors and vice versa, so it’s a good mix.”

The Phoenix are 12 games into the 2020 season. While the pitching staff has seen notable changes, Elon’s offense has remained consistent.

Infielders Cam Devanney and Ty Adcock moved on to professional baseball, but a few of the returning seniors include Stonehouse, infielders Adam Spurlin and Joe Satterfield, catcher Nick Cicci and outfielder Tyler Stanley.

Despite having experienced veterans who can create an advantage for the Phoenix, head coach Mike Kennedy said performing on the field is just as important.

“Getting experience is a big factor being successful at this level, but the experience doesn’t always mean you’re gonna be successful,” Kennedy said. “You’ve got to be able to handle the bat and execute certain situations. You got to keep getting better.”

After starting in nearly every game as a freshman, sophomore outfielder Anthony Galason said taking on a big role in his first season taught him the importance of failure. He also said he hopes to be a resource for the freshmen on the team.

Galason also said he is focused on the aspects of the game he can control.

“No matter where I’m at in the lineup, it’s a blessing that I’m able to be here,” Galason said. “I’m just going to play as hard as I can every single day. ... The only thing I can control is my energy and my preparation.”

In his third season, the left-handed Wetherbee has become the top weekend starting pitcher for the Phoenix, assuming a role that was once held by now-Baltimore Orioles minor league pitcher Kyle Brnovich. Behind Wetherbee on the weekend crew are freshman Spencer Bauer and senior Dean McCarthy.

In three 2020 starts, Wetherbee has maintained a 1.76 ERA to go along with 22 strikeouts in over 15 innings. He said playing behind players like Brnovich and George Kirby, now a pitcher in the Seattle Mariners system, has helped him prepare for his new role.

“I was blessed with such a great opportunity to be behind two great guys and great pitchers,” Wetherbee said. “It has put me in a real good position to sort of assume that role.”

The 2020 season is still in its the early stages, but conference play is right around the corner. With a blend of both new and weathered players up and down the Phoenix’s roster, Wetherbee said this year’s team will be great.