Elon Feminist for Equality Change and Transformation: A space for all feminists 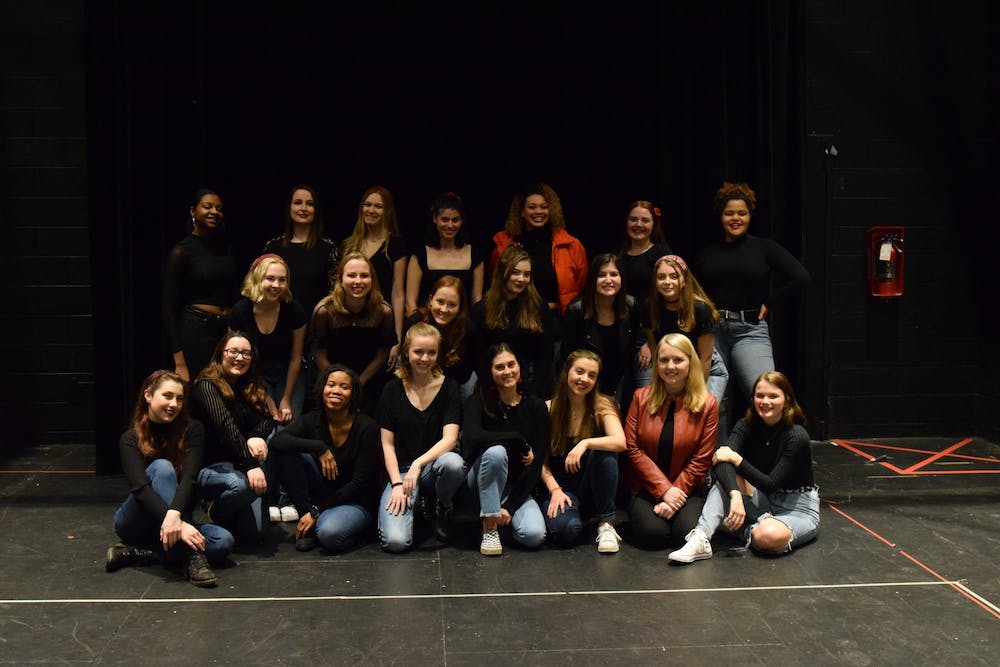 Photo by Trinity Battle | Elon News Network
Members of EFFECT posing prior to their performance in The Vagina Monologues.

Elon Feminists For Equality Change and Transformation is the longest running feminist organization on this campus. It has been around since 2007 and has lived throughout the different women to men ratios, which co-meeting chair Megan Whalen said she thinks “speaks to the evolution of Elon’s campus.”

Whalen joined EFFECT “pretty late” in her Elon career. Because of the gender based classes Whalen had to take for her political science major and criminal justice minor, classes such as Women in American Politcs, Feminism in Coalition, and Violence Against Women, Whalen said she really came to understand the importance of feminism.

“We want everyone to realize the ways in which every identity overlaps and plays a role in how we are treated in society. You are not welcome if you do not practice intersectional feminism,” Whalen said.

The term intersectional feminism was coined by Kimberlé Crenshaw in 1989, a Black lawyer who saw that race and gender were often seen as separate issues.

When she first joined, Whalen said it struck her how intentional EFFECT is about not marginalizing anyone. Beyond intersectionality, Whalen said the group also wants to include men in their efforts. EFFECT is open to men and non binary individuals.

Whalen’s role is to organize meetings and events, which is important to the organization as it transitions into becoming more event and resource based. EFFECT collaborates with organizations such as the Gender and LGBTQIA Center, which is centered around supporting and uplifting members of the LGBTQIA+ community, Students Promoting Awareness Change and Empowerment, which is dedicated to discussion regarding rape, domestic violence, and sexual assault on college campuses, and Students Promoting Awareness Responsiblity Knowledge and Success, which is dedicated to health, wellness and sexual safety.

EFFECT also takes on women’s history initiatives, such as when the group went to see the movie Harriet, a film about Hariet Tubman. In addition to women’s initiatives the group planned to see Just Mercy, a movie about a Black Harvard Law graduate who dedicates his career to providing legal counsel to men on death row and frees an innocent Black man.

"It's not just about women and women's issues, it's about social issues and social justice."

co-meeting chair of elon feminists for equality change and trasnformation

“It’s not just about women and women’s issues, it’s about social issues and social justice I think,” Whalen said.

Part of Whalen’s duties as co-events chair include setting up group activities like seeing movies, but also reserving space for one of the group’s larger initiatives, the Vagina Monologues.

“They look at me, just for a second, and there’s that, almost like, ‘Wait, what did she say? Did she just say vagina to me? And I’m like ‘Yeah. I did.”

EFFECT produces the show The Vagina Monologues, a play by Eve Ensler consisting of some 200 interviews highlighting femininity and womanhood with different kinds of women represented spanning race, age, and sexuality. All proceeds from the show go to Crossroads, an organization that supports victums of sexual assault, abuse, and human trafficking. Whalen said that the tradition at Elon is at least a decade old and takes place on campus every Valentine’s day.

“A lot of time we base our values on having a partner, so it’s good to show value in who one is as a single entity,” Whalen said. “The entire production is about female empowerment. It’s about what it means to be a woman and all of its complexities.”

For a show that is showcased every year on the same day, Whalen said it has the special talent of not getting old.

“It adapts every year to focus on what we’re experiencing now and how those moments change. [It] speaks to how applicable all of these individuals are to every woman and every person,” Whalen said “So it doesn’t matter that somebody saw it two years ago. I’ve seen it, like, three times but you see something different every time. And I think every actress brings something new to it.”

Whalen said her favorite monologue is “My Vagina is Angry,” and praised Lake Sims’ rendition of the piece. Whalen said that every actress brings something different to the table and that it’s always wonderful.

A student chose to be in the Vagina Monologues after seeing the show, Whalen said, and actively changed the way she saw, valued, and showed herself in today’s society.

In addition to the Vagina Monologues, another major event EFFECT works with is Take Back the Night, a “speak-out” dedicated to supporting and empowering victims of gender based violence. Julia Metz, coordinator for violence response, said Take Back the Night is “a movement created by women who were protesting and speaking out about sex, sexual violence and experiences with sexual violence.”

“Originally it was a way of reclaiming nighttime, when we think of most sexual assault happening,” Metz said.

Elon’s Take Back the night includes a survivor speak out as well as a resource fair following the event.

Whalen said though Elon has been very supportive of the organization, sometimes when they want to have events, Elon –in an effort to practice equity– pushes back on anything that might make a person feel excluded.

“There are lots of organizations that cater to many minute groups and interests, whereas feminism is applicable to every person on this campus,” Whalen said.