Chip shots and "chasing the weather" with men's golf 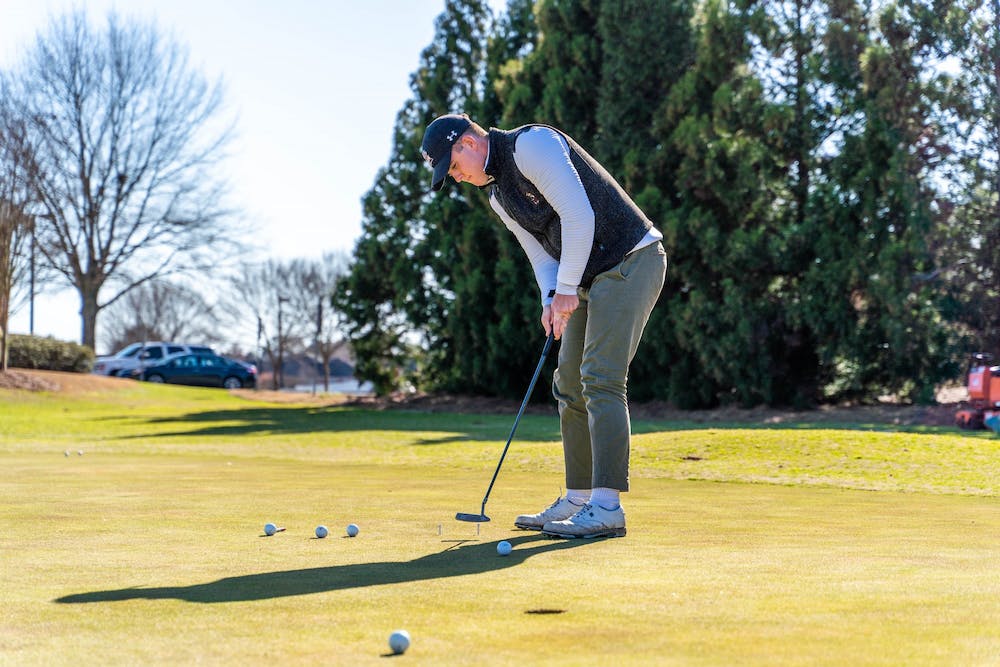 In the winter months when the weather is cold and the sky is dark, it can be hard to think about the bright green grass and shining sun associated with golf.

Elon men’s golf didn’t stick around for the cold of February. Instead, the team traveled to Palm City, Florida, to compete in the Martin Downs Collegiate tournament and prepare for the spring season.

Hill said the trip to Florida was very productive. Not only did the team produce good results, finishing fifth out of 14 teams, but players got much-needed practice time in optimal golfing conditions.

“Yes, we want to have the best finish we could possibly have winning a golf tournament, but you’re also chasing some practice time,” Hill said. “After the rounds, we had the opportunity to practice a little bit more and start doing those things that get you ready for the spring season.”

The trip to Florida also helped frame the mindset of the golfers. During the tournament, the team got a taste of peak-season golf life again. They were able to wear shorts and play in perfect weather. Hill said being exposed to these conditions right before the spring season reignites the players’ passion for golf.

“It gives you the golf bug,” Hill said. “As a golfer, that takes you right into, ‘Oh, gosh, it’s like watching the Masters. It’s like watching the PGA or the Tour Championship,’ … those things that trigger those golf emotions where you’re like, ‘Okay, I’m ready to play some golf.’”

Over Winter Term and throughout the month of February, two players emerged as leaders on the team: junior Graham Hutchinson and redshirt junior Max Ferrari. Both players went through Elon’s Phoenix Leadership Academy where they learned leadership techniques that can translate to the team. Taking leadership roles was a challenge for two golfers who are used to going about their game alone.

“I’ve always been a pretty individual person,” Hutchinson said. “I’ve put a lot of work in over the years since I was a young kid, and I just have a feel as to what works for me — certain swing thoughts that work for me and how to approach my round when I’m out there.”

Hutchinson and Ferrari have posted some of their best career performances this year. At the Golfweek Program Challenge in early September, the two led the Phoenix in the standings at sixth and 13th respectively. At the Martin Downs Collegiate, they led the team again. Hutchinson finished fourth at 10 under par. Ferrari finished eighth at six under par.

As two of the more experienced golfers on the team, they have taken it upon themselves to set an example for the underclassmen.

“I definitely try to lead by example — getting everywhere on time, giving everything 110%, just trying to set a good example for some of the younger guys who are coming up as far as what is expected of you, going to class and then coming here, workouts, just all that kind of stuff, just being punctual,” Hutchinson said.

According to Hutchinson, his leadership, as well as Ferrari’s leadership, goes past just leading by example. Hutchinson said he gives younger players physical tips, such as pointers on alignment, and mental tips, such as how to get in the right mindset for a tournament. For Ferrari, teaching is more about letting the players grow by themselves and giving pieces of advice when they ask. Together, the juniors are trying to establish a work ethic for the program as a whole.

“When they’re juniors and seniors, they’re going to be in this position,” Hutchinson said. “They’re going to rely on the kind of stuff that they learned in their first couple years. So, if we can set a good example for the young guys right now, I think that’s pretty valuable.”

Winter Term was a turning point for the Phoenix. The team was able to get on the course a lot in January because the weather in Elon remained mild, even reaching the 60s at times. This allowed the golfers to get work in when they didn’t have tournaments to play.

“This J-Term, I really liked the way that we worked,” Hutchinson said “We worked, I think, harder than we ever have as a team.”

"Off the course is where you can really develop that trust for your teammates. So when you're out there playing just knowing that you got a good relationship with the other guy who's out there as well."

“Off the course is where you can really develop that trust for your teammates. So, when you’re out there playing just knowing that you got a good relationship with that other guy who’s out there as well,” Ferrari said.

Golf is, for the most part, an individual’s game rather than a team sport. But Ferrari said having trust in your teammates can improve an individual’s game. When golfers trust each other it allows them to play without hesitation and be willing to “risk it all.”

It lets you be more aggressive out there,” Ferrari said. “You don’t have anything to protect because you have other guys that you know are going to put good scores together.”

The Phoenix has five tournaments before the Colonial Athletic Association championship April 24-26, starting with the Pinehurst Intercollegiate, which begins on Friday. Ferrari said the goal for this season is much bigger than results; it’s about playing with no regrets.

“Obviously, winning conference would be sweet, and that’s what we’re trying to do and maybe go further than that. But more so, everyone having that own inner peace of ‘I feel like we left it all out there.’”