Elon is bringing the seasons to the stage 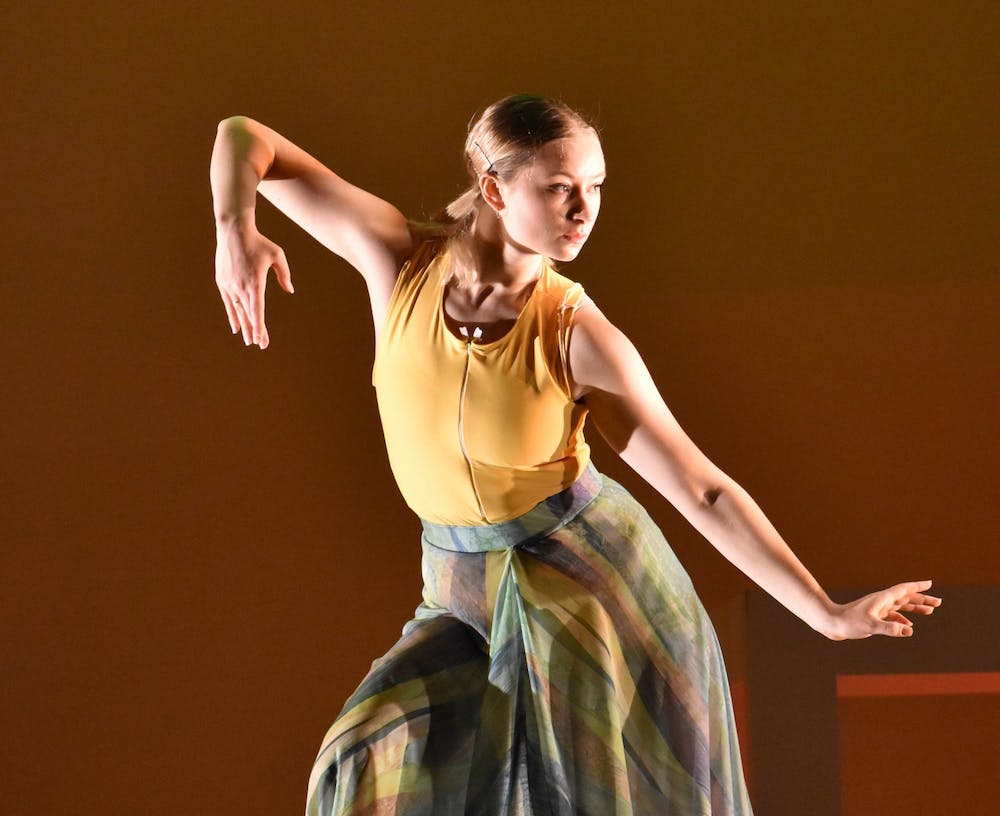 Photo by Benjamin Muse | Elon News Network
Senior Isabel Ganovsky goes through a dress rehersal on Monday, March 2. Just a few days before the opening of the “Rites of Seasons.”

Spring might be approaching, but all four seasons will be brought to Elon’s McCrary Theatre this weekend.

Elon University’s Department of Performing Arts is putting on its annual spring concert,“Rites of Seasons.” The performance puts a twist on the average dance show. Lauren Kearns, director and choreographer of the show, said the concept of the show is the result of a two-year research process. The show will finally be featured on the stage of McCrary Theatre on March 5-8.

Focusing on climate change and feelings associated with different seasons, Kearns said the show flows continuously through the different times of the year.

“‘Rites of Seasons’ highlights the uniqueness of each season. The evolving ecological terrain of each season and the ritual of changing seasons are prominently featured in the movement, music and visual design elements,” Kearns said.

Along with the 38 performers on stage, the show has a large technical and artistic team behind it. Kearns said it was a shared effort to execute the show.

“The four choreographers, designers and music composer extensively collaborated to create a shared narrative and a seamless experience for the audience,” Kearns said.

Kearns worked alongside three other choreographers: assistant professors of dance Casey Avaunt and Renay Aumiller and guest artist Yoshito Sakuraba. While they each choreographed a certain season, they have worked together on many elements, such as the transitions from piece to piece.

Clay Stevenson, senior lecturer in music, is the composer for the show. Throughout each performance, dancers will be accompanied by live student musicians and singers.

After extensive collaboration between the technical and artistic sides of the show, it was decided this was an important element to incorporate.

“I thought it would be most beneficial from an artistic point of view to have a composer create original music and that having an original score created would support the cohesion of the show,” Kearns said.

Sophomore Allie Strouse is making a return to the stage in “Rites of Seasons.” She said the show is different from anything she’s ever done. The process of bringing the piece to life was long, but Strouse said she enjoyed every second of it.

“I really enjoyed the process of working on this piece. We met during Winter Term for three hours every day in the morning, and it was really nice to work at it all at once and really set out focus toward it,” Strouse said.

Strouse grew up dancing, and although she didn’t fall in love with the art until high school, she said the dance program at Elon has only made her love it more. As a double major in dance and strategic communications, she said she rarely has downtime.

"Our lives are crazy on a daily basis, but to me, it's all worth it because I truly love the program and the people."

“Our lives are crazy on a daily basis, but to me, it’s all worth it because I truly love the program and the people,” Strouse said.

Strouse is in the fall part of the show, choreographed by Aumiller, which touches on not only the season itself but the action of falling as well. Aumiller challenged the dancers during the first few rehearsals to think about times they have physically and mentally fallen or helped others who were falling. A big part of this challenge was having the dancers do a lot of personal writing. Strouse said her connection with the piece is a special one since she has experienced many ups and downs throughout her life.

“I definitely think that there is a personal connection for all of us in the piece, and many of us continue to find more and more connections as we go,” Strouse said.

The many artistic elements are just some of the reasons Kearns saids everyone should take the time to see this show.