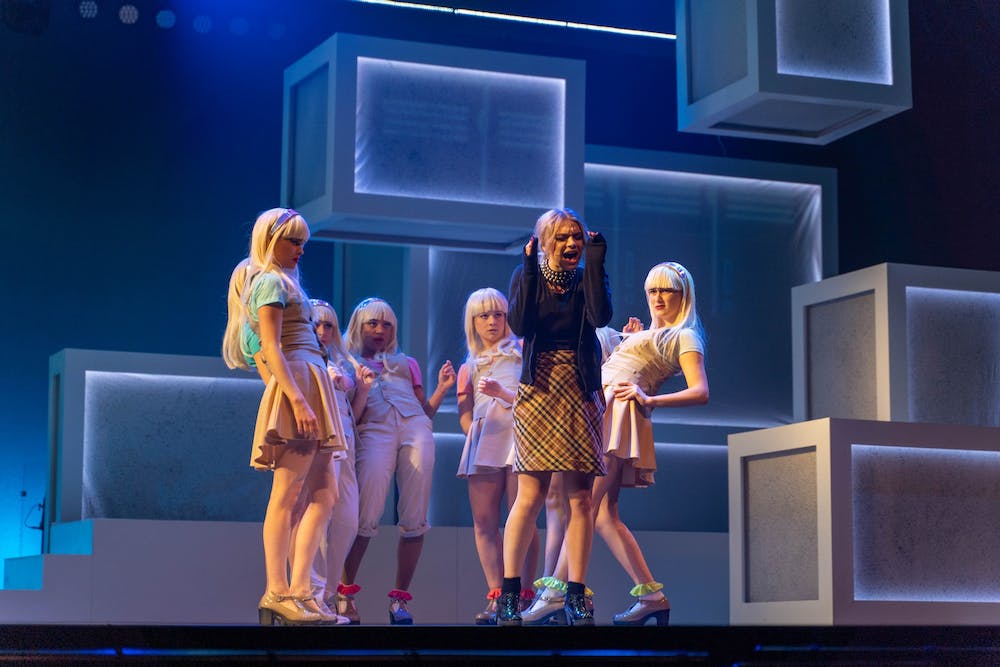 Photo by Clare Grant | Elon News Network
Driana Mullen sings during the practice of their performance of We Will Rock You in McCrary Theater on Tuesday, Feb. 11.

Elon University’s upcoming performance of “We Will Rock You,” guest-directed by Paul Stancato, explores themes of non-conformity and oppression in a dystopian society. By the end of the night, audiences will get to experience a rock concert with all the hits from British pop rock band Queen.

The show, written by Ben Elton, is a jukebox musical, meaning the plot heavily centers around pre-existing songs. This contrasts with other musicals where the songs are written for that particular show, according to sophomore John Zamborsky. Zamborsky is set to play the role of Galileo, one of the production’s leads.

“Queen is probably the most famous British pop rock band, so with that being said, they had all these songs, and they were so theatrical and they decided to make this plot around these songs,” Zamborsky said.

The musical is set in a futuristic society where individual expression is banned. The plot follows the adventures of two characters who don’t fit the status quo — Galileo and Scaramouche — who meet after getting arrested. Once the two escape, they find a group of underground rebels called the Bohemians who also resist conforming to the oppressive society.

“We find out that Galileo’s purpose is to bring back music, to bring back individual expression, … and all the while we’re being tracked by the government,” said junior Dariana Mullen, who plays Scaramouche.

"Queen is probably the most famous british pop rock band, so with that being said, they had all these songs, and they were so theatrical and they decided to make this plot around these songs."

“We Will Rock You” highlights the consequences of a world where art is banned and where individuality is suppressed through Galileo and Scaramouche’s story.

“I think the biggest thing that you can take out of this is the importance of not only art, theater, music, songs, literature, anything like that and the importance of individuality,” Zamborksy said. “[At] the start of the show, you see sort of the corrupt world that they have fallen into because of a lack of expression and a lack of a voice, the lack of an outlet.”

Mullen says the relationship between the two leads plays a crucial part in the show.

Zamborsky hopes the audience is as excited as he is.

“Our job really is to entertain, to give people an escape for a few hours and that is definitely what you get from the show,” Zamborsky said. “You follow this very emotionally-driven plot, but then at the very end of it, it’s just a rock concert. You’ll have a great time.”