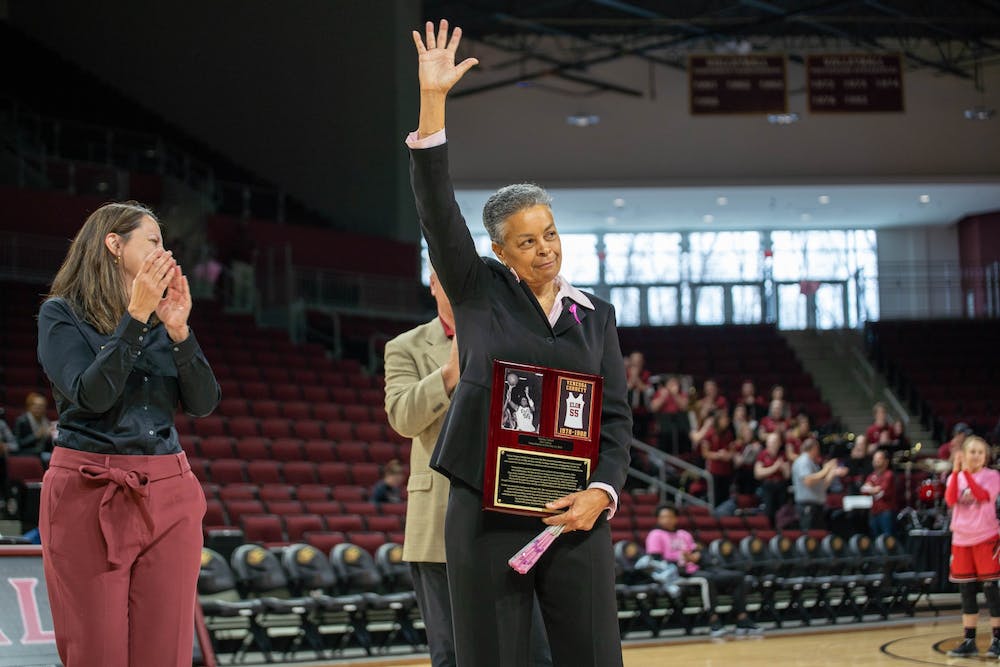 Only this time, she wasn’t strapping on her high-tops. She was standing in the middle of the court as a pioneer in Elon women’s sports. She would become the first ever female Phoenix athlete to have her jersey retired.

“I’m really honored,” Corbett said. “The biggest thing is to still be here to see the event, and that’s the biggest honor [to have] my family here, my friends here and my teammates.”

Corbett’s jersey retirement comes on a very special day, as the game was the designated “Play4Kay” game, in which schools across the country celebrate former inaugural coach Kay Yow. Though Yow was diagnosed with breast cancer in 1987, she continued to mentor young women in both the college and olympic ranks for years, having an immeasurable impact on young women while fighting a deadly disease. Yow’s determination and valor lead to the creation of the Kay Yow Cancer Fund. Players often don pink apparel in support of women with breast cancer.

"the biggest thing is to still be here to see the event And that's the biggest honor [to have]my family here, my friends here and my teammates."

The jersey retirement was extra special for Corbett, who was honored at halftime with other survivors because she too is a survivor of breast cancer.

Corbett picked the day for her jersey to be retired but didn’t quite know how impactful it would be.

“When I picked the day, I had no idea it was the Play-for-Kay game,” Corbett said. “I was looking at a day that would kind of coincide with me turning 60 the first of the month, so everything just kind of took off.”

Corbett continued to be a force in the community after basketball, serving as a community detention officer and being an advocate in the fight against breast cancer.

“When you get out in the community, and especially as a survivor, other people see you out there. They are aware that you can overcome,” Corbett said. “They see that you know, at one level, you’re performing in basketball, but as well, you go through the same trials and tribulation like normal people. We can do this. We can battle, we can finish the battle.”

Corbett has made history in what looks to be a long line of talented Elon women’s jerseys being retired and forever cemented in Phoenix history. She said she thinks the Phoenix program is trending in the right direction.

Elon women’s basketball has produced quite the storied history. The program began its inaugural season in 1971 under Yow, who went on to become one of the most influential figures in women’s sports. She left the Phoenix in 1975 to become the head coach of the North Carolina State Wolfpack. Yow amassed a 737-344 record with Elon and NC State and reached the NCAA Final Four in 1997-98 with the Wolfpack.

“Coach Smith has a great vision,” Corbett said. “I just think [the program] has no other choice but to go forward — you know, she has great leadership, she has great vision. I look forward to coach Smith and whatever players she brings will have that same vision. And I think that’s what she goes out and recruits: people that have our same vision and the love for the game.”