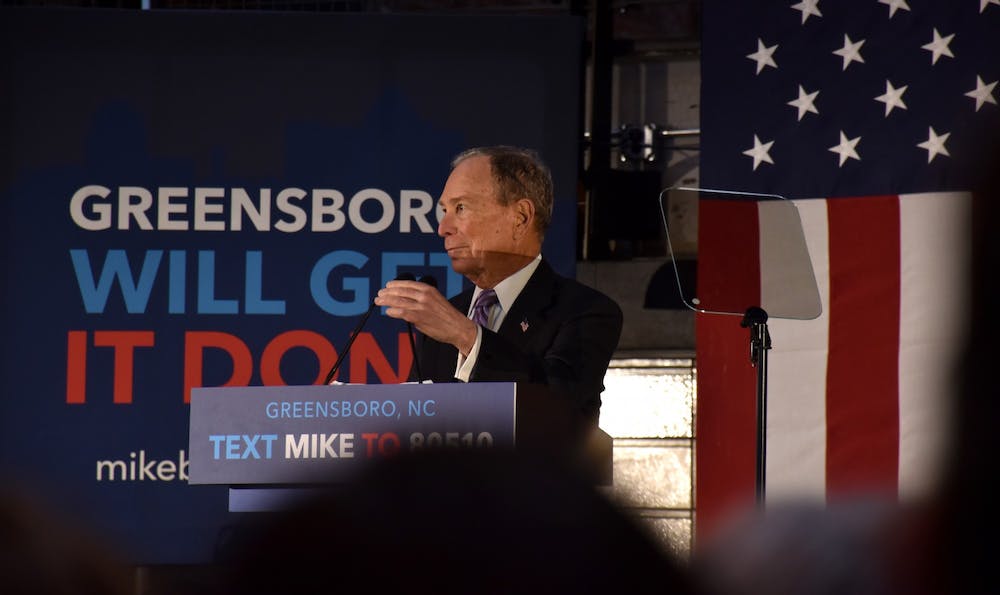 Although Bloomberg mistakenly referred to the location of his event as Gainsborough, he did recognize Greensboro’s role in U.S. history.

“It’s particularly meaningful to me to be here on the 60th anniversary of the Woolworth’s sit-ins,” Bloomberg said, referencing the Greensboro civil rights protests of 1960.

Bloomberg also said the state of North Carolina “deserves just as much attention” as South Carolina, where candidates such as former Vice President Joe Biden have turned their attention following the New Hampshire primary.

Elon senior and president of Young Democrats of Alamance County Emma Greenberg attended the event, and said she was “pretty disappointed” with Bloomberg’s lack of policy discussion.

“He was running on the fact that he thinks he's the best person to beat Trump simply because he's a billionaire, he has executive experience, he's from New York,” Greenberg said. “But I still cannot tell you a single one of his policies. And I don't think many people could.”

Greenberg added that Bloomberg is a “comfortable” option for moderate voters.

“He's not going to produce the big revolutionary changes that Bernie [Sanders] and [Elizabeth] Warren are promising,” she said. “He's like a Biden and now he's gonna bring you back to the good old days of Obama and a lot of people want that, they don't want the bigger change.”

Kevin and Mary Haggerty, Greensboro residents in attendance, said they were looking into Bloomberg because they thought he could beat Trump.

“Bloomberg has some baggage,” Kevin said, referring to Bloomberg’s stop-and-frisk controversy. “I think he can overcome it fairly seriously. And I think that he needs to learn how to fight dirty in an elegant way.”

Baylor Rodman and Jon Sarver, Jr. contributed to this report.