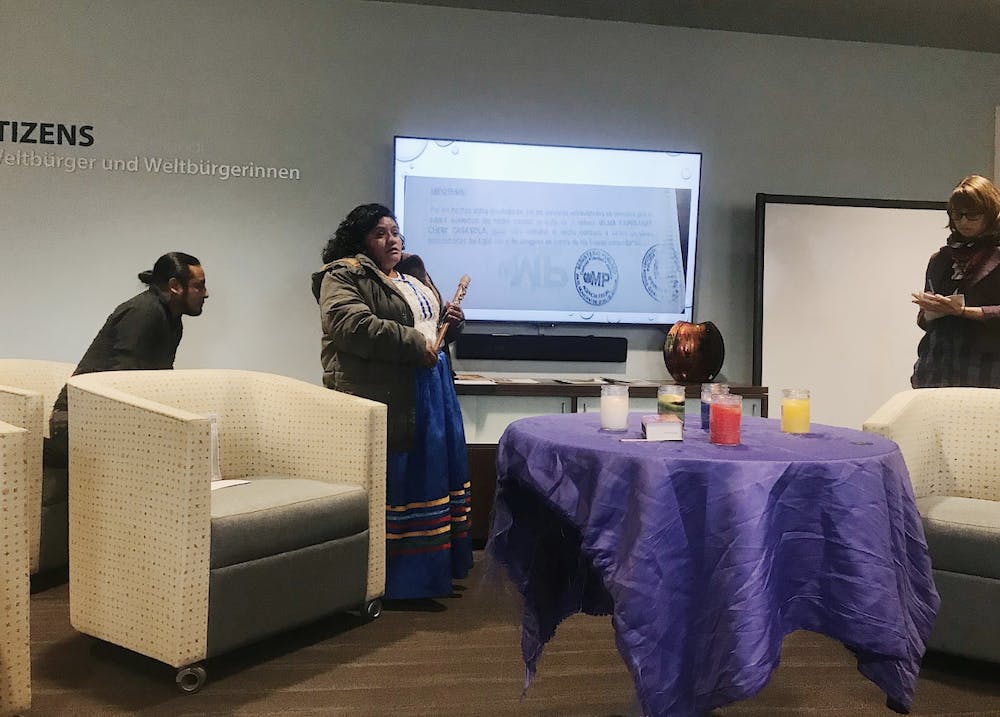 Elodia Castillo visited Elon University Feb. 25 for her speaker tour La Lucha Sigue, or “The Struggle Continues,”  to talk about the struggles of indigenous Mayan communities being erased in Guatemala, and their efforts to reclaim the land and ancestral practices that were once theirs. She and Roderico Diaz, a photojournalist who focuses on images of migration and indigenous struggle, gave a presentation followed by a question and answer session and reception.

From 1960-1996, a civil war broke out in Guatemala that saw brutality against women and indigenous communities within the country. According to PBS, over 200,000 indigenous Mayans died during the war, the majority of deaths carried out by the government. Castillo, an elected leader for the community of Cho’rti people in Eastern Guatemala, has been fighting for the rights of indigenous people in Guatemala ever since.

“We need to recover our ancestral land, knowledge, ethnic identity, spirituality and recover the way of life between men and women,” Castillo says. “We have been erased as a community.”

Castillo works with the nongovernmental organization COMUNDICH, which stands for the Coordination of Associations and Communities for the Integral Development of the Cho’rti’ People. It supports 48 indigenous Cho’rti’ communities in litigation processes, and focuses on the use of law in their fight rather than violence.

Gaining back land is one of the primary goals it has, but it also focuses on issues such as malnutrition within the communities as well as the high levels of youth migration from the area. Diaz’s photography focuses on this aspect of migration, and is a current issue in many Latin American countries currently, he said.

“Many of these youths are being forced into organized crime rings,” Diaz said. “We can no longer distinguish the line where the government ends and organized crime begins.”

This was the first event in the new Border and Migration Series held by El Centro and the Department of World Languages, which focuses on aspects of migration and struggle within Latinx communities. Students and faculty filled Carlton Commons to come see Castillo speak, and she expressed her gratitude for everyone who came.

“As students, professors, and human beings alike, all of us have a role in this fight,” Castillo says. “I hope we can come together in solidarity because we all have a place in this world.”