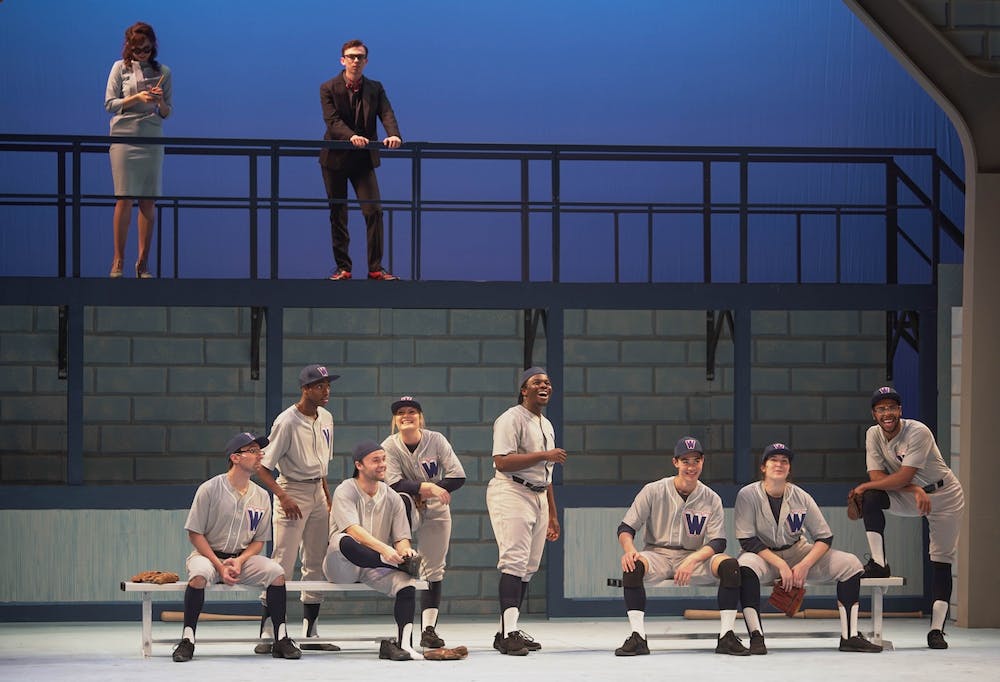 Director Douglas Hall turned 1950s-based “Damn Yankees” into a story relevant in the modern day for the Elon University drama department’s annual fall musical. Despite the play’s age, Hall said he believes that its story is still worthwhile.

Second Place: Smooth Progressions
Third Place: Once On This Island

“There’s still a place for [more traditional musicals] if we approach them through a more contemporary lens and ask ourselves why are we telling this story,” Hall said.

Hall wanted to use the show to ask “where ethics and morals land in our decision-making process and how far will you go.” In order to achieve this, Hall re-imagined elements of the play to fit into modern day standards.

He divided the role of Mr. Applegate, who is actually the devil, into a male and female part in order to show how the devil changes appearances in different situations.

Additionally, the opening number “Six Months Out of Every Year” conventionally depicts the wife characters bemoaning the lack of attention from their husbands. Hall explored the gender roles present in the song by flipping the positions of one couple so that the wife ignored the husband in order to try and “ungender” the performance a little.

Music director Valerie Maze considers “Damn Yankees” being different from other shows a selling point for younger generations. “The show is not done all the time, so it was probably something different,” Maze said.

"Damn Yankees" had two successful Broadway runs, opening first in 1955 at the Adelphi Theatre before being revived in 1994 at the Marquis Theatre.

Senior actor Oliver Davids played Joe Boyd, and he observed the challenges of bringing the musical into this century.

“It’s important to not ignore where we’ve come from,” Davids said. According to Davids, the cast questioned some of the elements of the play, but Hall opened the conversation for the cast to discuss these controversial components.

Choreographer Deb Leamy believes that these conversations made the experience very collaborative and positive. “We invited a lot of back and forth and feedback,” she said. “I wanted them to feel like we were creating this together.”

Leamy considers the subject matter of the play alluring to the audience. “It’s joyful and fun. It’s much easier to have success with a subject that’s happy and joyful”.

Maze thinks that maintaining consistency for each performance made the play successful, and she said she feels the cast stepped up for all of their performances. “The more performances we did, the more comfortable they got,” Maze said.