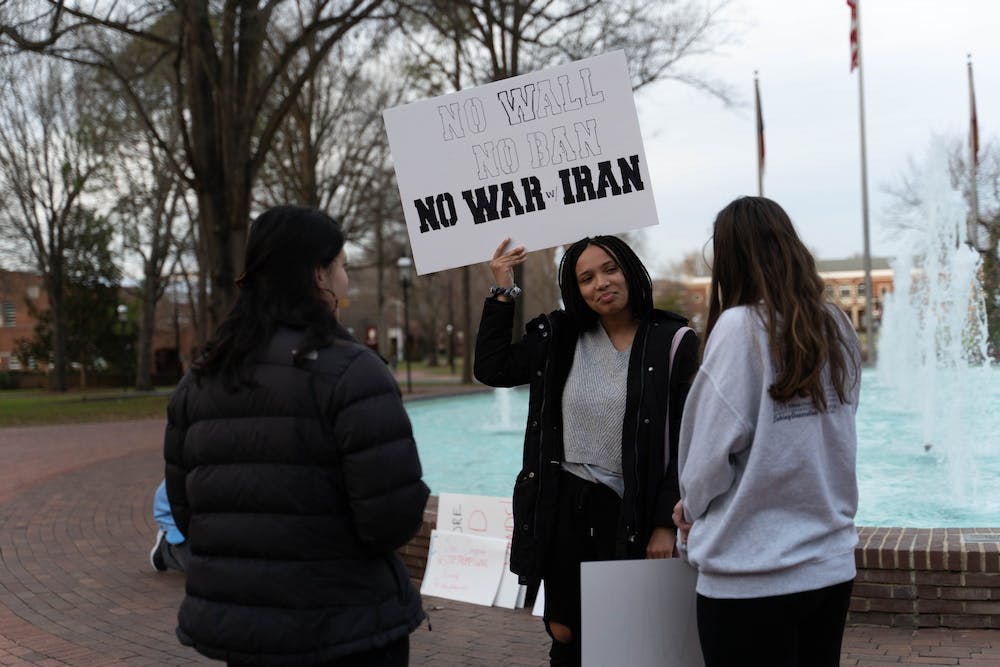 
Elon sophomore Trinity Dixon protesting against the war with Iran outside of the Alamance Building on Jan. 9, 2020.

In response to recent conflict between the United States and Iran— after the U.S. military decided to kill Iranian Gen. Qassem Soleimani an action the United States Department of Defense says would "protect U.S. personnel abroad," — Elon University students and community members decided to protest.

While the House of Representatives voted in favor 224-194 of a war resolution — which will require President Donald Trump to get congressional approval of military action— organizer and Elon junior Jay Tiemann decided to take action in support of the resolution. Tiemann said he does not want to see the United States go to war with Iran.

"If I didn't speak out my actions could have contributed to hundreds of thousands of brown people being slaughtered abroad," Tiemann said.

The protest at Elon is a part of a national No War With Iran: Day of Action with over 300 events taking place across the country, four of which are in North Carolina. A group of over a dozen people gathered outside Alamance Building and marched to Moseley Center.

Sally Johnson a Burlington resident and activist who remembered protests to the Vietnam war in college, said she was angry with the government.

"I came because war is wrong," Johnson said. "Trump doesn't think before he makes decisions."

Elon Freshman Faith Minor participated in the protest because she thinks it goes against the desires of the American people.

"We are the younger generation," Minor said. "We are the new voters."

After fear of war, college students have become paranoid online that signing up for the Free Application for Federal Student Aid automatically signed them up for selective service known as the draft.

FAFSA offered clarity on the situation stating  that "registering with Selective Service has been a longstanding requirement to receive student aid/a federal job."

We know there are questions on this…registering with Selective Service has been a longstanding requirement to receive federal student aid/a federal job. However, the U.S. military has been all-volunteer since 1973 & Congress would need to pass a new law to institute a draft. 1/2