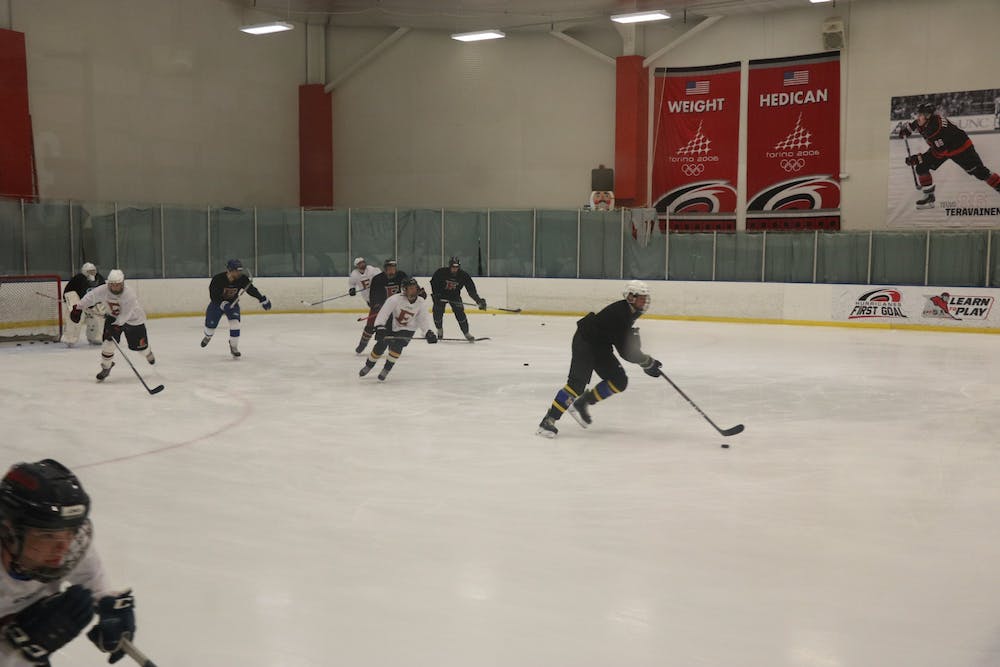 Photo by Amanda Gibson | Elon News Network
The Elon University club hockey team skates during one of its many late-night practices more than a half hour away from campus.

Now, Elon is a part of the Division II Atlantic Coast Collegiate Hockey League, where the team participates in the Carolina West Division alongside Duke University, University of North Carolina Charlotte and Wake Forest University. Currently sitting at 1-5-1 for the 2019-2020 regular season, the Phoenix still has four remaining games but nonetheless, many positive moments to reflect on from this season.

“From my freshman year until now, the team has gotten better every year,” Charlie Pippert said.

Pippert is a veteran defenseman who is also president of Club Hockey. He manages meetings, forms and anything else necessary for running a club sport at a university. With freshmen making up half of this year’s team, Pippert has been a leader for the underclassman and said he tries to lead his team by example.

“I’m not really the type of guy to go scream my head off in the locker room,” Pippert said. “I go out there and try to set a tone.”

Freshman defenseman Tate Dahlgren is one of this year’s newcomers. Originally from Lake Forest, Illinois, he discussed the transition from high school hockey.

“In terms of the level of play, obviously, the guys are a lot better,” Dahlgren said. “You have other kids taking gap years and playing juniors. The kids are also a lot bigger and it’s a really physical league.”

Junior hockey is a level of competition for teens that plan on playing collegiately. And when many of these kids decide they no longer want to play in Division I sports, these players settle for their university club teams. With Elon taking on larger schools such as Duke and UNC Chapel Hill, it can put the team at a talent disadvantage in terms of drawing from the student population. Pippert recognizes the disadvantage and said he works on increasing Club Hockey’s presence on campus.

"every once in a while, one of us is walking around in a hockey sweatshirt and we get a 'we have a hockey team?' We're kind of the new kid on the block. Elon isn't as well-known as some of the Dukes or UNCs we play. so, we definitely want to beat those teams and give elon hockey a name."

“Every once in a while, one of us is walking around in a hockey sweatshirt and we get a, ‘We have a hockey team?’” Pippert said. “We’re kind of the new kids on the block. Elon isn’t as well-known as some of the Dukes or UNCs we play. So, we definitely want to beat those teams and give Elon hockey a name.”

“We are trying to get people involved in the program that have connections with junior teams or with high schools,” Pippert said. He said these connections help to show younger players their potential in collegiate hockey and answer their questions.

For Dahlgren, that meant meeting with coach Paul Pechmann during his visit to Elon as a high school senior to get a better idea of the hockey program on campus. Pechmann, a former University of Connecticut hockey player, has experience coaching juniors and other high levels of hockey. He even gave Dahlgren a workout plan for the summer prior to his freshman year in preparation for the season.

For ice, club hockey travels to the Orange County Sportsplex in Raleigh, a half-hour commute every day just for practice. Compared to a soccer field or basketball court, ice time doesn’t come easy, forcing late nights and long weekends for the players. But the team takes pride in its high level of commitment.

Long car rides and late nights on the ice have made the Phoenix club hockey a tight-knit team.

According to Pippert, part of the battle for leading his team is working to get everyone to buy into the same message, and that was one of the goals Pippert said he wants to achieve this year as captain.

“The guys last year are trying to reform and change the mindset that, while it is club, hockey is still competitive. It still requires a big commitment, and you still have to buy into it,” Pippert said.

Dahlgren believes Elon hockey has changed how he views his teammates. In college, there’s not a junior varsity team, and everyone is seen as equal. Pippert and other seniors have paved the way for Elon hockey and emphasized that it’s much more than just a group of hockey players.

“I remember freshman year when I played hockey in high school it was seen as, ‘Oh, you’re a freshman? You’re not really seen as part of the team,’” Dahlgren said. “Here, everyone’s integrated and treated the same way.”