Students and professors are staying aware of human trafficking

Elon community members raise awareness about human trafficking, which claims thousands of victims in the US every year 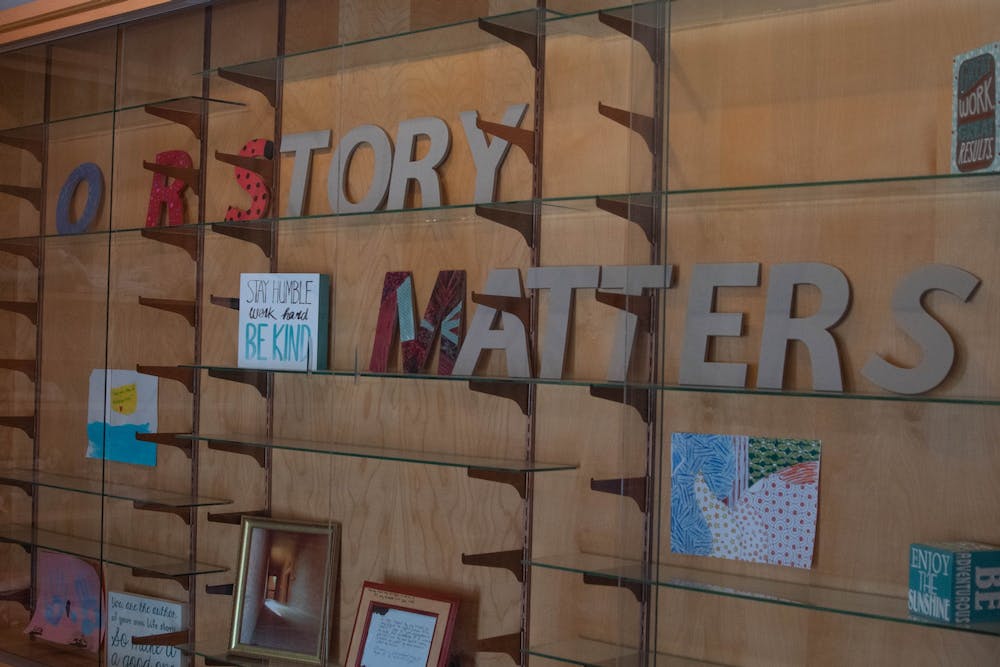 Photo by Thomas Denome | Elon News Network
A wall at Crossroads Sexual Assault Response and Resource Center. The words "Your Story Matters" are laid out with the "Y" and "U" in "Your" missing. The letters are currently being decoarted by survivors of human trafficking and sexual assault.

Freshman Corinne Orgettas said she has never been able to pinpoint the source of her fear of human trafficking — but the constant news coverage certainly hasn’t helped.

According to Orgettas, these fears only intensified after a friend of hers narrowly escaped a kidnapping attempt by someone who was linked to a sex trafficking organization.  Orgettas said a man tried to lure her friend into his car while she was at an ATM in her hometown. She said when police reviewed the tapes, they recognized the man from previous instances of sex trafficking.

According to the U.S. Department of Homeland Security, human trafficking is defined as involving, “the use of force, fraud, or coercion to obtain some type of labor or commercial sex act.”

Orgettas said as students, there are limitations in addressing human trafficking and bringing about change.

"It's hard at our age to do anything about it. We're limited to what we can do because it's such a dangerous industry."

“It’s hard at our age to do anything about it. We’re limited in what we can do because it’s such a dangerous industry,” Orgettas said.

This didn’t stop Orgettas. She said she plans to create campaigns to raise awareness about human trafficking both on Elon’s campus and in the greater Alamance community.

She said she would also like the group to work with Crossroads Cares, a local organization fighting human trafficking and other human rights issues in the county. According to its website, the organization focuses on providing safe locations for forensic interviews, trauma-informed therapy and other services that promote advocacy, intervention and diversion.

According to Orgettas, the road to creating a club like this on Elon’s campus is complicated. In a follow-up email, Orgettas said, “Unfortunately, it is a long and detailed process, so the likelihood of this organization starting this year is low.” Orgettas said she has to work with student involvement to register the club officially at a later date. She said she is hoping to have it up and running by next fall.

Orgettas said her experiences have opened her eyes to how little the American public knows of this issue. “I felt upset that I wasn’t aware of all the things that were going on, and I think that it’s important for other people to know what’s going on,” she said.

Orgettas’ work is not the only movement on campus aimed at spreading awareness about human trafficking.

In fact, Orgettas said part of her inspiration to start taking action stemmed from a class called “The Economics of Human Trafficking,” which Orgettas said she took one semester.

“Every time I left that class, as much as I loved it, I was put into almost like a depression because I was so sad that these things were going on and that there are people still living in slavery today,” Orgettas said. “It’s motivated me to want to make a difference in that way.”

The Elon professor behind this class is Casey DiRienzo, professor of economics. DiRienzo said she began researching human trafficking through an economic lens after a colleague brought her a new dataset on global trafficking. She compared the subject to tugging on a string to see what was at the end of it, “I couldn’t stop pulling the string,” she said.

DiRienzo’s findings include how more female participation in government reduces corruption, a new metric for measuring income inequality as it relates to trafficking and how country borders impact the rates of human trafficking.

DiRienzo said she started the class because she noticed student interest in the topic.

After teaching two sections of it this semester, she claims the class is having a sizable impact on the students, who are asking how they can get involved and are informing their younger siblings of the dangers of human trafficking in the modern era.

“I just read a bunch of student essays that said, ‘I thought we were too good for this here. I had no idea that it was everywhere,’” DiRienzo said.

DiRienzo said human trafficking is an issue that is often misunderstood, “People don’t understand that this isn’t a foreign problem. This is a global problem. In the US, in every state, in every city, you can find it,” she said.

According to the International Labor Organization, an estimated 40.3 million victims of human trafficking exist around the world, 25% of them children.

Human trafficking happens everywhere according to DiRienzo, “In the US, in every state, in every city, you can find it,” she said, estimating that the number of victims in the US ranges from 50,000 to 400,000.

This includes Alamance County. In fact, in September, there was an attempt by North Carolina police, the State Bureau of Investigation and the Department of Homeland Security to crack down on human trafficking.

This resulted in 28 arrests on charges of prostitution or soliciting prostitution, likely linked to sex trafficking in the area.

Local organizations are also working to help victims of human trafficking in the area. Crossroads Cares, the Burlington-based human rights organization, works to raise awareness in the community, as well as advocate for and provide counseling services to those who have fallen victim to human trafficking.

DiRienzo said she will be continuing her human trafficking class online this summer and is set to teach it again next fall semester.

More than anything, DiRienzo said we all need to be aware of the real dangers of human trafficking. “Traffickers count on us not knowing the signs,” she said.