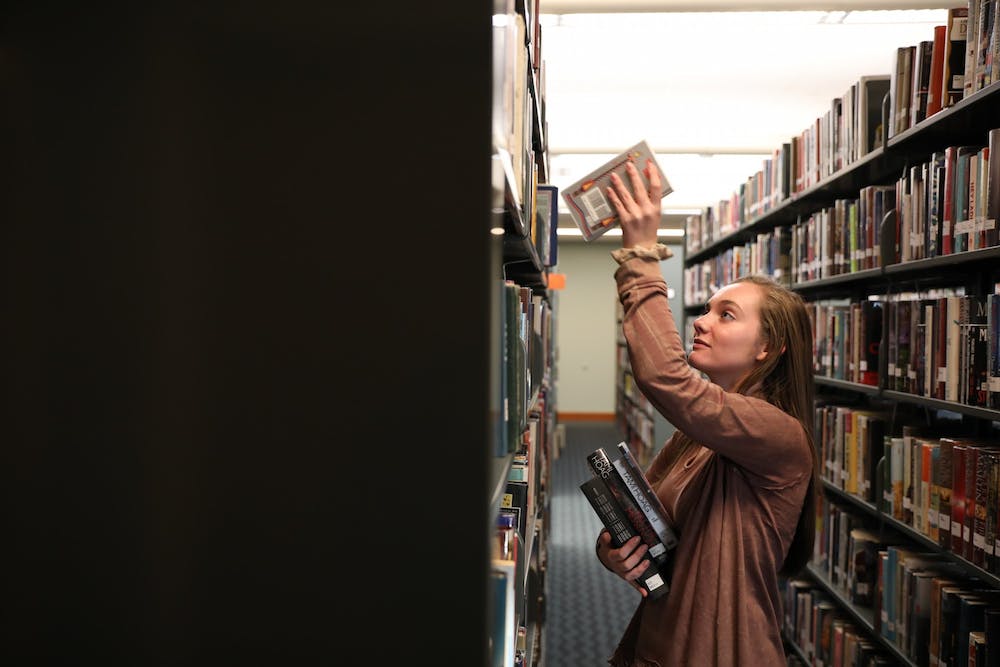 Sophomore Christy Dickman balanced a tower of books in her hands as she made her way to the checkout desk at Belk Library. She said she hoped there’s no limit to how many she can have at a time; she is always eager to pique her interest in fiction.

Not much has changed since Dickman was a child. Now a double major in creative writing and political science, Dickman is an avid reader and writer. In November, she won her first award in college fiction writing.

Xhenet Aliu, fiction writer and the second author to visit Elon University this semester as part of the Visiting Writer’s Series, judged the fiction writing contest which Dickman won. While at Elon, she shared tips with creative writing students about the writing process and being a writer.

“When I met someone, I said I was a librarian, a private investigator, a professor and I also write. I struggled for a long time with the idea of deserving to identify as a writer,” Aliu said, listing up the professions she’s had over the years.

Andrew Perry, associate professor of English, said this tradition of visiting writers has been going on for more than 20 years. Earlier this fall, poet Allison Joseph visited Elon. The next writer visiting is novelist and essayist Belle Boggs, who will visit Elon in March.

“We bring in a poet, a fiction writer and an essayist every year,” Perry said.

Even though all four professors in the creative writing department are published authors, Perry said it’s valuable to bring other voices to campus as well.

“It’s great because it allows the students to see somebody in the field who’s been successful and becoming successful,” Dickman said. “It makes it seem possible.”

Along with a reading of her latest novel, “Brass,” Aliu visited classes, answered students’ questions and attended writing workshops.

Students in the creative writing senior seminar class, taught by Perry, also had a reading of their own work on Dec. 2 at The Downtown Acting Studio on Williamson Ave.

Katie Suppa, a senior enrolled in the creative writing seminar class, said she believed this reading was a way to make her and other students feel comfortable with sharing their work.

Prior to the reading, Suppa described it as, “beautiful and amazing, and it’s probably going to break your heart a little bit but I think everybody needs that.”

Public readings are not the only activity that writers engage in. Aliu said another part of being a writer is facing rejection countless times.

Even though she was awarded the 2018 Georgia Author of the Year First Novel Prize for her novel “Brass,” along with several other awards and prizes, Aliu said although she has been rejected many times, she still continues to write.

“I’ve quit 100 times, saying I’m done, but I’ve also committed so much time to this. What will I do when I come home from work and I don’t have this?” Aliu said. “Sometimes I feel like I hate writing. Then when I go back to it and start doing it seriously again, I walk away from my morning writing and feel really great.”

Perry said writing has become such a big part of his identity.

As both a writer and a professor, Perry said he believes his background in writing has made it easier to relate to and connect with his students.

“I tell my students all the time, the only real difference between my students and me is time. All I have on them is that I’ve read more and written more. I can come in and say to my students, in all honesty, ‘I’m working on the same problems you are,’” Perry said.

Suppa said she felt that the creative writing program is always very supportive and encouraging.

“They want us to do great things,” she said.

“Language is the thing that we share as humans,” Aliu said about the importance of writing in everyday life. “Do you need a resume, a cover letter to get that job? You probably do. Are you going to write emails to people at your job? You most certainly are.”

Dickman highlighted the importance of writing for herself as well, saying fiction is the genre she leans toward.

“It helps people feel less isolated and alone and helps them feel connected to each other. It gives you a larger perspective than yourself,” Dickman said.