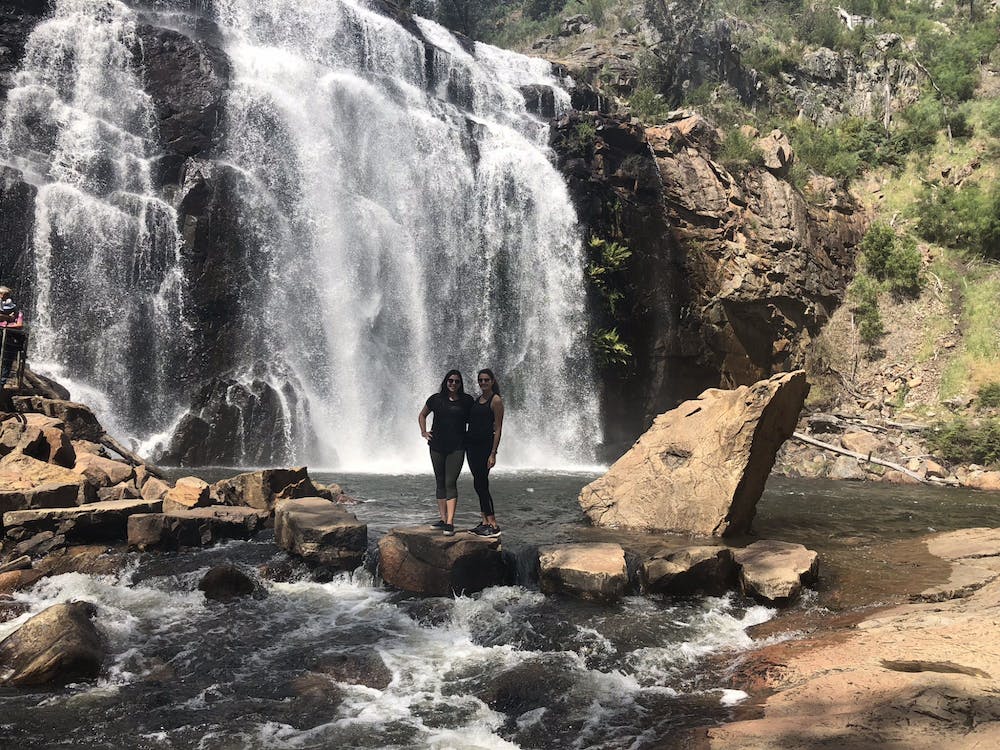 During her fall semester abroad in Australia then-junior Maria Rivera poses for a photo in front of a waterfall. Photo courtesy of Maria Rivera.

Originally from Guatemala, senior Maria Rivera moved to the U.S. to attend Elon University. While she said it was a great opportunity to live in the U.S. and experience a new culture, Rivera said she wanted to expand her abroad experience and travel even farther.

During the fall of her junior year, Rivera traveled to Australia’s Sunshine Coast for a semester.

Australia was one of the top study abroad locations in 2018-19 for international students, followed by Denmark, Spain and Germany, according to Shanna Van Beek, communications manager of global education at the Global Education Center.

“My friend from Guatemala studied abroad in Australia, and she told me about all of her experiences there,” Rivera said. “It was always on my list of places where I wanted to go.”

Despite her eagerness to go, Rivera said she experienced difficulties during the application process.

“I had a lot of trouble when I was doing my paperwork for Australia,” Rivera said. She explained one of the reasons was because the study abroad providers wanted her to have recently taken an English proficiency exam because English is not her first language. Rivera said she took an English proficiency during her senior year of high school, meaning it had already expired.

Van Beek said she agreed with Rivera’s sentiments, saying that more often than not, it is harder for international students to get a visa.

According to Van Beek, study abroad providers and organizations that facilitate study abroad “know exactly the process it takes for a U.S. student, or a student with a U.S. passport, to apply for their student visa.” However, Van Beek also said they’re not as familiar with cases of students having other nationalities.

Rivera said she loved the country and the experience of studying abroad.

“I loved it because it was a totally different experience and culture,” Rivera said. “At Elon, people are always on a fast pace, always stressed. And then in Australia, it was so much more chill.”

"At Elon, people are always on a fast pace, always stressed, and then in Australia it was so much more chill."

Rivera said she dreams of starting her own business, a goal which she said study abroad will help her achieve.

“When I was younger, my dad always said, ‘The more you travel, the more ideas you’re going to have,’” Rivera said. “When I was in Australia, I kept thinking of many different things because it was so different from here and Guatemala. And I thought, ‘Well what if I brought those different things back to Guatemala?’”

Even though Rivera said she knew she wanted to study abroad since her first year, she said Elon’s study abroad opportunities were not advertised to her before starting at Elon.

Accessibility to study abroad resources was something sophomore Duru Tasman said she noticed wasn’t mentioned when touring Elon with her basketball coach.

“Nobody mentioned anything about study abroad. I didn’t ask. They told me a lot about internships and research opportunities and how you find a job. No study abroad,” Tasman said.

Tasman is from Istanbul, Turkey, and said she originally had no plans to study abroad.

However, she said she is traveling abroad for two weeks this summer with her basketball team, though she doesn’t know where yet. Tasman also said the more she’s learned about study abroad opportunities, the more appealing they sound to her.

“For international students, it’s more of a ‘why not?’ question than for Americans, I think they should definitely do it,” Tasman said.

Tasman said you can only learn so much about another culture in the classroom, something she can attest to after her move to the U.S.

Rivera also highlighted the importance of traveling. “You open your mind and your mindset when you travel,” she said.

According to Van Beek, although Study USA programs are an option for international students, they tend to gravitate toward the study abroad program.

Tasman said she might consider a Study USA program.

“Having an internship or research is higher priority for me than studying abroad,” Tasman said.

“I think it’s really cool that Elon has made it so common and so easy for students to study abroad,” Rivera said.

“If you’re an international student and you’re considering studying abroad, come talk with us. Come talk with us early so we can figure it out,” she said.

Because of her disposition, Rivera said she decided to help other international students studying abroad in Australia navigate the process by giving them advice and encouraging them to apply.

Rivera said she highly recommends the study abroad experience to other international students.

North Carolina to move into Phase 3 of reopening Friday

North Carolina will move “cautiously” to Phase 3 of reopening beginning on Friday, Oct. 2 at 5 p.m., Gov. Roy Cooper said at a press briefing today. The Phase 3 executive order will remain in effect until Oct. 23 at 5 p.m. It comes as the number of new coronavirus cases has leveled in North Carolina after a spike in August, according to Secretary of the North Carolina Department of Health and Human Services Mandy Cohen.

Breaking down Elon University's Board of Trustees

Elon University mascot spreads spirit, with or without sports