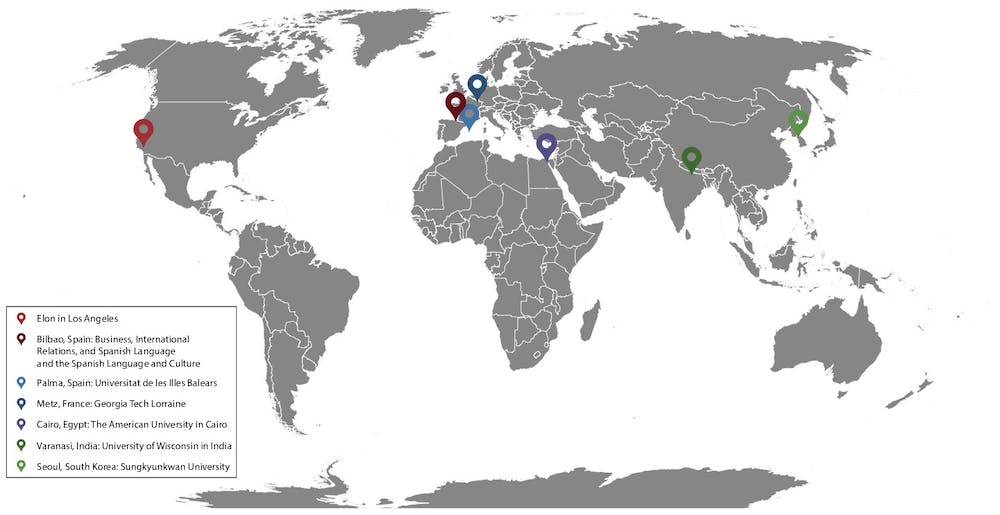 After spending a semester studying abroad in Cairo, Egypt, Shanna Van Beek ’12 said she was continuously asked, “Did you see it coming?”

The 2011 Egyptian revolution began only a couple months after her return to the U.S. A series of nationwide protests led to the deaths of more than 800 people and the resignation of President Hosni Mubarak, who had been in power for decades.

Van Beek now serves as the communications manager of global education in the Global Education Center at Elon University. She advises students studying abroad in Africa, India and the Middle East.

Nine years after her semester abroad, Van Beek is leading the reopening of the same program in partnership with the American University in Cairo.

“It’s kind of full circle,” Van Beek said. “My role having studied there helped in thinking about, well, I can speak from firsthand experience about service opportunities about classroom style, about student support resources.”

The reopening of the Egypt occurs alongside the establishment of seven other programs across four continents.

Getting to the pyramids

The six students in the 2011 cohort following Van Beek were forced to relocate their semester program to Haifa, Israel, after the Egyptian government advised evacuation from the country in response to the uprisings.

Egypt native Shereen Elgamal, lecturer in Arabic, said this was a traumatic time.

“My struggle was actually two-fold. … On a personal level, I had most of my relatives there, and my Elon students are like my own children,” Elgamal said. “It was as if you were telling me that your child is in a country where there is a revolution and there may be bloodshed.”

Elgamal said she worked with the GEC to ensure the students were safe — eight years later, she is still in contact with five of the students.

While Van Beek played an important role in reinstating Elon’s Egypt program, she said she didn’t suggest the idea.

"My Elon students are like my own children. So it was as if you are telling me that your child is in a country where there is a revolution and there may be blood shed."

“I’ve worked here for six years now, and very intentionally, I have not been the person to say, ‘We need to bring Egypt back,’” Van Beek said. “I wanted to be very careful that I wasn’t the one saying, ‘We need to bring this program back for some personal nostalgic reason.’”

According to Van Beek, Dean of Global Education Woody Pelton brought up the idea after he met with an AUC provost. He later asked for Van Beek’s and Elgamal’s input — taking into account their personal connections to the country.

“I had hoped the university would rekindle that relationship at the right moment and at the right time,” Van Beek said. She said she didn’t want her experience in the country to cloud the safety of future students.

Similarly, Elgamal said her main concern in bringing back the program was the safety of the students.

“As you can imagine, my only question was, ‘Do you think it is safe for our students to be there?’ Because I was pretty much traumatized over the six students that had to be evacuated,” Elgamal said.

The first source the GEC turns to when deciding whether or not to send students to a location is the U.S. Department of State travel advisories, Van Beek said.

The Department of State ranks each country on a scale of one to four. Level one advises travelers to “exercise normal precautions,” and four tells travelers “do not travel.”

According to university policy, students are not allowed to travel to countries falling in the four or three — “reconsider travel” — categories, unless they provide a compelling petition for reconsideration.

Currently, Egypt is a level two ranking, meaning travelers are advised to “exercise increased caution,” with a few parts of the country falling under a higher risk advisory.

Other countries under this travel advisory ranking include the United Kingdom, Spain, South Africa, India and Peru — all countries in which Elon offers global study programs.

Egypt’s advised travel ranking’s rise from level four to two prompted the GEC to reconsider the possibility of sending students to the North African country.

However, Elgamal said she still worries for the safety of the students traveling to Egypt. Though she acknowledges the risk in any country, she said she fears students could put themselves in dangerous situations.

“Maybe I have a little bit of a heightened sense of responsibility because this is my own country, and I feel, I don’t know, I probably feel more responsible,” Elgamal said. “I can’t say that I was really thrilled to know that the program is opening up again.”

A group of GEC staff members conducted a site visit to Cairo in October of 2018. The GEC went through Elon’s risk approval process “to make sure that the university was comfortable with us bringing this partnership back,” Van Beek said.

The GEC accumulated notes from the site visit, comments from peer institutions, recommendations from state departments and data from the Overseas Security Advisory Council. According to Van Beek, data from a non-governmental source such as OSAC “balances out if any part of the Department of State’s travel advisory is related to political reasons.”

The compiled documents made a 70-page report presented to the university making the case to reinstate the semester-long program, which was later approved.

From 2017 to 2019, nearly 400 students studied abroad in the continent of Africa. Morocco is currently the only country in North Africa visited by Elon students.

Next spring, junior Jewel Tillman will be one of two students participating in the Egypt program. This will also be her first time outside of the U.S.

“I’ve always wanted to go to Egypt,” Tillman said. “Being a political science major. I’m very interested in the history and the governance of Egypt.”

“Yes. I have concerns, but I feel like just exercising the necessary precautions that I already do in my life today, as a black woman, I will still be equipped to protect myself there,” Tillman said.

Each year, Elon tries to improve its 100 program global study portfolio. According to the Elon Admissions website, the university sends students to more than 50 countries. For the past 15 years, the Institute for International Education has ranked Elon No. 1 for study abroad participation.

Since Van Beek studied abroad in 2010, undergraduate student participation in study abroad has increased from 72% to 78%, according to the GEC End-of-Year Annual Report for 2018-19.

In summer 2019, the GEC conducted an “all-program audit” to ensure it was being proactive when making decisions over opening or closing global study programs.

Following the audit, Van Beek said the GEC is “taking stock of the entire portfolio to really make sure that we are meeting the needs of our students, because those needs also change.”

According to Van Beek, selecting what programs to add to the GEC’s portfolio “is driven primarily by course opportunities.”

Faculty recommendations, diversifying majors available abroad and an institutional commitment to increasing the number of international students on campus through exchange programs were all considerations in the decision to open the new programs.

Because of this, the GEC introduced programs geared toward business and engineering majors, as well as two new programs approved for Spanish majors.

“My advice to those who are traveling to Egypt or anywhere: just learn as much as possible about the country that you’re traveling to,” Elgamal said.