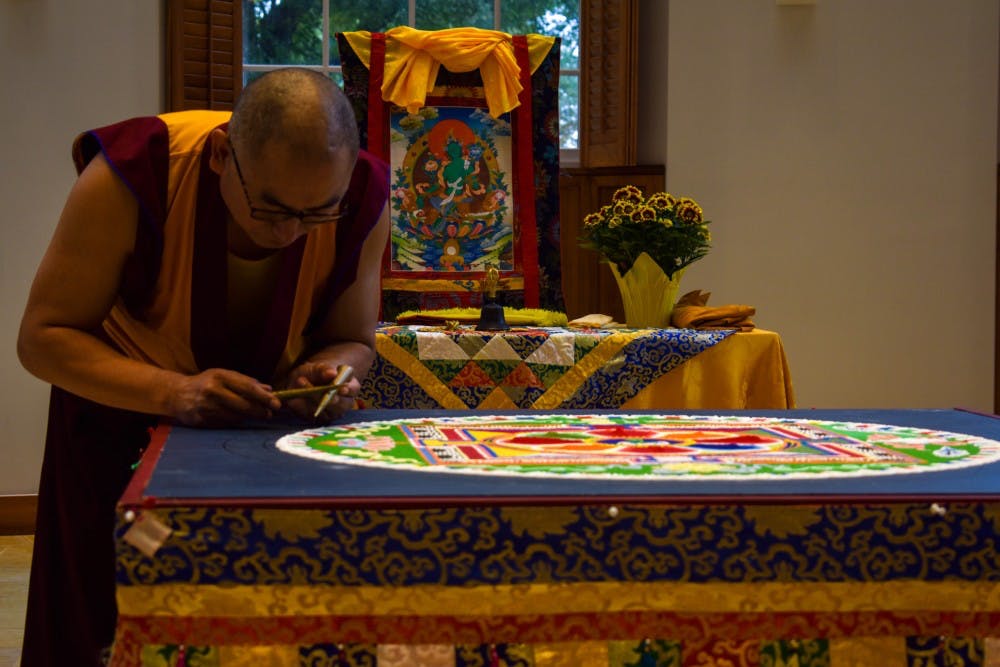 Correction — The cutlines for the pictures in this article misspelled Geshe Sangpo originally. The cutlines has been updated to fix this error. Elon News Network regrets these errors.

For the sixth year in a row, Buddhist monk Geshe Sangpo visited Elon University to construct a sand mandala for peace and healing. His visits usually last three days, and his mandala designs differ each year.

Sangpo visits the university as part of a partnership between Elon and the Kadampa Center, a community gathering space for Buddhists in Raleigh.

This year’s mandala had five colors and was made of small pieces of marble. The marble looks like sand but holds its place more firmly, making it a commonly-believed myth that the mandalas are actually made of sand.

Before beginning the mandala, the monk blessed the space with sacred chants. These centering chants helped the Geshe prepare for the process of building the mandala. Small tubes and funnels helped him place the crushed marble exactly in the design.

Sophomore Ellen Fiedler, an intern for the Truitt Center for Religious and Spiritual Life, was responsible for planning this year’s event, which took place from Oct. 23 to Oct. 25.

“I loved working alongside Geshe Sangpo and the Kadampa Center, and I look forward to incorporating what I learned in my daily life,” Fiedler said.

Fiedler said she hopes the mindfulness and meditation the mandala brings to Elon slows down the campus’ busy culture. She says Sangpo’s visit helped her center herself around something tangible, which brought positivity to her week.

Sangpo, originally from Tibet, worked for more than 20 hours to create the mandala. Throughout his stay at Elon, Fiedler said Sangpo taught students lessons of courage and persistence.

In hopes of engaging with the Tibetan monk and learning more about Buddhist culture, the interfaith interns hosted lunches and dinners with Sangpo and Strevel.

At the closing ceremony, the mandala was wiped away to represent the impermanent nature of all things. The sand was then distributed to ceremony attendees as a physical reminder of the peace the mandala brings.

“For a moment, I felt at complete peace with everything around me,” Fielder said, describing her experience brushing away the sand. Fiedler keeps her bag of sand on her desk, which she said reminds her of her experience with Sangpo every time she looks at it.

As a parting gift, Sangpo also presented Fiedler with a banner with the ancient Buddhist poem “Never Give Up.”

According to Fiedler, the sand mandala event is part of a larger initiative by the Truitt Center to bring more interfaith activities to campus. Fiedler and the other seven interns are often in charge of planning these events.

The interfaith interns are currently in the process of planning the traditional Hindu Diwali and the campus’ signature interreligious event, the Festival of Holiday Lights.

"The Sand Mandala provides the campus an opportunity to be actively invested in a spiritual ritual and practice."

“The sand mandala provides the campus an opportunity to be actively invested in a spiritual ritual and practice,” Multifaith and intern Coordinator Allison Pelyhes said. “Though we may not all be practicing Buddhists, the community surrounding and within the Truitt Center can gain something from Buddhism.”

According to the fall Registrar’s Report, the number of Buddhist students on campus has grown from five in 2005 to 17 this fall.

“Whether one is religious, nonreligious or identifies with a different spiritual world view, we can all appreciate the beauty of the sand mandala,” Pelyhes said. “The spreading of the sand also unites our community and reminds us of the importance of compassion and wisdom.”