The effect of religion on environmental sustainability 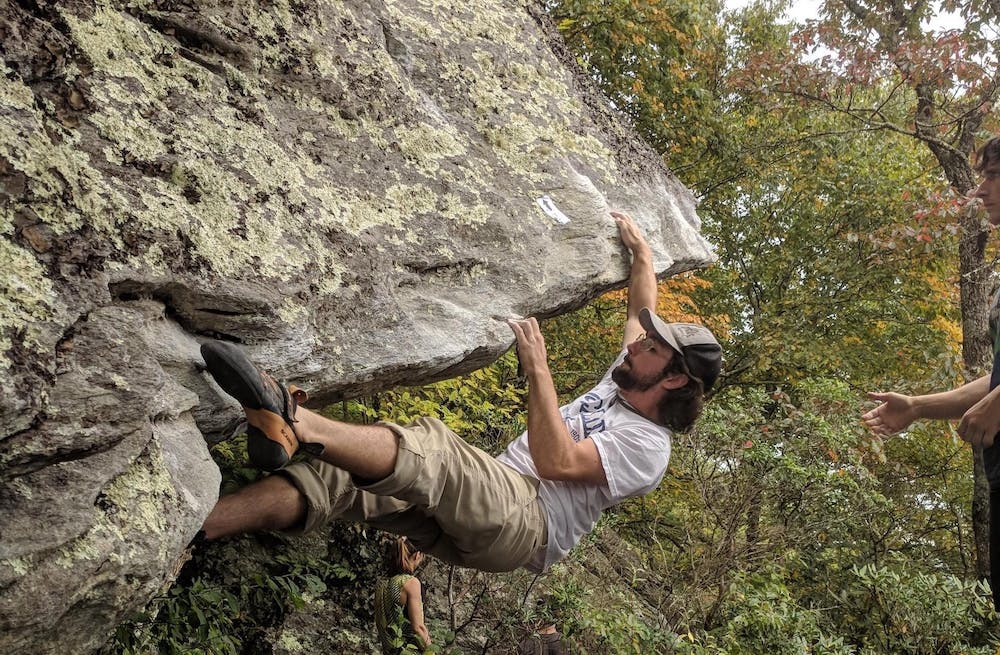 Senior Conner McCarthy is the president of Elon University’s rock-climbing. He sees his main role to be introducing people to the sport and connecting them with nature. Photo courtesy of Conner McCarthy.

Being the only Jain on campus hasn’t stopped sophomore Shreeja Shah from practicing her religion.

“It was so strange to me to think that there would not be a single person on this campus that is going to understand exactly what I am going through as a Jainist,” Shah said.

For Shah, Jainism has a distinct connection to environmentalism, ranging from food to daily actions.

“I follow a strict vegetarian diet because we strongly believe in nonviolence,” Shah said. “I won’t eat off a plate that once had meat, and when I lived in India, I wouldn’t even go to a place that served meat.”

One of the tenants of Jainism is the commitment to showing kindness to all.

“I won’t even kill a spider,” Shah said. “We believe that every creature has a life, and I was not given the right to kill that creature.”

Multifaith Coordinator Allison Pelyhes said she first converged religion and sustainability during the eight years she participated in a Presbyterian camp. Her Christian roots led her to “see God in the natural world” and has shaped the way she views and interacts with the Earth.

“I grew up knowing that God is the creator first and foremost,” Pelyhes said. “So, when the Bible says ‘love your neighbor,’ that includes that bird in the mailbox and that tree that might need a little more watering. Loving your neighbor and loving the Earth just aren’t separate at all.”

Pelyhes said her role has allowed her to intertwine her passion for the environment, her Christian beliefs and her desire to create interreligious conversations.

“In a multifaith space, sustainability is something a lot of different faiths can really rally behind,” Pelyhes said. “I think that it is one of the best causes that can unify people and is also crucial for our future and our grandkids’ futures.”

According to Pelyhes, many Christians point to Genesis 1:26, where the Bible says to “have dominion over” the Earth and animals. This has instructed Pelyhes to “live within the Earth” rather than “dominate it.”

Pelyhes said she seeks to use her role to connect with students across religions or nonreligious traditions and empower them in their environmentalist efforts.

“Part of my work at Elon is emotionally and spiritually uplifting students to do good work, whether that’s going through their own tradition or no tradition at all,” Pelyhes said. “I hope that I can uplift students who come are not feeling very hopeful and are concerned about the health of our Earth.”

Christianity has also inspired senior Conner McCarthy to connect people with the outdoors through rock climbing.

“My love for the outdoors and sustainability came because I knew that this was God’s creation and we should be respecting it,” McCarthy said. “This stemmed from the idea that we have been given this gift of a beautiful planet and we shouldn’t be bad stewards.”

"My love for the outdoors and sustainability came because I knew that this was God's creation and we should be respecting it."

Serving as the president of Elon University’s rock-climbing club, McCarthy has been able to introduce people to the sport, connecting them with nature, teaching them about environmentalism and providing them with fun outdoor experiences.

“When I first started climbing, my main focus was trying to get as strong as possible, but now my main focus is bringing in as many people as possible,” McCarthy said. “I’ve had great experiences with the community and sport, and I think other people should be able to experience that.”

Assistant Professor of Geography Sandy Marshall said he has been motivated by his faith in Islam to help students at the Burlington Masjid research the importance of environmentalism, in regards to Islamic teachings.

“There are many quotes in the Quran and Hadith that highlight environmental sustainability,” Marshall said. “The idea that people were put on the Earth to be stewards of the environment is something very important in Islam.”

Students at the Burlington Masjid, under the guidance of Marshall, will conduct research and undertake a community service project.

One of these projects is to create sustainable Ramadan meals in which reusable resources will be provided and food waste will be kept at a minimum.

“Islam is about not creating corruption on the land,” Marshall said. “Even small changes are important towards preserving the Earth.”

Over her four years at Elon, alumna Hannah Greenfader was able to merge her two passions: environmentalism and Judaism. The lasting effect of this merge is the Hazon Seal of Sustainability — given to Elon Hillel this fall.

The student-run Jewish group is the only organization in North Carolina to receive this seal, which recognizes Jewish organizations’ environmental efforts and practices with regards to suitable practices, treatment of animals and impact on climate change.

Greenfader worked alongside alumna Sydney Solomon and Associate Chaplain for Jewish Life Rabbi Sandra Lawson to apply for the seal. According to Greenfader, she’s enjoyed using her faith to impact the environment.

“It’s really special that I was able to do the work that I did,” Greenfader said. “I really love that two of the things I love so much came together so well. Judaism tells us to take care of the planet and animals and to leave the earth better than we found it.”