The ball is in women's basketball's court

After a down year, the Phoenix plans to return to form 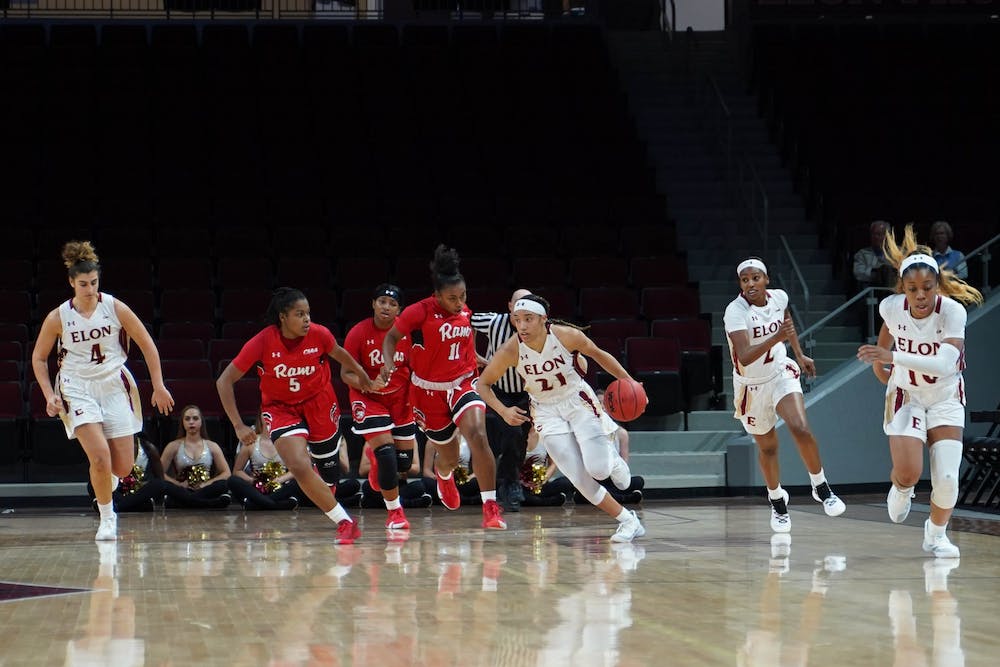 A new basketball season is upon us, and the Elon University Phoenix women’s team look to hit the ground running. The quest for a winning season and third NCAA tournament berth in four years has gotten off to a stunning start for North Carolina coaching legend Charlotte Smith. This 2019-2020 season started with a match-up against Western Carolina University and a thrilling overtime victory against Appalachian State University.

Smith is in her ninth year of coaching the Phoenix, despite speculation in the offseason that she would leave Elon for her alma mater, the University of North Carolina Tar Heels, to succeed the recently retired coaching legend Sylvia Hatchell. Smith played for Hatchell from 1991-1995. Smith hit the game-winning three-pointer for the Tar Heels against Louisiana Tech University to net their only championship to date.

Smith has led the Elon program to a Women’s Basketball Invitational Tournament and two Women’s National Invitational Tournament appearances and back-to-back NCAA tournament appearances in 2017 and 2018. She said she looks to return to the NCAA tournament with a talented roster that is young and still continuing to grow. The roster is stacked with young talent for the Phoenix, as it doesn’t have any seniors on the squad.

Redshirt junior guard Jada Graves looks to break out this season for Elon, as she only played one game last season for the Phoenix due to a torn ACL. Sophomore guard Brie Perpignan will run a very fast-paced game at the point, as Elon will excel in the run game this season.

The freshman class looks to add depth and balance to the roster. The three-person class brings a guard and two forwards to a young Phoenix squad. Guard Vanessa Taylor is from Sweden, where she played basketball at Hagagymnasiet high school and debuted for the Swedish women’s professional league at age 15.

Forward Maya Johnson hails from Southeast Raleigh High School, where she helped the team make three state championship appearances. Forward Teylah Saunders, from Pikesville High School in Pikesville, Maryland, helped lead her team to a 1-A state championship in the 2018-19 season, and was selected for the all-state second team as a senior. She was named the defensive player of the year for Pikesville during her junior season and the team’s most valuable player in 2017.

The Phoenix picked up right where it left off with their defensive tenacity, as well as a balanced offensive attack, scoring in the paint along with a steady line of shots from the perimeter by talented forwards.

The Phoenix started the regular season strong with a strong victory over the Western Carolina Catamounts 68-24 in Schar Center. The team dominated in multiple facets, outscoring WCU 26 to 12 in the paint, 25 to 8 in points off turnovers and 33 to 5 in points off the bench. Jada Graves led the balanced scoring effort for the Phoenix with 12 points. The Phoenix dominated the boards with 45 rebounds.

Elon followed with a much more competitive game against Appalachian State. The result was a thrilling narrow victory by a one-point margin in overtime with a score of 67 to 66.

Junior forward Jaylin Powell starred for the Phoenix with 19 points, going 7 for 21 from the field with two three pointers. Powell also secured the deciding point with a free throw.

The Phoenix will be challenged this season with a very tough schedule.

They draw three Atlantic Coast Conference programs in Wake Forest University, UNC and North Carolina State University, as well as tough opponents in the University of Nevada Las Vegas Lady Rebel Roundup in Las Vegas at the end of November.

The Phoenix will also take on Coastal Carolina University out of the Sun Belt Conference in Myrtle Beach, South Carolina.

The CAA slate starts with a bang against defending champion Towson University, where the Phoenix lost a heartbreaker 59 to 58 last season in late January.

Elon looks for a bounce-back win against the Hofstra University Pride, who knocked them out of the CAA tournament last season, beating the Phoenix 77 to 75 on Jan. 19.