Positivity and pride during homecoming weekend

More than 2,500 alumni visit campus to celebrate renions and donations 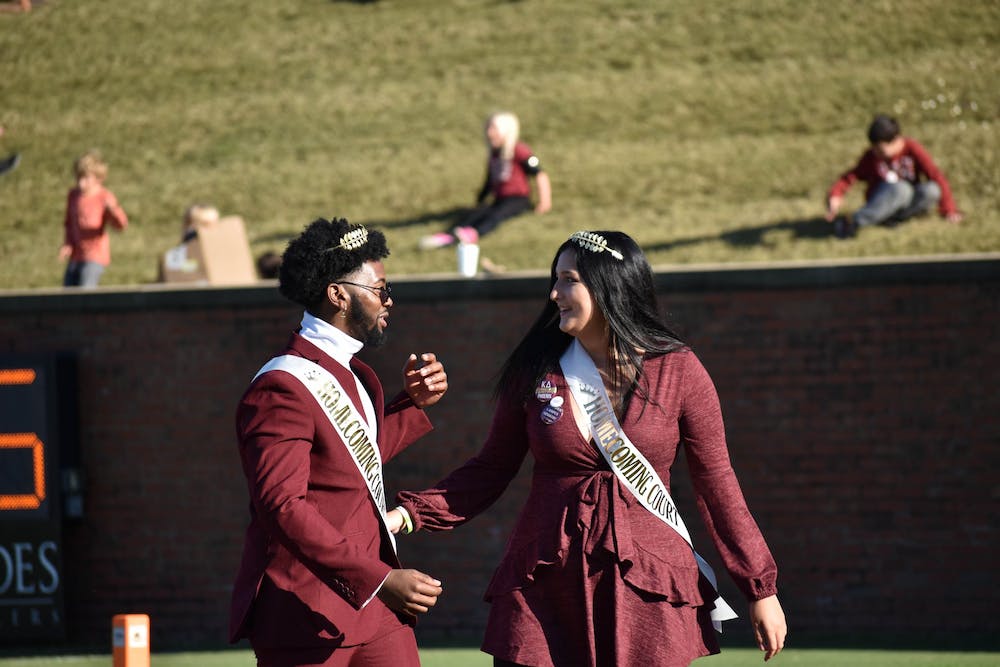 Homecoming Weekend marks the yearly occasion on which graduates of Elon University return to campus. As the school expands, more and more alumni make the trip to North Carolina each fall, intrigued by the growing campus and the events planned by the school.

This weekend, Mary Chayse Haithcock, coordinator of alumni engagement, said more than 2,500 alumni returned to campus — consistent with the past few years — to take part in Homecoming festivities.

“Homecoming exists to build the relationship that alumni keep with Elon after they graduate,” Thompson said.

The tradition of Homecoming in the U.S. dates back to the 1920s. According to the Traditions Council, Elon’s Homecoming history started in the early 20th century as an annual fall event held in October or November called “Homecoming Days.”

"HOMECOMING IS A WAY for alumni to build connection and sense of pride with your university, that makes you want to give back to help build the school stronger."

Brian Feeley, senior director of alumni engagement and annual giving, who helped organize more than 80 events over Homecoming Weekend, said the reunion is a time for alumni, students, faculty and staff to reconnect and come together as a family.

“There’s not one or two events; there’s dozens of dozens of events,” Feeley said.

Some of the major events this weekend were the Rock the Block party on Friday, the Brick Run/Walk early Saturday and the All Alumni Tailgate and football game on Saturday.

Feeley highlighted the block party, which included food trucks, live music and fireworks, as a great celebratory kickoff to the weekend.

The newest event added to the Homecoming schedule this year was the Saturday morning Namast’ay at Elon, a morning yoga session taught by alumna Samantha Murray ’15.

Saturday continued with the All Alumni Tailgate, which Feeley described as a festive environment.

One of the weekend’s main events was the Homecoming Concert, featuring rapper T-Pain, which was sponsored by the Student Union Board.

SUB staff members — President Ryan O’Leary, Performance Chair Erin Eady and Special Events Chair Emily Sanderson — were unavailable for comment over email and social media regarding the attendance and profits of the concert.

According to Feeley, “several hundred tickets” were sold to alumni.

“Homecoming is a way for alumni to build connection and sense of pride with your university. That makes you want to give back to help build the school stronger,” Thompson said.

The oldest class to visit the campus for Homecoming was the class of 1969 — marking their 50th reunion and status as Golden Alumni. The reward for attaining this status is a pin and a medallion.

Thompson said Homecoming is an important tradition to help both alumni and students stay connected to Elon and help strengthen the institution.

“Some alumni haven’t been back in 20, sometimes even 50 years, and they come back and learn that, even though every building may not look the same as when they were there, they learn that it’s still the same Elon, and students are still getting a great education,” Thompson said.

is the amount of money raised by 2,367 donors from the reunionclasses since the beginning of the year.

Announced over Homecoming Weekend was the amount of money raised by the classes celebrating reunions since the start of the year — totaling $1,172,052.74 from 2,367 donors.

According to Thompson, where the money goes is decided by the donor.

“This year, it seemed to be a palpable, positive feeling throughout the weekend. Everybody was in such a celebratory mood,” Feeley said.

Seeing alumni run toward people they haven’t seen in years, people they didn’t know were coming, giving hugs to one another and reconnecting with Elon were some of Feeley’s favorite things about Homecoming.

Even with such great success, Elon doesn’t stop trying to improve, Feeley said.