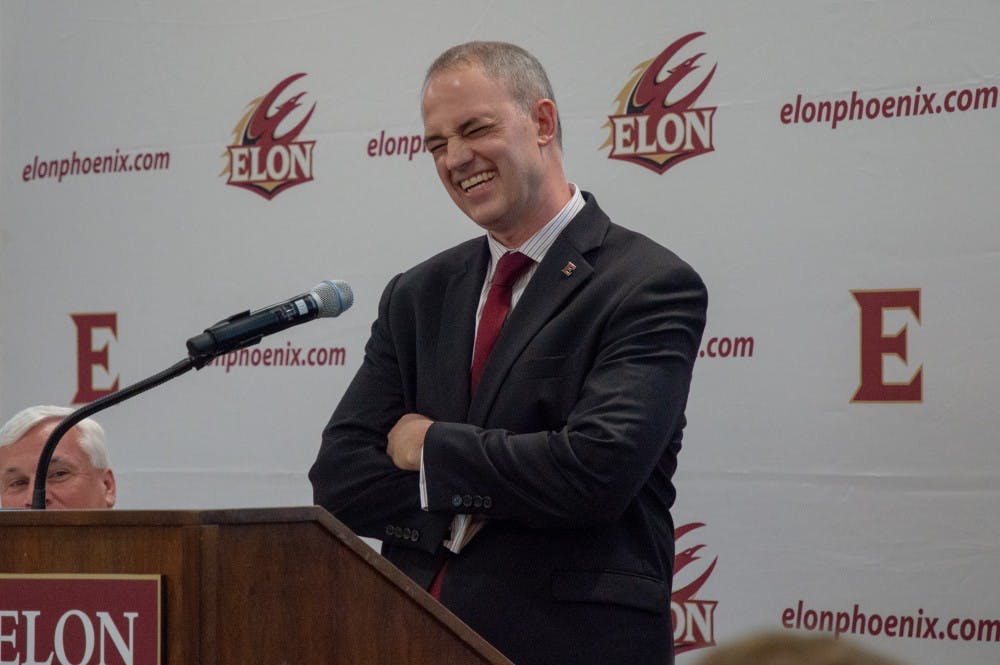 On some Thursday afternoons the men’s basketball team is at work in Schar Center practicing drills and playing scrimmage games under the watchful eyes of head coach Mike Schrage and his staff.

The challenge for many student athletes is fulfilling their responsibilities as students following long, exhausting days spent in the gym. What is not often shown on game day, when players suit up in their maroon and gold apparel, is the work that they put forward in the classroom.

The effort student athletes put forth has resulted in Elon men’s basketball receiving a 100% rating in the NCAA Graduation Success Rate scale for the 2018-19 season. The men’s basketball team excelled in staying on top of their coursework and were expected to graduate within the six-year timeline provided by the NCAA. The GSR does not account for athletes who transfer from their original school.

Although this ranking refers to last season when the Phoenix was under the direction of Matt Matheny, Schrage continues to embrace the challenging curriculum that Elon offers and he said will strive to make academics a priority during his tenure.

“I respect the whole student athlete experience. They’re students first, and I commend the last staff and Elon overall just [with] the success that all the programs have had here,” Schrage said. “We definitely plan to continue that.”

The GSR rating indicates that Elon student athletes are among the best when it comes to their success in the classroom. Last year, Elon athletic department’s overall GSR rating was a 96%, the highest score in the Colonial Athletic Association.

Athletes have to stay up to date with their assignments and sometimes even be weeks ahead when accounting for the rigor of their season. Junior and forward Simon Wright acknowledges the struggles of balancing athletics and academics, saying the key is time management.

“I like to try to get all my schoolwork done before practice because once practice is over, I’m kind of out of it,” Wright said. “If I have a 9:25, I might wake up at 7:30 and get my homework done for the next couple days in that window.”

Received a 96% in graduation success, the highest overall score in the Colonial Athletic Association

When it comes to making time for social activities with his teammates and other friends, Wright said getting his work done beforehand is crucial.

“You’re with your friends, you live with the teammates and stuff, so you’re not going to be able to go home and hang out with them if your stuff’s not done,” Wright said.

The stress of keeping up with academics and being on the road for away games is also a tall order for the players to contend with. Bus trips, commercial plane rides and various overnight stays at hotels provide a challenging environment for students to complete their work.

“I mean, you’re always in a different hotel. You’ve got to find some quiet space,” Wright said.

The travel schedule for the first half of the season is a grueling one for the Phoenix, as it follows a pair of season opening home games with road trips to face Georgia Tech, University of Michigan and UNC Chapel Hill.

Schrage said he understands the importance of keeping up with work on the road but that road trips will help prepare his team for the grind of the NCAA slate and make sure players keep up their grades. Schrage said helping to make sure the team stays on top of deadlines this season is instrumental to their success.

“Things are ramping up on the court. We’re starting to travel more; the demands of the season are upon us. And as you guys know, from Thanksgiving to Christmas, it’s no joke,” Schrage said. “You’ve just got to get the job done the right way. And so we’re really messaging to our guys all the time how important is to stay on top of it.”

Wright said Assistant Director of Athletics for Academic Support Services Cayce Crenshaw helps players tackle their schoolwork. She serves as a tutor for the team both at home and occasionally on the road. Wright said he wasn’t always as interested in academics as he is now, but explains that Crenshaw motivates him.

“Coming in, I didn’t really care about school that much. But after working with Cayce, I’ve actually got self-motivated now,” Wright said.

is Elon University's rating in the NCAA men's basketball Graduation Student Rate scale for their 2018-2019 season.

For freshman Hunter McIntosh, the experience looks a little different. His first season may provide many learning opportunities about the experience of being a collegiate athlete.

However, he said his high school prepared him for the transition, and he is ready for the challenge.

“My high school prepared me a lot. Right now, I’m probably on pace to graduate a year or so early,” McIntosh said.

McIntosh said he recognizes Elon’s challenging academics and said it was one of the reasons he committed.

“One of the reasons I picked here … was academic success and just kind of the history they’ve had here as well,” he said.

McIntosh said for most of the players, sharing similar classes means their competitive spirit translates into the classroom.

“I think we’re just building right now just a culture and standard of excellence, so it kind of bleeds on and off the court,” McIntosh said.

Schrage said he is beginning to implement his ideals and teachings in his coaching and has already begun forming strong bonds with his players.

"live in the moment. LOVE IT. CHERISH EVERY SECOND YOU HAVE HERE AND GIVE IT YOUR MOST."

“I’m lucky to be in a profession of teaching and coaching where it’s tangible. Every day you feel like you’re making a difference,” Schrage said.

As he fosters his players’ success both on and off the court, Schrage offers words of advice for every college student.

“Live in the moment. Love it. Cherish every second that you have, and give it your most. Take advantage of these relationships you get a chance to build and these four years while you’re here,” Schrage said.

While the majority of focus on the basketball team comes from its play on the court, the players’ commitment to their studies is commendable.

Elon men’s basketball looks to continue its streak of high academic performance as it begins a new era and charts a path for the program in the 2019-20 season.