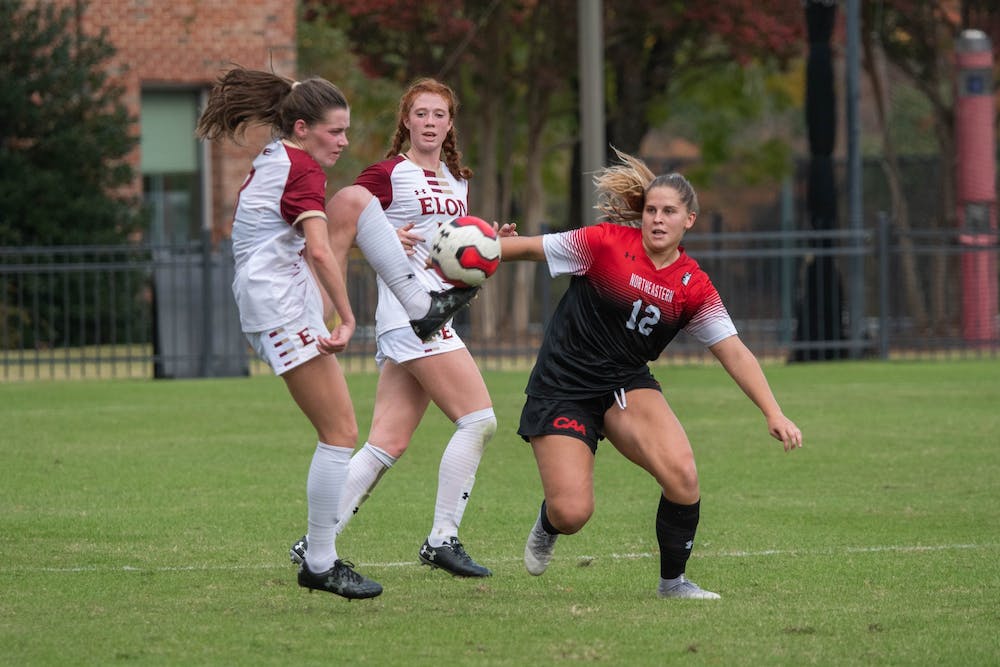 Though Elon University women’s soccer team has spent five years in the Colonial Athletic Association, the Phoenix has not had a champion come from the soccer pitch. This is the first year the door is open.

After an impressive regular season, the women’s soccer team finds itself in an unfamiliar position: the CAA playoffs. Though the Phoenix has never been in this position, it still likes its chances.

is the current record for the Elon women's soccer team in the regular season.

“I think that [out of] all the teams this year, we have the most to prove. And we’re really excited to do that and show everyone that it’s not just Elon,” said senior forward Taylor Paradoski.

The 2019 season has etched the women’s soccer team into the history books. The team improved from a record of 3-10-4 last year to a record of 11-5-2. This was the best record the team has posted since Elon joined the CAA in 2014. Along with the history-making cumulative record, the team also had an eight-game home undefeated streak that spanned from Sept. 8 to Oct. 22. This was the team’s longest home winning streak since 2013, when the Phoenix won 10 straight home matches while competing in the Southern Conference.

Senior forward Breanna Mitchell was part of the team that struggled to win three games in 2018. She said in this record-breaking year, the senior leaders have set a standard that will live on past their graduation.

“It’s great that we’re part of the team that made it to playoffs, so it’s nice to say we were the first class to make it,” Mitchell said. “It’s inspiring to look up to.”

The success of the team now has not only been a source of pride for current teammates but for former teammates as well.

“It’s also nice to see the alumni reaching back out to us saying good job like, ‘wish we could have done that,’ and stuff, so it’s kind of nice just hearing their feedback,” Mitchell said.

Elon has outscored opponents 46-29 in 18 games played. The leaders of this offensive production have been junior midfielder/forward Carson Jones. Jones has played in all 18 games for the Phoenix and started 16 of them. In this time, Jones tallied nine goals and one assist for a team high of 19 points. Jones was also named CAA Player of the Week twice this year.

The Phoenix team, featuring 10 freshman players, saw significant development throughout the season. Most notably was standout freshman forward Jessica Carrieri who only started two games yet still made her presence known. Carrieri was second only to Jones in points, scoring 18 during the season. Carrieri exploded onto the scene in late September as the Phoenix entered conference play.

Head coach Neil Payne said he is happy with the development of young players like Carrieri.

“I’m really pleased with the freshman class, if anything, just the mentality. That’s what it needs to look like moving forward,” Payne said. “They don’t complain about anything. Very positive. They work hard every day on making the team better.”

Behind the high-powered Phoenix offense is another standout Phoenix newcomer: freshman goalkeeper Katrin Hauksdottir. Hauksdottir started and played all but one game this season. The 5-8 goalie from Hafnarfjordur, Iceland, stopped 63 shots for a save percentage of 64.6%. Hauksdottir also posted two shutouts in her first year as a Phoenix.

The Elon women’s soccer (11-5-2) team fell to the Northeastern Huskies (8-9-1) 4-0 in the final regular season game of this year. With the loss, both Elon and Northeastern finished CAA conference play with records of 5-3-1, an even 16 points each.

But with the Oct. 27 loss, Elon slid to the 5th seed and Northeastern improved to the 4th seed. Both teams will have a rematch on Friday, Nov. 1 in the opening round of the CAA playoffs. It will be Elon’s first CAA postseason appearance in school history. Only six teams make the CAA playoffs, and Elon will have to defeat both Northeastern and number one ranked Hofstra in order to play in the championship.

Elon women’s soccer, a team that struggled to achieve a winning season, has changed its culture. In just his second season, Payne has set new expectations for the program and his players. Payne said although making the playoffs is a great accomplishment, the team should still aim higher.

“To achieve that, this group of players needs applauding for that because nobody’s been able to do it before,” Payne said. “We’ve got to not be just OK with that. We’ve got to get excited this week.”

Veterans on the team, who have been with the team for its highs and its lows, are excited for the next step. Mitchell and Paradoski make up two of the seven seniors on this year’s roster. When they were freshmen, they finished 7-9-3. Now they’re competing for a championship.

“I think it’s awesome — the amount of team records we’ve beaten over this whole season. It’s just exciting, especially for Breanna and I as seniors taking that on,” Paradoski said.