Elon Jazz Ensemble perform their first concert of the year 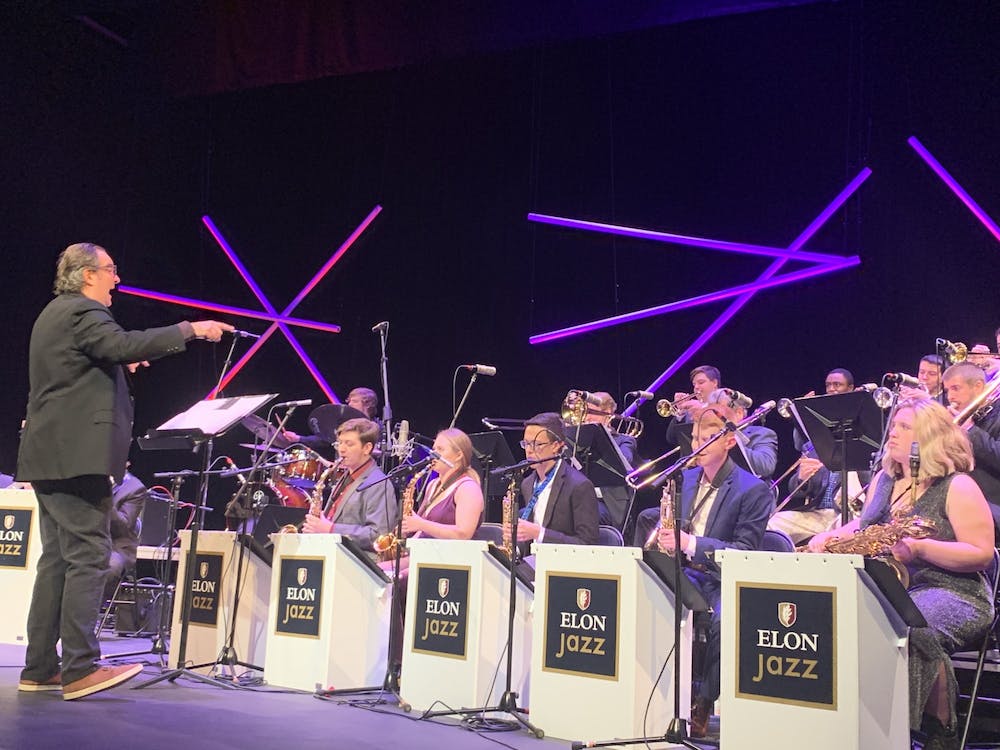 
Director Rusty Smith leads the ensemble in "From A to Z" during the Elon Jazz Ensemble concert on Nov. 16.

A luminous, vivid stage isn't the setting that most people envision for a Jazz concert. While the beaming lights of the McCrary Theatre juxtapose the dark, smoky atmosphere of a classical Jazz club, the music sounds just as sweet.

The Elon University Jazz Ensemble performed its first show of the year for a full crowd on Saturday evening. The students of the group have been preparing for this show since the first day of class. For a few members of the band, this is their first performance of the year. Director of the group, Rusty Smith, is pleased with how far they’ve come.

“We have a lot of new faces in the band this semester and I’m really proud of their efforts,” Smith said.

The ensemble walked out under the glaring lights and the brilliant, beautiful stage decorations, their instruments shining with the golden tint of brass. The brass section, arranged in classic big band fashion, lined up in rows stage left. Opposite them, the rhythm section, composed of piano, drums, guitar and bass, completed the satisfying visuals of the concert.

While the show opened with a rough start, the group quickly found and ran with their rhythm. The first solo of the night, performed by Ben Hawkins, set the tone just right with his upbeat trumpet tunes on “Soul Proprietor.” Guest vocalist Kennedy Boston put a new spin on a 1940s classic with her rendition of “Why Don’t You Do Right?” by Joe McCoy. The highlight of the night however was Anne Williams’ impressive feat during “From A to Z,” when she proceeded to play both the saxophone and the flute in the same song.

The work doesn’t stop after this for the group, however. Their next performance will be at the Elon Jazz Festival on Feb. 21 and 22. They’ll be performing alongside Jazz professionals such as The Brubeck Brothers, Phillip Whack, and Andy Page.