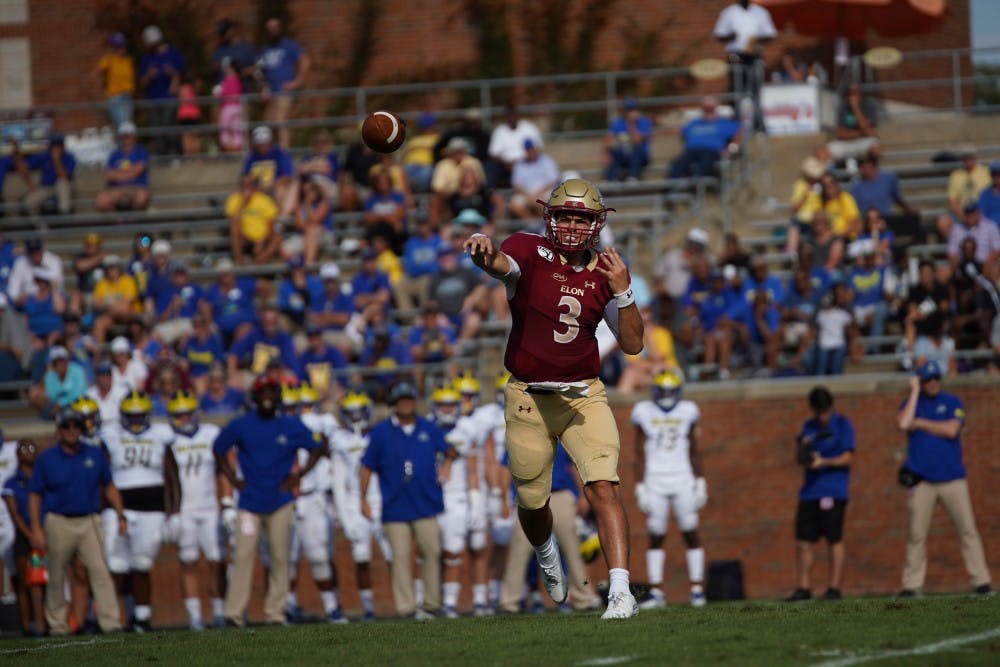 For the first time in Phoenix history, this year’s homecoming game against the Tribe went to four regular overtimes, and one round of a two-point shootout, stretching out to an hour of overtime play. In the end, the Phoenix lost to the Tribe 31-29.

In the strangest turn of events, the Phoenix fell to a William and Mary team who missed five field goals and an extra point in regulation, and two field goal attempts in overtime.

In total, that is 22 points that the Tribe threw away.

To make it even stranger, sophomore kicker Skylar Davis missed two field goals in overtime and one more in regulation.

“At the end of the day, they made more plays than us,” junior quarterback Davis Cheek said. “We got to practice harder and got to keep playing until the end until people tell us that we’re not allowed to.”

The Tribe picked up its first CAA win of the season with this game, and you can’t help but sit and wonder what happened to make the Phoenix who rolled past their last two opponents, fall short in this game.

The first quarter was controlled by the William and Mary defense. The Phoenix struggled to get the ball down the field for the majority of the quarter. The Tribe broke through first with a field goal to go up 3-0.

The second quarter saw much more action than the first. Redshirt freshman quarterback Joey Baughman ran in a one-yard touchdown to give the Phoenix a 7-3 lead to start out the second quarter. Baughman’s touchdown made it the third straight game he ran the ball for a touchdown.

With two minutes remaining in the half, the Tribe tried to work its way down the field to try to put more points on the board before going into half. They got all the way to the Elon 32 yard line before Tribe senior kicker Kris Hooper attempted a 49 yard field goal, which ended in the first of many missed field goals.

Sophomore kicker Jake Johnston missed his first field goal of the game in the third quarter, allowing the Phoenix to reclaim the ball but did little with it. Redshirt junior punter Hunter Stephenson entered the field to punt the ball away, but was blocked by the Tribe. As luck would have it, the ball actually traveled forward from the block and was recovered by sophomore defensive back Marcus Hillman. The Phoenix turned their luck into a scoring play to tie up the game 17-17 with help from sophomore kicker Skyler Davis, who completed a 38-yard field goal.

William and Mary drove down the field to get in good field goal position, putting sophomore kicker Jake Johnston back in for a 23-yard field goal attempt. The kick that would’ve put the Phoenix behind by six, therefore forcing them to have to score a touchdown to tie or win the game, was kicked wide right, keeping the game at 23-20 Tribe favor.

On their next possession, William and Mary rushed to get down the field, but sloppy play decisions and executions allowed them to make it only to the Elon 32-yard line. Hooper was put in over Johnston, but the result remained the same; with a no good sign by the referees.

Cheek went down on a knee to end regulation, and the game entered what would be an hour of overtime play.

According to this year’s new college rules, one a game reaches its third overtime, teams must attempt two point conversions after possible touchdowns, a rule which didn’t favor either team.

In the third overtime, Tribe sophomore running back Owen Wright pounded in a touchdown to get the scoring started, but William and Mary could not convert the extra point.

Elon responded with a four-yard touchdown pass from Cheek to senior tight end Matt Foster. Elon also could not convert the two-point attempt.

To add to the madness of the game, in the fourth overtime William and Mary put in their punter, freshman George Eberle, to attempt a 37-yarder which sailed wide life.

It seemed only fair then for Davis, who has never missed three field goals in his collegiate career, to go in and miss the field goal that would’ve won it for the Phoenix.

“At that point, I feel like we had been playing on our last leg for a while, and we were used to having our backs against the wall, we were used to the next  play being our last at any point,” sophomore defensive back Cole Coleman said. “It only did good for our confidence going into each and every period, so by the time you know, second, third, overtime, we're ready for it.”

Another addition to this year’s rules is what could best be described as a “two-point conversion shootout” once play enters the fifth overtime. The teams moved in even closer to two-point conversion distance, and would keep going until one team converted and one team didn’t.

William and Mary was able to find Wright in the first round, moving the score to 31-29.

Elon’s turn would be the one to end the game. Cheek was able to find senior wide receiver Cole Taylor, but was ruled incomplete by the closest referee. After review, the call was confirmed, and the game was over.

“This is gonna sting, it's gonna suck,” Cheek said. “Come Monday, it's over with, you can’t do anything about it.”

The Phoenix will be back home next week for senior day against University of Maine Black Bears.