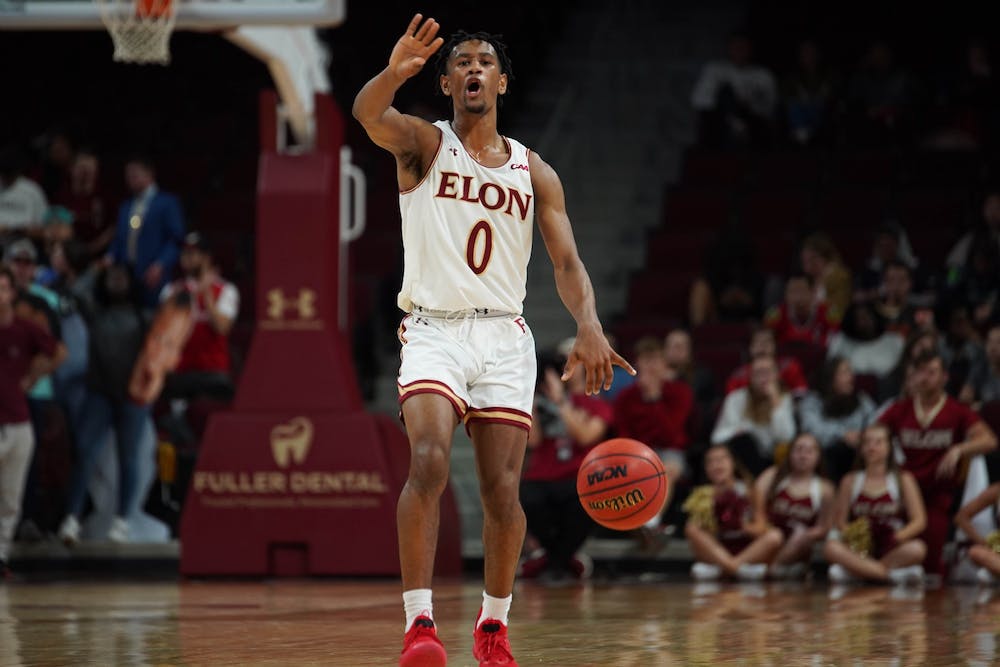 The Mike Schrage era began in Schar Center as the men’s basketball team (1-0) defeated the Mars Hill University Mountain Lions (0-1) 90-84 in its opening game of the 2019-20 regular season.

Coming off an impressive tenure of assistant coaching stops at Stanford, Butler and Ohio State, Schrage is looking to make his mark at Elon in his first head coaching role.

The first half was a close matchup between the Mountain Lions and Phoenix with both teams trading transition buckets and tenacious defense.

In the opening half freshman guard Hunter McIntosh and grad-transfer forward Marcus Sheffield lead the Phoenix scoring effort giving Elon a 48-36 lead at halftime. McIntosh led the Phoenix in scoring with 11 points. Sheffield followed with nine.

Freshman forward Hunter Woods took flight for the Phoenix, crashing the boards for six rebounds and five points. Woods knows that he and his classmates will be an integral part of the team’s production despite their young age.

“We're gritty, we're gonna grind it out, you know coach really trusts and believes in us and down the stretch, he relies on us freshman to play big minutes and we look forward to that,” Woods said.

With eight minutes left, the Mountain Lions cut the lead to three, putting the Phoenix in desperation mode. Sheffield hoped to provide the spark for the Phoenix, finding an open lane and slamming home an emphatic dunk. McIntosh followed with a smooth corner three on the next Phoenix possession to put the Phoenix up by 10 with just over six and a half minutes left.

Mars Hill’s late-game fouling to stop the clock turned in favor of the Phoenix. Sheffield nailed four pivotal free throws to seal the game for the Phoenix, as Mars Hill attempted to climb out of a four-point hole with nine seconds left. The Mountain Lions couldn’t convert with the game on the line, and the Phoenix prevailed with the six-point win.

Even though they escaped with the win, Schrage knows that his team will need to continue to improve as the season moves on.

“I want them to play with a good pace and good energy but also having our legs under us and being strong with the ball,” Schrage said.

The Phoenix return to Schar Center when they take on Milligan College Nov. 8.