Elon Cheerleading raises each other up

Elon University’s Cheer team support the Phoenix, and each other, on and off the field 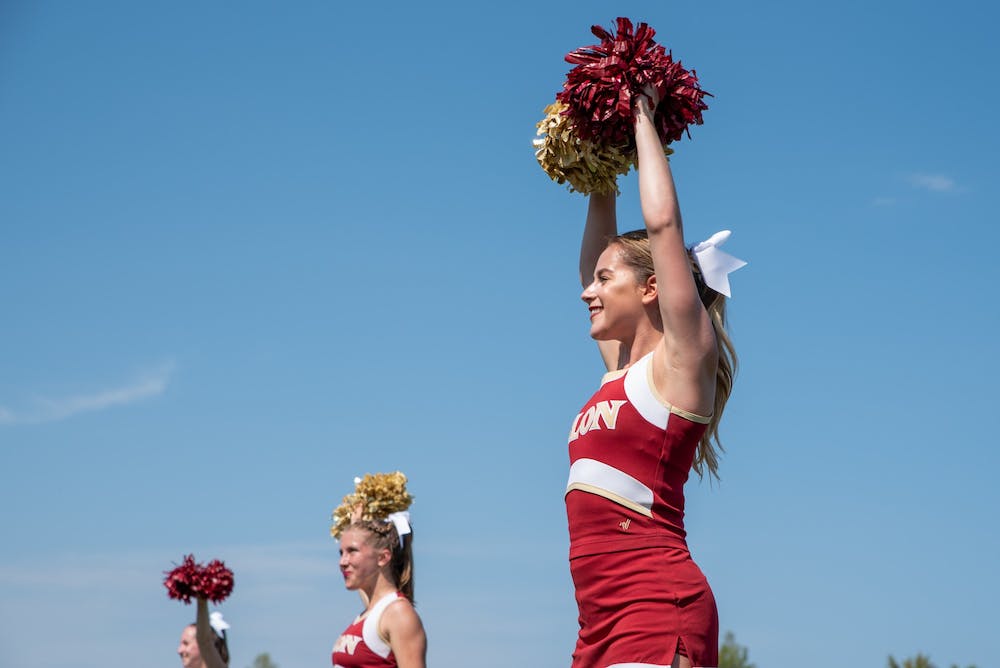 Photo by Zach Ohmann | Elon News Network
Members of the Elon cheer team fly high during a football game at Rhodes Stadium in 2018.

While they may not be the center of attention on game day, Rhodes Stadium wouldn’t be the same without the Fire of the Carolinas marching band, the dance team or the cheer team.

Elon has two cheer teams, a female one and a co-ed one. When senior Whitney Miller, co-captain of the female cheer team, stepped on campus as a prospective student at Rising Phoenix Weekend, she said she was approached with an offer that changed her collegiate path.

The Elon University cheer team will be on the sidelines supporting the Phoenix against the College of William and Mary on Saturday, Nov. 2 at 2 p.m.

“When they pulled me aside at Rising Phoenix Weekend and said, ‘Oh, you should come to tryouts. We think you’d really like it. You should just give it a try,’ I was very apprehensive,” Miller said. “I think one of the best decisions of my career was stepping into that tryout gym. From the moment they told me I made the team, I haven’t looked back.”

For junior Zachary Wallace, co-captain of the Elon co-ed cheer team, joining the team was a continuation of the previous decade he spent as a cheerleader.

Wallace was an athlete with All Star Cheerleading, a competitive international gym, for nine years before taking a coaching job at the gym. He is now going into his second year as a coach there.

Miller and Wallace said Elon’s cheer team is both similar and different from their high school teams.

“In high school, it was just more of something I did for fun, something I did to be social,” Wallace said. “Here, I feel like when we’re out on the football field or the basketball court, we are representing Elon University.”

The cheer team members are recognized as student athletes and receive benefits as a result.

But unlike the majority of the sports on campus, their season lasts six or seven months.

“We get here for preseason before school begins just like many of the other athletes, and then our season is all of fall, all of J-Term and into spring because we have both football and basketball that we cheer for,” Miller said.

Game day performances are not all the team does. They have practice every Tuesday and Thursday for two to three hours. Outside of practice time, team members are expected to do their own workouts.

“After those two or three hours, we’ll work on that stunt that we’ve really been wanting to get or a tumbling pass and just really strive to be the best that we can be,” Wallace said.

Miller and Wallace said at the end of the day, it’s about the progression of the team and becoming the best versions of themselves.

“We want to constantly work toward being better and achieving those goals and then setting new goals for ourselves,” Miller said. “If we’re doing our jobs right, no one will be able to notice that there’s a ton of work behind the scenes.”

Miller said before coming to Elon, she didn’t fully understand the cliché of a team being a family.

She said that her teams now have formed a bond between the countless hours they spend practicing, eating dinner and preparing for game days.

Miller said this all helps develop the most important aspect of cheerleading: trust.

“Trust is everything,” Miller said. “You need to be able to show up. You need that trust in yourself to show up and give 110% every single day.”

According to Miller, that trust is seen before the start of each game day during what the team calls “pregame.”

During this time, the band, dance team and cheerleaders spread out all along the field to greet the football team as they enter the field.

“I actually do get butterflies sometimes before pregame,” Wallace said. “Sometimes I’m like, ‘OK, everyone’s watching all of us. I can’t make a mistake here,’ but it’s just so much fun that I just forget all about it the minute the music starts playing.”

"Every single team member plays such an essential part. We're one of the only sports where people aren't benched or there isn't a second string, a third string."

Wallace said his favorite moment of his cheer career so far was when a crowd at a basketball game encouraged him to do backflips.

Wallace said he did about four flips, which made him dizzy by the end of it, but he said he enjoyed it.

Miller also said she is close to the women’s basketball team and is their number one fan.

“They are so awesome,” Miller said. “To be able to be so immersed in that environment with all the fans going nuts and then all the players giving it their all and feel like you’re helping them accomplish that title, it’s really great to just be there and be in the moment.”

With just a few football games left in the season for Miller, Wallace and the rest of the team, Miller has started looking back on her athletic career with nostalgia.

But she said she will cherish the uniqueness of the Elon cheer team.

“Every single team member plays such an essential part. We’re one of the only sports where people aren’t benched or there isn’t a second string, a third string. Everyone’s there 100% every single game. You are all on all the time,” Miller said. “I think it’s a really special dynamic, where you’re constantly pushed to be your best self and make it work no matter what.”