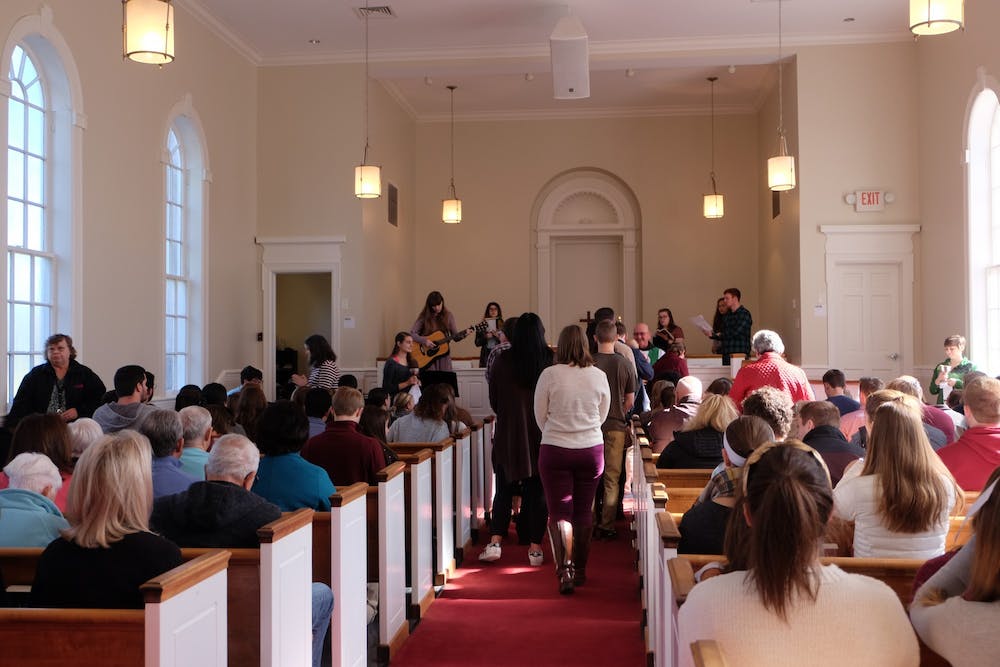 Catholic Campus Ministry serves as a student organization and resource for Catholic students on campus.

According to the 2019 Fall Registrar’s Report, 1,721 Elon undergraduates identify as Catholic — nearly 30% of the student population — making it the largest religious group on campus.

The organization is currently led by Father Peter Tremblay, or “FP” as students call him. It is also organized by “servant leaders” who take on roles such as peer ministry coordinator and president.

Burke said she started going to CCM events her first year, but became a “servant leader” during her junior year.

“I knew how much [CCM] had grown under Father Gerry [Waterman],” Burke said. “When I got back from abroad, Father Peter was the chaplain, and I was really excited to be part of the ministry under his leadership.”

Waterman was in charge of CCM for 11 years starting in 2006, according to Sarah McKenna Codd ’11.

Codd was the peer ministry coordinator after she graduated, which allowed her to stay on campus. Her friend during her time in CCM, Tracy Schell McCool ’11, stayed in Burlington as well.

“I’m an Elon community member, so I’ve gotten to see [CCM] as it has grown,” McCool said. “And I like bringing my kids back home and going to mass,” she said as she looked at her young children, who accompanied her to the reunion. “I like that they have more mass times now. That’s been a real blessing for us.”

Codd described how they picked up James Earl Danieley’s old house and moved it across the train tracks to its current location on South Campus across from Holt Chapel.

"CCM brought me friendships and relationships that pushed me to be a better person."

Emily Keller ’19 followed Burke and preceded Lee as president of the organization. Keller also returned to Elon for Homecoming Weekend.

“CCM brought me friendships and relationships that pushed me to be a better person,” Keller said. “They’re my best friends to this day.”

Keller noted how much the program has grown since her first year.

Keller said her best friends from college were in her small group and they still stay in touch. She reunited with many of them for Homecoming, which she said was “so great.”

As Keller turned to talk to a friend, Father Tremblay came by and said “Welcome home. There’s food in the kitchen.”