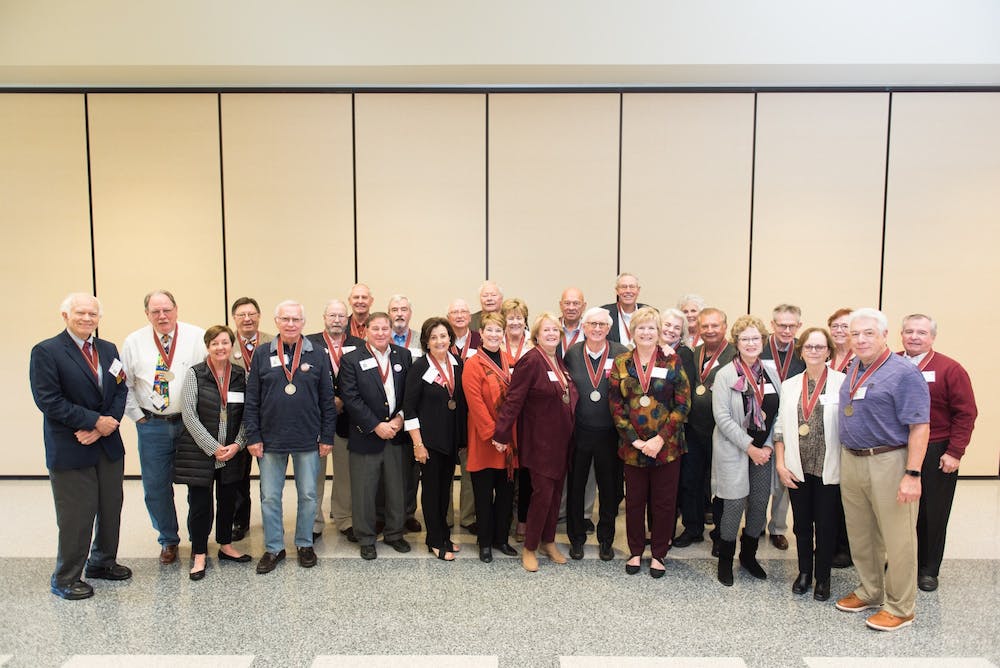 Member of the class of 1969 pose with their Golden Alumni medallions during Homecoming Weekend on Saturday, Nov. 2. Photo courtesy of Madalyn Yates

Fifty years ago, Elon University was a very different campus than it is today.

Students at the time were faced with the presence of the Vietnam War and the beginnings of nationwide anti-war movements, accompanied by the early stages of countercultures such as the hippie movement.

Despite the adversity the U.S. and many young adult students faced, Don Goldberg ’69 still said his experience at Elon was “humbling” and “an absolute blast.”

Elon’s Golden Alumni returned to campus this Homecoming Weekend and, in between luncheons and other celebratory events, shared stories and memories of their time at Elon.

Though the campus itself has changed enormously since 1969, with only a few historic buildings of the time still remaining, Ken Scott ’69 said, “what hasn’t changed is the student relationships and teachers.”

Many of the alumni of the Class of 1969 were pleased to mention the relationships they built while at Elon were the most fulfilling and memorable parts of their time at Elon.

Goldberg and Scott shared laughs while looking back on the room checks and lack of air-conditioning during their time living on campus.

“We had room checks ... and they would come in every week to check our beds and make sure they were clean and they were made!”

Scott also spoke about the education he received both inside and outside of the classroom. He said his conversations with fellow students were as fulfilling as what he learned in classes.

Even though Elon’s mascot at the time were the Fighting Christians, Scott spoke to the relative religious diversity on campus and how this encouraged rich conversation among his social groups.

“I can remember we had a Catholic boy down at the end of the hall,” Scott said. “I’m a Protestant, he’s Jewish, and we would get in the room with others and talk about religion … It was wonderful, a great education which was not in the classroom.”

However, while many alumni reminisced on their good times and the hilarious hijinks of dorm life, Denny McGuire ’69 remembered the gender disparities of college life and the frustrations of being a female student on a college campus in the 60s.

pages of rules were given to female students on their first night in their dorms in the 1960s.

“There was a lot going on in ’69,” McGuire said. “Campuses were changing all over the country, but this one took a long time to change,'' she said.

“They had rules out the wazoo, especially for women,” McGuire said. “There were 20 pages of rules that they handed us the first night if you lived in the dorm ... Guys had only one rule.”

McGuire said there were many restrictions and rules for women at Elon in the 60s, including dress code restrictions that included not being able to wear pants.

“[We] could not wear pants. You could occasionally cheat and roll your pants up above your knees and wear a raincoat. ... We called them ‘magic raincoats.’”

When asked about her thoughts on the 10 p.m. weekday curfew that applied only to female students, McGuire expressed frustration as an adult woman who was being subjected to stricter rules.

“I didn’t like being treated like a child when I was an adult, so that was hard,” McGuire said.

Kaye Savage ’69, president of the Women’s Interdormitory Council at the time, was one woman who fought to change many of the unjust rules that applied solely to women at Elon, including the rigid curfews that female students had to comply with.

“The women were the only ones that had the curfews; the men didn’t have any. So we figured, you know, if they didn’t have any, we at least need to have realistic ones,” Savage said.

"We all need encouragement, and I got a lot of that here."

Savage lobbied her entire junior year with former Dean of Women Theo Strum, claiming that because they were going to be 20 and 21, they should at least be able to stay out until midnight.

Savage and Strum said they were successful in their lobbying and the curfew was finally changed their senior year.

The Class of 1969 reunited over a luncheon, a bus tour of campus and their own Golden Alumni tailgate. They bonded over a shared feeling of nostalgia and life-long memories of their time in college at Elon half a century ago.

Sam Story ’69 said it was this comradery that made Elon so special.

“The most important thing was that people really cared about you. … People wanted you to be successful. ... We all need encouragement, and I got a lot of that here,” Story said.