Behind the police badge 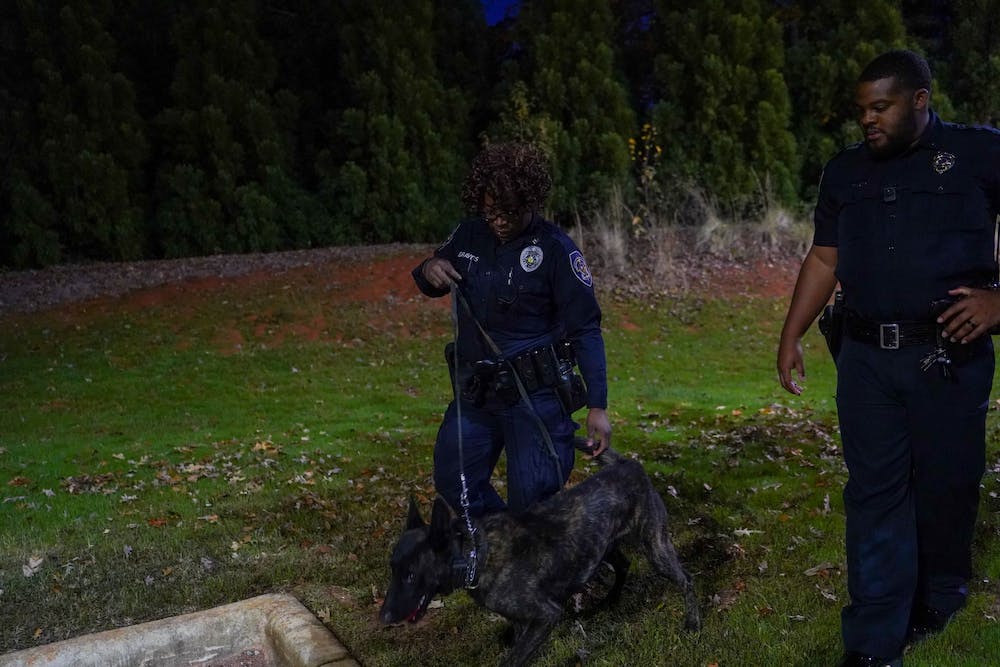 Graves and King are both graduates of North Carolina A&T University, sharing an interest in criminal justice. However, their journeys to the Elon Police Department differ.

Originally from Caswell County, N.C., King’s childhood pushed him to pursue a career in law. He said he remembers when he was a child and his grandfather was killed by a police officer. It was hardships such as this one that directed him to where he is today.

“I had some situations in my family that kind of inspired me to transition — a lot of my family is actually incarcerated. So, it was an opportunity for me to be on the other side of the fence,” King said.

King has been in law enforcement since 2012. After graduating college, King began working in a county jail, which he said taught him the value of communication and gave him a new perspective. With a family history of incarceration, King learned valuable lessons that helped him advance his career.

"This career isn't about taking people to jail. It's actually about helping those in need. When you work in a jail, you see a bunch of those people but they also need some other form of help."

“This career isn’t about taking people to jail. It’s actually about helping those in need,” King said. “When you work in the jail, you see a bunch of those people, but they also need some other form of help.”

Graves took a different path. After graduating from college, she started off in Burlington.

“The call volume is a lot different. On the average night for me, you could do anywhere from 15 to 20 calls for service versus Elon, you’re not going to get that 15 to 20 calls back to back,” Graves said. “I learned a lot in Burlington, and I really feel like Burlington prepared me for being in Elon.”

Life in a college town

Working with a student population presents different challenges compared to working in a city, but both officers said they see this as a unique experience.

Over the years, the population has changed, and the department has had to adapt.

“During the day you don’t deal with students as much, not on a large scale. It’s mostly we deal with them during the night, which makes our other citizens react,” Graves said.

King worked for Elon University Campus Police after his job at the county jail before transferring to the town of Elon Police Department.

“The majority of the people that you deal with on a day-to-day basis are a lot of students, some of which love law enforcement, some of which hate law enforcement,” King said, in reference to his time at Campus Police. “Now, it’s more about branching out into the bigger community. It’s not so much focused on the university in particular– it’s about a focus on everybody.”

The Elon Police Department has been around for 125 years, but it was just this year that black officers were promoted to sergeants.

years of service from the Elon Police Department.

Both Graves and King are grateful for the opportunity but stressed that their race hasn’t been on their minds.

“I don’t really [think about it]. It’s hard for me to even focus on the race aspect of it,” King said.

Graves said they were not aware they were the first black sergeants at EPD until after their promotion.

“I’m honored for the opportunity,” Graves said. She said being promoted has given her confidence to succeed in the department.

Though both Graves and King have faced adversity in their careers as a result of being minorities, they have not let it define their experiences.

“Some people we say we have an issue with law enforcement, but some people have issues with the person in the uniform,” Graves said.

Despite this, neither she nor King thinks that race is the biggest factor in the conversation. The symbolism of the uniform is what holds more weight.

“I don’t think people can see past the uniform sometimes,” King said.

Overcoming past prejudices and establishing better community relations is something that law enforcement agencies struggle with. Ending violence and connecting with citizens is something both sergeants strive for.

“Whatever your experience is, if it’s bad, put it aside and just remember, at the end of the day we’re here to help,” Graves said. “We want everybody — students, citizens — to feel like ‘okay if I have an issue. I want to talk,’ because we don’t want you to wait to the very last minute.”

Despite his family having a complex relationship with the law, King doesn’t hold any grudges. Forgiveness and understanding, he said, will make the community safer.

“If you keep dwelling on the past you will never progress. Believe me,” King said. “The world will be so much better if we just learned to love. That is truly the ultimate sacrifice that everybody has to make.”