A Man of Faith: Chabad’s rabbi is out to serve others 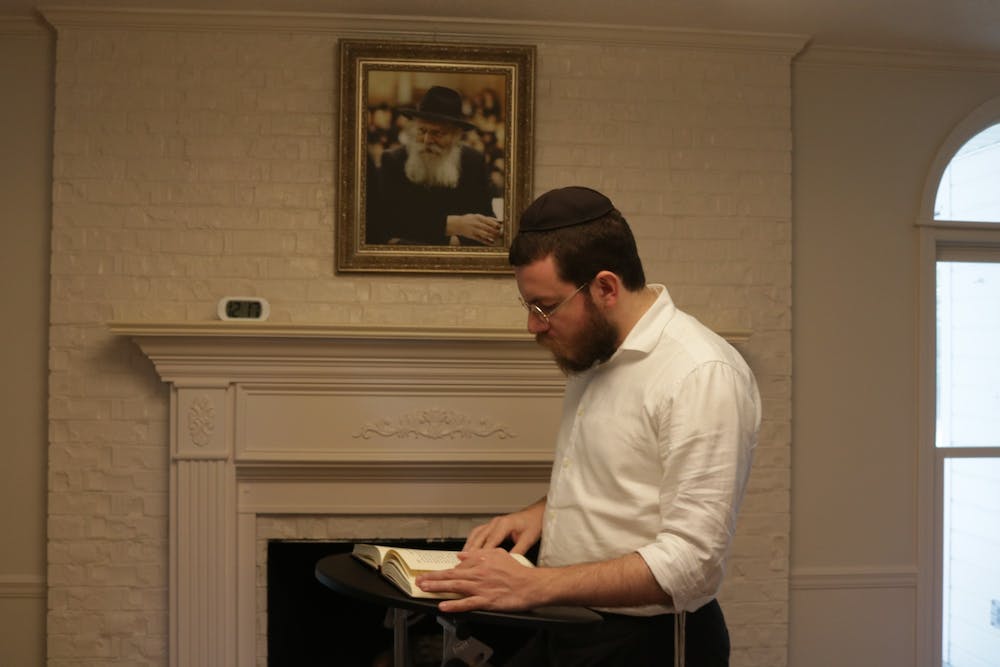 On any given day on Elon University’s campus, a bearded man wearing a yamaka and circle-framed glasses zooms by students on an electric scooter.

That man is Rabbi Mendy Minkowitz, rabbi at the Chabad affiliate group at Elon. The Chabad center, operated out of the home where Minkowitz lives with his wife and three children, is approximately a mile away from Elon’s campus. Minkowitz said he bought the scooter so he could visit his students more often because driving his car and finding parking was a hassle.

“I found that was discouraging me from doing it [seeing students],” Minkowitz said. “I would just be like ‘It’s fine. I’ll do it another time.’ And that had an impact because I would go less on campus. I would see less students, and I didn’t want that.”

Minkowitz and his wife Rivka started Chabad at Elon in December 2015. Born and raised in Italy, Minkowitz moved to the U.S. when he was 14 to study Judaism. He has studied and worked in the field ever since.

Chabad is affiliated with Hasidic Judaism. Minkowitz said there are close to 45,000 Chabad centers around the world, and he estimates that only 250 of those are on college campuses. However, it doesn’t matter if Elon students are Hasidic or not when joining Elon’s Chabad.

His work, according to Minkowitz, is not just for himself. He works for others.

The Minkowitz’s house, for example, serves as both his home and the Elon Chabad Center. The living room attached to the kitchen is filled with toys for his children. Just a step away is the meeting room and dining room lined with folding chairs for Elon students who attend services, meals and classes. The outside of their home is marked with signs and a menorah, letting Chabad members know they are in the right place.

Minkowitz said his mission as rabbi is to spread the message of Rabbi Menachem Mendel Schneerson, the national leader of Chabad, to Elon students. However, he said he and his wife are really “there just to sort of be there for the students.”

“We see them grow from freshman year to senior year, and sometimes we don’t realize how important it is to be there for one another,” Minkowitz said. “Sometimes we find in hindsight, you know, a student who says, ‘You know, that time I really need to talk to someone, and I appreciate that you were there,’ and I or my wife might not even know how important it was that we were there at that time.”

One of those students is Elon sophomore Sami Herbert. Herbert joined Chabad during her first semester at Elon and is now the social chair for the Elon Chabad board.

"They do everything in their power to make us feel like we have a place away from home to feel safe."

Herbert’s mother is Jewish, but her father is Catholic. Because of this, she said her experience with Judaism is different from others.

Herbert said she was hesitant to join Chabad, fearing it may be too religious for her. However, she said Minkowitz, known to students as Mendy, accepts students no matter who they are, and he quickly became a resource to her for learning more about herself and her faith.

“Mendy was just a great leader and role model for me to really continue developing my Jewish identity and to continue my learning process of what it means to be a Jew as a woman, as a millennial,” Herbert said.

Minkowitz and his wife moved to Elon from New York where Minkowitz worked at Chabad’s headquarters in Brooklyn. Minkowitz said the headquarters were aware of the growing demand of prospective and current Elon parents for a Chabad center at Elon. In the past, Elon students were going to the nearest Chabad in Chapel Hill for a sense of community.

“They were turning to Chabad headquarters and saying, ‘Hey, my son or daughter is looking at Elon, and there’s no Chabad there’ or, ‘Are you guys looking to send someone?’” Minkowitz said.

Minkowitz said the couple was already looking to cultivate a space for Jewish students and members of the community. After a few visits, they packed up their belongings and moved to Elon.

Daniela Nasser, an Elon senior, is one student who benefited from the move. She said the opening of the Chabad center in 2015 reassured her that there was a diverse group of Jewish people on Elon’s campus when she was applying for college.

Nasser said she started her sophomore year looking for something different, so she took one of the classes Minkowitz teaches out of the Chabad center.

“If it weren’t for Chabad, I don’t think I would have been able to get my religious fix here at Elon,” Nasser said.

Minkowitz said living in North Carolina is different than a city like Brooklyn because there are fewer like-minded Jewish people in the area. However, he said North Carolina is a beautiful place for his three children.

Specifically, Minkowitz said his five-year-old son, Meir, already has a sense of duty. When students or guests come over, Minkowitz said Meir tries to teach them what he knows about Judaism.

“That’s very powerful because my son gets that sense from living here and a place where he’s in a situation of leadership, if you will, even though he’s five, and he’s not a leader in a real capacity,” Minkowitz said. “He gets that we are here with a mission to [support] others, and he feels the same way.”

Recently, Chabad at Elon was in the news after gunshots were fired outside the center as students and Minkowitz’s family broke their fast to celebrate Yom Kippur.

Minkowitz said while he is helping the town of Elon Police make sure it never happens again, his job, now more than ever, is to make sure students feel a sense of physical and emotional safety at Chabad.

Truitt Drive, where the Chabad center is located, was shut down on the night of the incident. Minkowitz said he received several texts from current and past students asking if everything was okay.

“I didn’t want to tell the students everything’s okay and potentially put them in harm’s way by pretending that there’s no danger,” Minkowitz said. “I also didn’t want to alarm students and tell them there’s some kind of impending danger on us. So, I had to sort of walk this fine line at the time of neither quelling their fears nor, you know, amplifying them.”

Jon Dooley, vice president for student life, is one of the guests whom Meir has taught about Judaism. This was during Chabad’s Shabbat dinner after the incident, and Dooley said he appreciated the opportunity to attend this particularly meaningful event.

“The work that Rabbi Mendy and Rivka are doing with Chabad continues to enrich the Elon student experience and contribute to a thriving, pluralistic Jewish community at the university,” Dooley said.

Herbert, who attends Shabbat dinner every Friday, said one of her favorite anecdotes from these weekly dinners are Minkowitz’s “dad jokes.”

“Anytime he’s making a speech, he’ll start off with: ‘I promise this will only take two minutes,’ but then ends up taking 10 minutes,” Herbert said. “And of the 10 minutes, about seven of them are spent trying to make a joke, and sometimes they’re funny. Most times they’re kind of cringy.”

Herbert said she always laughs because she genuinely appreciates him trying to relate to his students.

“Mendy is so involved with our journeys as students, as people, as young adults,” Herbert said. “He is always making himself available for us.”

Looking back at her time at Elon, Nasser said Chabad has become her home. She said she appreciates Minkowitz’s work to get Chabad acknowledged by the university as an on campus group and “loves to hype him up.”

“They always reach out to me and make sure I’m doing well,” Nasser said. “When I was abroad, they made sure to reach out and see how I was doing and that I had a place to go for the holidays. They have brought me food when I’m sick and know my family too. They are my extended family.”