ELON EATS: A family frankfurter stand with a bratwurst business 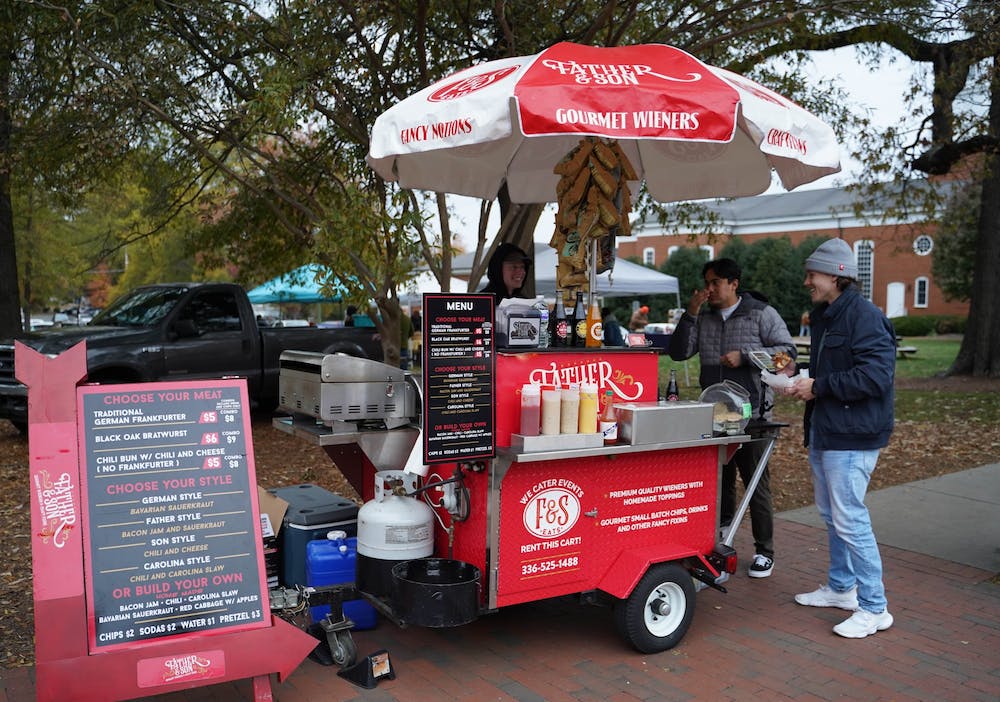 Photo by Clare Grant | Elon News Network
Father & Son hot dog stand visited Elon on Thursday Nov 14 . On this visit, it was ran by Case Kooy during his fourth visit to Elon.

After living in New York City for years, Britt Bradford has realized his dream of selling northeastern-style frankfurters and bratwursts to a local North Carolina community.

Bradford is the owner of the “Father and Son Gourmet Weiners & Craft Fixins,” a frankfurter and bratwurst stand that sets up shop in the town of Elon on a weekly basis.

“I lived in New York City for years and there’s a cart on every corner and I thought, ‘there’s not anything like this in North Carolina,’” Bradford said. “I thought there might be a hole to fill in the marketplace.”

“The folks from the North, including Wisconsin and the Midwest, they appreciate a really good bratwurst,” Bradford said. He said he wanted to combine northeastern-style sausages with southern cuisine.

“That’s why we have Carolina style, which is homemade chili and homemade coleslaw, as well as Bavarian kraut,” Bradford said. “We really have the toppings covered. I really did think there would be much more of an appreciation at Elon than other state schools.”

Bradford said he wants to make this stand his main priority, but acknowledges the difficulties of finding help to expand his business. He said he hopes to focus on his passion for selling high-quality frankfurters and bratwursts.

However, he said he has no interest in opening up a permanent store.

“I don’t think I would ever want to have a brick and mortar store. I love the idea of being mobile; I can buy a new cart for $5,000 and be ready to roll,” Bradford said. “I don’t feel like I need to have that. I don’t want it to get so big that I don’t enjoy it. I want to keep it small and continue to do all the cooking.”

Bradford said it is difficult to have a specific schedule for coming to Elon ‘s campus. He works with Case Kooy, a local student, who has been with the stand for about a year and a half.

Bradford said he loves working with Kooy, calling him his “cart co-pilot.” He said Kooy is someone he can rely on and is one of the most capable workers he’s known.

According to Kooy, this week will be the cart’s fifth time at Elon.

“We felt like posting up at Elon would be a great idea,” Kooy said.

"I would love to eventually dedicate a cart to Elon. everyone has been really kind and welcoming."

Founder of "Father and Son"

Bradford said he hopes to continue working around the university catering parties and events.

Bradford said he is lucky to work in the town of Elon and get to know the students and locals.

“I would love to eventually dedicate a cart to Elon,” Bradford said. “Everyone has been really kind and welcoming and we appreciate more than you can imagine. We were a little nervous the first time we came out, but everyone has been just fantastic.”

His dream for the business was for his three sons to ultimately take over the stand, which is why he named the business “Father and Son.”

But soon after opening, he realized his sons had no interest in the wiener business.