CHEAT SHEET: United States pulls out of Syria leaving Kurds to fend for themselves themselves 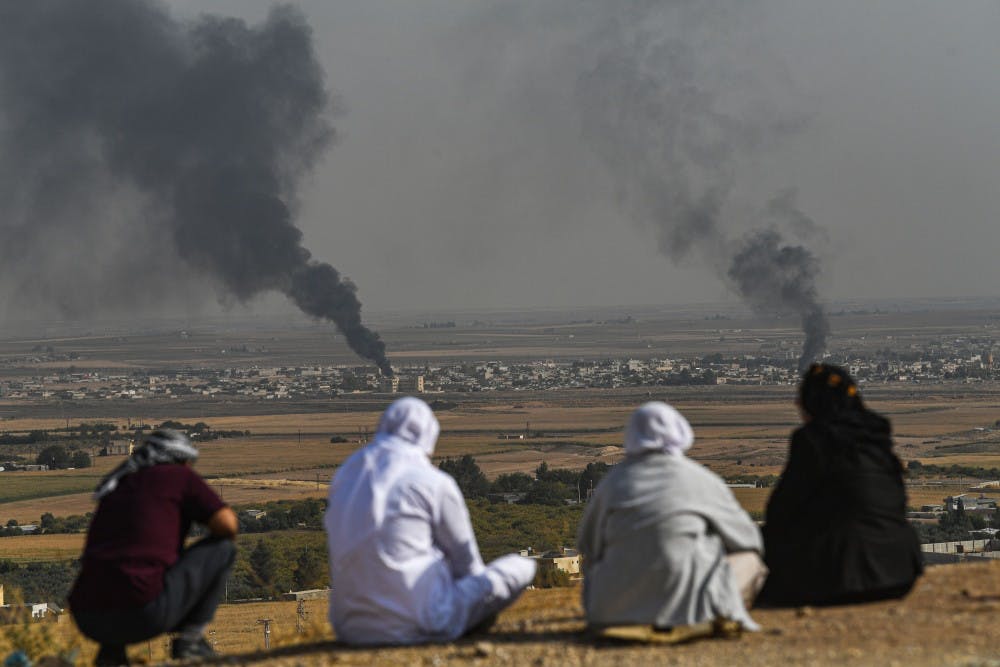 People look on as smoke rises from the Syrian town of Ras al-Ain, in a picture taken from the Turkish side of the border in Ceylanpinar on October 11, 2019, on the third day of Turkey's military operation against Kurdish forces. - Turkey will not stop its operation against Kurdish militants in northern Syria, President Recep Tayyip Erdogan said Friday, dismissing what he called "threats" from other countries. (Photo by Ozan Kose/AFP via Getty Images/TNS)

The Kurds, an ethnic minority group that claims land in Turkey, Iraq, Iran and Syria, are currently at war to form an independent state in the Middle East. During the rise and fall of the Islamic State of Iraq and Syria, the U.S. militarily supported the Kurds in their fight against the terrorist organization. After the fall of ISIS’ last strong hold, the U.S. announced the end of its military support — leaving the Kurds surrounded by hostile nations no longer unified in the fight against ISIS.

Turkey, a country that will lose its southeastern region if the Kurdish state is established, has deployed military units to defend its borders. The backlash of this military intervention and President Donald Trump’s comments on social media have left the region in turmoil.

Baris Kesgin, assistant professor of political science and policy studies, currently researches leadership and decision-making in Israeli and Turkish foreign policy. Originally from Turkey, Kesgin explains the complex history that has led to current unrest in the Middle East.

Q: What has brought about the current Kurdish movement to form an independent state?

A: This power struggle is among many different actors or their respective leaders. First and foremost, the costs are civilians. We have been witnessing one of the most horrible tragedies of humankind in Syria in the past many years — a tragedy that could have been eased if not resolved. Millions of human beings are affected by this ongoing power struggle: nearly a million are killed, millions are displaced and millions took refuge — Assyrians, Kurds, Turcomans, and others; Christians, Muslims and people of other faiths.

Kurds are a stateless ethnic group and are spread out in Iraq, Iran, Syria and Turkey. They also have diaspora communities in Europe and elsewhere. To some accounts, Kurds are the largest ethnic group without a state.

Most Kurds are in between two rivers, the Tigris and the Euphrates. The largest Kurdish population is in Turkey. Historically, Kurds have been oppressed by most of these regimes. For instance, Iraq’s former dictator Saddam Hussein pushed about 1 million Kurds into Turkey in the late 1980s, early 1990s.

It is futile to think about Kurds as a homogeneous group in the context of the present-day debates. Kurds in Iraq have attained an almost independent status and were close to holding an independence referendum only a few years ago.

Despite Kurds having seats in the Turkish parliament since the 1990s, Kurds in Turkey have long been discriminated politically and socially. To many Kurds in Turkey, Abdullah Ocalan is a major Kurdish figure. Ocalan led the Kurdistan Workers Party (PKK), which is recognized as a terrorist organization by the international community. Ocalan has been in prison since 1999.

Kurds in Syria are organized under the Syrian Democratic Forces and a military wing under this, the YPG. Turkey claims that the YPG is an affiliate of the PKK — hence are deemed as terrorists by the Turkish government.

Turkey is a treaty ally of the U.S. — both are members of NATO. The U.S. has also had an amicable relationship with various Kurdish groups and recently worked with the Kurds in Syria in the fight against the Daesh, also known as the Islamic State of Iraq and Syria.

There are about 3.6 million Syrian refugees in Turkey. There were many civilian casualties on the Turkish side of the Turkish-Syrian border during the many years of the Syrian conflict.

Q: What role has the U.S. traditionally played in supporting the Kurdish movement?

A: The U.S. is involved in many, if not all, of the matters that involve Kurds in the present day. In the aftermath of the Gulf War, the U.S. led the efforts to create a no-fly zone over northern Iraq, which effectively led to the emergence of an autonomous Kurdish region inside Saddam Hussein’s Iraq. This eventually brought about a pseudo-state there. In the aftermath of the 2003 Iraq War, Kurdish Iraq emerged as a relatively successful entity under the transitionary, post-Saddam Hussein Iraq.

Q: What is the U.S.’ current foreign policy toward the Kurdish movement?

A: It appears it is a policy of convenience. The U.S. likely lost all its credibility with the Kurds at this moment. That being said, to the actors involved, I don’t think there is much surprise here thus far.

Q: How has the rise and fall of the Islamic State affected the Kurdish push for independence?

A: One may read that the rise and fall of Daesh provided an opportunity for an independent Kurdish state. However, the other side of the coin is that there has been a greater war fought in Syria — the one involving Iran, Russia and the U.S. In the earlier phases of the Syrian conflict, the U.S. pursued a distant policy under the Obama administration. However, simultaneously, it sought to delegate the regional balance and later the fight against Daesh to the Sunni countries in the region: Qatar, Saudi Arabia and Turkey.

Q: How is this involvement being received internationally and nationally?

A: The current Turkish operation into Syria is heavily criticized internationally. The Turkish government faces an uphill battle to convince any actor outside Turkey. There were few statements of support. I recall Pakistan as the only one. Domestically, this plays the nationalist tunes Turkey’s President Erdogan has been voicing in the past years. For Erdogan, this operation serves his domestic political agenda. On another note, Turkish military has already been in Syrian sovereign territory since the Operation Euphrates Shield in 2016.

There were major disagreements between the U.S. and Turkey during all phases of the conflict. Turkey occasionally voiced to topple the Assad regime. There was no such desire to intervene in Syria on the part of the U.S. In an attempt to fight Daesh, all countries aligned with various armed groups on the ground. The U.S. established ties with the Kurdish factions. Turkey aligned itself with some factions in Syria that many considered extremists. In doing so, until about two to three years ago, Turkey did not monitor its border with Syria closely. This, in turn, allowed extremist organizations to infiltrate into Turkey.

Q: How will current Turkish military involvement change the landscape of the Kurdish movement?

A: Turkey’s occupation of northern Syria will surely change the landscape of the region. We have started to witness some major changes already. First, Turkey expanded its presence south of its border. Second, the Kurdish forces are now reportedly cooperating with the Syrian military, and there are recent reports the Syrian government had assumed control in parts of these territories that were under Kurdish control. Third, there are reports that the Daesh/ISIS prisoners held captive have escaped in the midst of these events. There are legitimate worries that these former Daesh fighters will bring back the brutal Daesh terror, which the Kurdish forces and the coalition had successfully quelled.

Q: Will Turkish military involvement in Kurdish-controlled territory affect the approximately 500,000 Turks in the U.S.?

A: In recent spars between the U.S. and Turkey, there have been visa restrictions, sanctions on officials and interruptions to flights between the two countries. Such matters can possibly impact any and all.