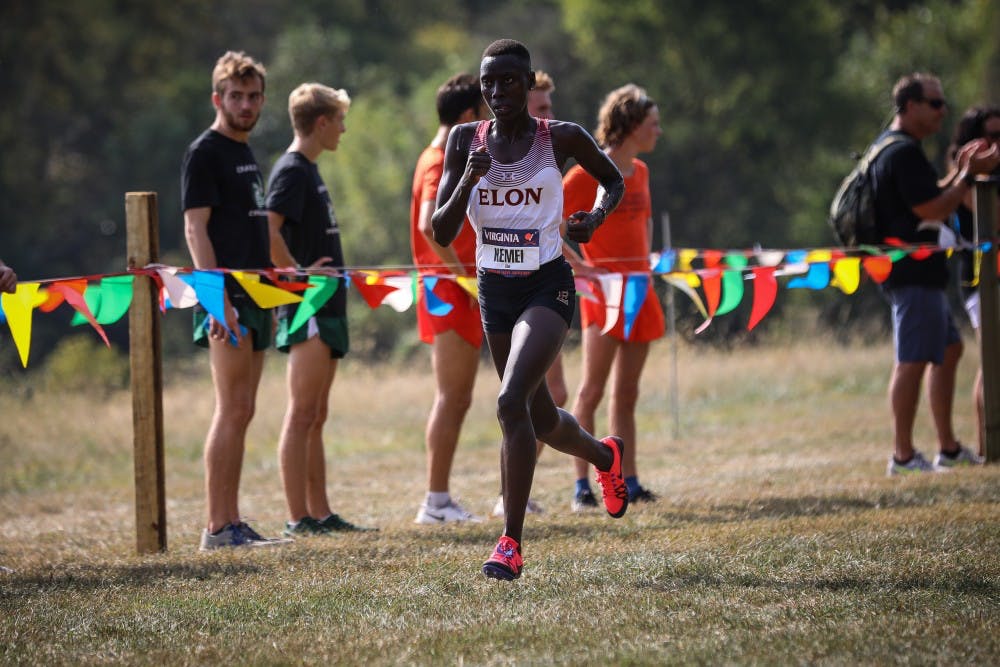 Senior Scolasticah Kemei runs in the Panorama Farms Invitational in Virginia where she set the new school record for the 6-kilometer race. Picture courtesy of Troy Sayles and Elon Athletics

Senior Scolasticah Kemei is one of the top cross-country runners for the Elon University Phoenix. Though Kemei’s run through the competition has seemed effortless, her path to get to this point was anything but that.

Originally from Kenya, Kemei started her collegiate career at Mississippi Valley State University where she was the school’s top runner. Kemei won back-to-back Southwestern Athletic Conference cross country championships in 2017 and 2018. Despite her success, Kemei knew that to keep pushing herself, she would need a change in scenery.

“When I was in Mississippi, I was the best player, and I felt like there was no competition,” Kemei said. “I was always leading, and I felt like it was getting boring, because I needed to do much better. And it’s very hard to do better when you have nobody to compete.”

Kevin Jermyn, track and field coach, found Kemei while searching through the NCAA transfer portal ahead of the fall 2018 season. His research on the runner revealed her impressive results, but what was more striking to him was the lack of support Kemei had at MVSU.

Jermyn said that in the last year Kemei was at MVSU, her coach was removed from the position, leading Kemei to run without a coach for most of the season.

“This is a kid that looked like she was running pretty well. But it seemed like this is not a normal situation where this person is getting high-level, advanced support on a day-to-day [basis],” Jermyn said. “They’re just out there doing the best they can on our own.”

is the new school record for the 6k as of Sept. 27 when senior Scholastica Kemei beat the record during a race at the Panorama Farms Invitational.

The transition to Elon was not easy. Kemei had to get used to a new American school for the second time in three years while also adapting to a much more intense running program.

Kemei recalled her first time lifting with the Elon team.

“When it comes to strength training at the gym, I was really weak. It was very hard for me even to lift … the lightest weight,” Kemei said with a chuckle.

Kemei competed in the 2018-19 indoor season for the Phoenix and put her raw talent on display. She won the 3,000-meter race at the Virginia Tech Challenge and was a part of the 4x800-meter team that posted the second fastest time in Elon history at the ECAC Indoor Championships.

Despite Kemei’s success in the winter, Jermyn made the decision to hold her out of the spring outdoor season. Jermyn said that though she had successes, they were not consistent, so he wanted her to take time to build up consistency.

“She probably [could have] helped us in the mix to contend for a conference championship in track, but I really I had a feeling that there’s a superstar potential in there. And we were only seeing good at that time,” Jermyn said.

Kemei is off to a fast start in the fall. The women’s cross-country team placed fourth at the Panorama Farms Invitational on Sept. 27. Kemei won the 6k for the Phoenix with a time of 20:44, a new school record.

Kemei has also been named Colonial Athletic Association Women’s Cross-Country Runner of the Week three times this season, on Sept. 3, Sept. 17 and Oct. 1.

Kemei and the Phoenix are rolling through the cross-country schedule. The team is currently ranked eighth in Southeast Region, according to the most recent poll by the U.S. Track and Field Cross Country Coaches Association (USTFCCCA), but Kemei and the Phoenix have higher aspirations.

“We have a very strong team we have coaches who are committed to helping us, facilities and everything. And I feel like there’s nothing that’s going to hinder us from winning the championship,” Kemei said.