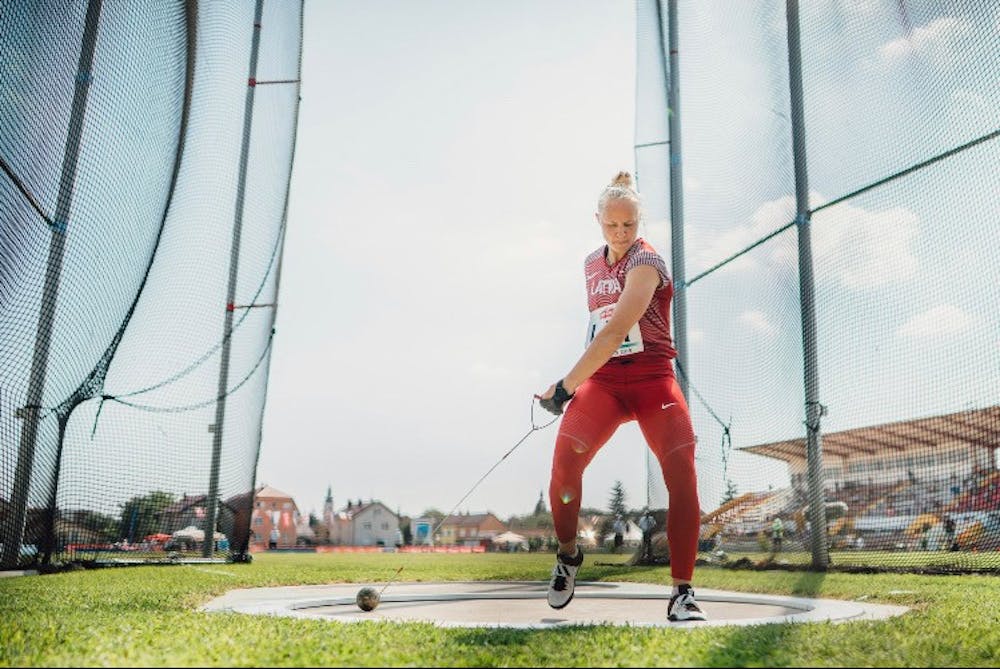 The throwers of Elon’s track and field team can now say they are coached by one of the top 30 throwers in the world.

Assistant track and field coach Laura Igaune competed in the 2019 IAAF World Athletic Championship in Doha, Qatar on Sep. 27. Igaune finished 12th in the Group B qualifier. Her 67.77-meter hammer throw was the 22nd best mark in the qualifying group of 30 athletes.

“When you’re a student athlete, or even athlete on any level, you’re not going to be satisfied with the result, ever. It’s just you striving for more wanting more,” Igaune said. “I would have liked to finish a little better, but I’m satisfied with [the] experience...”

Igaune is not new to international competitions. In her home country of Latvia, she grew up watching track on TV and from a young age determined that was the crowd she wanted to be part of.

Igaune competed as a member of the Latvian junior and national team and still holds the national record for the hammer throw at 71.61 meters. However, even the most seasoned veteran felt intimidated by competing at the world championship.

“It was phenomenal. It was completely unique. It’s something that I’ve never done before,” Igaune said. “Obviously, it was the biggest championship the biggest meet of my career so far. So, it was a steep learning curve for me to go there and compete. And it’s obviously it’s not your local Phoenix invitational.”

Igaune traveled around 16 hours by plane from Elon to Philadelphia to Madrid and finally to Qatar. Once she landed, she not only had to prepare to compete against the world’s best hammer throwers but also against the conditions of Qatar itself; Doha is seven hours ahead of Elon, with average temperatures reaching over 100 degrees during her time there.

The trip to Qatar was also at a different time in her career. Prior to the 2019 World Championship, it had been nine years since Igaune had represented Estonia.

“When I started competing on [the] national team, people were older, so they have retired. And now I’m the one that’s now older and I’m seeing new people coming in,” Igaune said. “The new ones you kind of welcome them because, you know, they can be following your footsteps and stuff like that. So, it was kind of refreshing.”

A big difference this time around for the Latvia native was training. Igaune had to fit time in for a world-class training regimen between her full-time job as an Elon coach, a job that isn’t a traditional 9-to-5 to begin with. Her training often took place at the crack of dawn before Elon’s 7 a.m. practices or after a full day of work.

"She's practicing by herself in the dark before everybody else even comes to practice. And we practice early before the rest of this campus gets up."

“She’s probably one of the hardest working people I’ve ever seen,” said fellow track and field assistant coach Kevin Jermyn. “She’s practicing by herself in the dark before everybody else even comes to practice. And we practice early before the rest of this campus gets up. So, she deserves everything she gets based on her work ethic.”

For Igaune, this opportunity to compete at a world-class level was not only a chance to represent her home nation, but Elon as well. She also said the world championship was a unique opportunity to network with coaches from other U.S. colleges and institutions.

Igaune believes that by competing internationally, she improves the reputation of Elon athletics, especially track and field.

Ultimately, the accomplishments of Igaune come back to Elon’s track and field team. The success of their coach raises the “standard of excellence” at Elon.

“It helps me and student athletes a lot that I have competed, and I’m still competing in a … higher level. They see the path to success… If you do it, you will succeed,” Igaune said.